This post focuses on my work to digitize and transcribe Western MS 82, a major canon law text, describing some of the goals of this project as well as to indicate why this particular text should be of interest to the scholarly community and hence, why its introduction into broader circulation is particularly warranted. I then conclude with a brief note updating my work to produce a new, expanded version of the Libraries’ webpage Papal Documents: A Finding Aid.

Western MS 82, currently preserved in the Rare Book & Manuscript Library of Columbia University, is the most de luxe one of the six surviving manuscripts of Collectio Sinemuriensis, or Semur Collection. Modern-day scholars generally consider the second recension of this collection to be the earliest “Gregorian Reform” canonical collection, which embodies the spirit of the great Church reform movement of the eleventh and twelfth centuries. According to Linda Fowler-Magerl, the initial version of this canonical collection was composed at Reims at the close of the tenth century. While we know something of this first version, many of its canons have not survived. The second version, however, is better attested. There are six surviving examples of the second iteration, which date from the second half of the eleventh century and the early twelfth century. The earliest, most complete of these extant manuscripts, MS Semur-en-Auxois, BM M. 13, has given the collection its name. Columbia’s Western MS 82 seems to have been copied during the first decades of the twelfth century in northern France. To date there has been no critical edition or systematic study of either the Collectio Sinemuriensis or of Western MS 82.

Columbia acquired Western MS 82 in 2004. At the end of last year (2015) the manuscript was scanned into high-resolution images by the Preservation and Digital Conversion Division of Columbia. My project on this manuscript aims at producing a digital transcription that preserves nearly all the scribal and spelling features of the manuscript to provide historians, paleographers and medievalists not only with the contents of the full text but also textual clues that can provide valuable data for paleographical, linguistic, and historical investigations.

Western MS 82, as a parchment manuscript, comprises 15 quires and 119 folios, with the first folio and the last two folios of the last extant quire missing. On the verso of the first flyleaf, an eighteenth-century annotation indicates that this manuscript contains “Notitia provinciarum ecclesiasticarum Galliae“, also known as Notitia Galliarum, and “Collectio canonum“. Texts on the first nine folios, composed of the Notitia Galliarum and the capitulatio, a list of the rubrics of the canons in the collection, are laid out in two columns. The remaining text on ff. 10-119, i.e., the canons themselves, are written in single column. The canons are grouped into three books. Each book begins with an exaggerated and decorated initial (on folio 10r, 49v and 99v) that is nine to twenty-one lines high. The bodies of the canons are copied in a neat book hand. However, the rubrics of the canons, which are written in red ink, are very probably later add-ons, as they are often written in uneven lines at the end or even on the edge of paragraphs, and are enclosed by a curled line drawn on the left side of them to distinguish them from the canons. The script has an appearance of early stage Proto-Gothic.

Compared with other manuscripts of the Collectio Sinemuriensis, one of the most significant and intriguing features of Western MS 82 is that it opens with Notitia provinciarum ecclesiasticarum Galliae, a list of metropolitan cities and provinces of Gaul 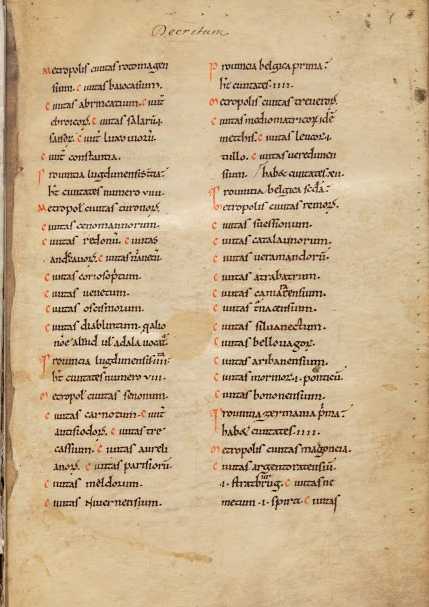 We do not have the first half of the list as a result of the missing first folio. Nevertheless, the surviving second half of the document, as well as the very fact that the compiler(s) of Western MS 82 chose to incorporate this document, raises many questions and invites further examination. This document, also known as Notitia Galliarum, was originally composed between the late fourth and the very early fifth century, before the massive Germanic invasions by the end of the first decade of the fifth century that isolated much of Gaul from the remainder of the fracturing Western Empire. There is still wide debate as to whether Notitia Galliarum was initially created out of administrative interests by a political institution or by a local church. Nevertheless, the earliest manuscript of this document, dating to the seventh-century, contains in its rubric “ut ordo exposcit pontificum” suggesting that at least since the early Middle Ages, Notitia Galliarum has been regarded and employed as a religious document mapping an ecclesiastical space 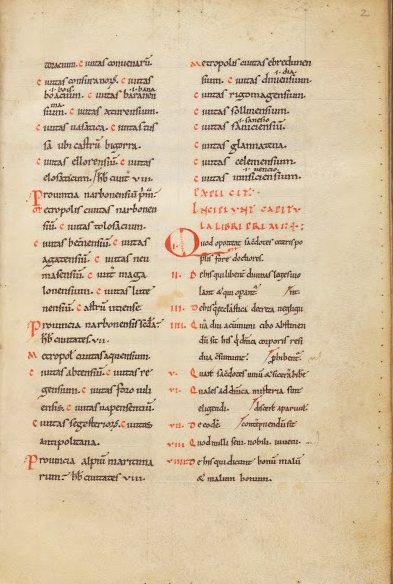 The Notitia appears in several medieval canonical collections. There are, nevertheless, several peculiar facts about the specific version included in Western MS 82. In the first place, of all the surviving manuscripts of Collectio Sinemuriensis, only Western MS 82 incorporates this document. Further, while versions appears in other texts have been updated, this version appears to have retained its late antique form almost entirely. In other words, it was not updated to represent the actual provincial configuration of early twelfth century France. Only two new cities, civitas Nivernensium and civitas Nundunum, were added to what is found in the oldest extant version, included in a seventh-century manuscript. Some cities included in the list were not actually not bishoprics during the eleventh to the twelfth century, e.g., civitas Oscismorum, civitas Diablintum, civitas Bononensium and civitas Tungrorum. Why did the patron of Western MS 82 want such a “dated” text to stand at the beginning of the manuscript? Why did he invoke the ancient divisions of Gaul? What kind of a “conceptual territory” did he envision this canonical manuscript to represent? There may never be precise answers. Two hypotheses, however, could be employed to conjecture.

The first possibility is that this text is a product of territorial conflicts in northern France between ecclesiastical institutions. These were certainly common in the high Middle Ages. The patron of Western MS 82 might have requested the incorporation of old Roman texts, such as Notitia Galliarum, to buttress his territorial claims. The second possibility is that this ancient document, together with the lands of Gaul that it delineates, may have nothing to do with the real space, but that the patron of Western MS 82, by incorporating in the manuscript an ancient text that depicts the administrative system of the area, sought to invoke a sense of authority.

Both of these possibilities point to an emphasis on the authority and legitimacy manifested through antiquitas. Such emphasis is further accentuated in this manuscript through canons like the one that opens the second book (ff. 49v – 50r), where the initial letter P is exaggeratedly decorated (twenty-one lines high with a form of a bird or dragon vomiting tendrils and flowers). The red-ink rubric of the canon reads “Quod non liceat apostolicis successoribus constituta predecessorum infringere.” This canon, possibly drafted by Hincmar of Reims, is ascribed to Pope Symmachus (r. 498-514) and prohibits the successors of the ancient popes from abrogating the administrative and legal decisions of their predecessors. 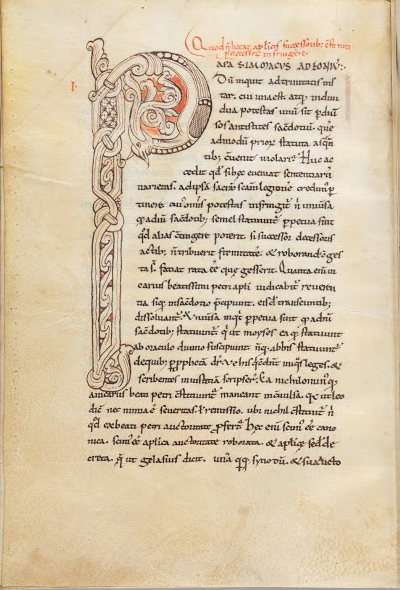 At the same time, Western MS 82, through this specific canon, appears to have employed antiquitas to suppress, rather than buttress, the legislative power and ecclesiastical rights of the contemporary papacy. Such a feature would seem to distinguish this canon law manuscript from the kind of canonical collection likely to be favored by the reform papacy of the eleventh and the twelfth century, which generally asserted the intrinsic juridical power of the popes. Hence, modern scholars’ widely shared view of this canon law manuscript being essentially a product of the Gregorian Reform may have oversimplified the character of Western MS 82. Last but not least, this canon, together with other canons in this manuscript, appears to indicate a connection between Western MS 82 and Reims. These facts about this manuscript seem point us to the historical political tension between the archiepiscopal see Reims and the papacy, and the power relations between Rome and Reims during the Middle Ages.

The digital transcription of Western MS 82 will hopefully make this this manuscript more accessible to such investigation. The framing of the transcription with XMLtags in accordance with the rules of the Text Encoding Initiative will also hopefully enable users of the project to easily navigate and position themselves within the canons, to search for specific terms and variants within the codex and retrieve data in a more orderly fashion, and eventually to more easily conduct comparisons between Western MS 82 and the other surviving manuscripts of Collectio Sinemuriensis.

In closing, I should note that my project of updating the Papal Documents finding aid is under its final review. Most of the entries now have an annotation which introduces and summarizes the work. In addition, structure of the whole document has been adjusted to enhance its navigability. The “Background Bibliography” part has been considerably augmented, in order to help researchers and students to grasp the significance of individual works, and the history and terminology relevant to the study of papal documents.