On Friday, February 28th, 2020, the Columbia University Libraries presented a pop-up exhibition at the Faculty House called “Al-Mutanabbi Street Starts Here”, showcasing a newly acquired collection of artists’ books, broadsides and prints. The exhibition was held in conjunction with a two-day conference on Iraqi Studies, the first such conference in New York City in more than a decade. Organized by three graduate students at Columbia– Zeinab Azarbadegan, Natasha Pesaran, and Amnah Almukhtar– and sponsored by a number of departments, centers and institutes at the University, the conference brought together experts on Iraqi Studies, and was very well attended. 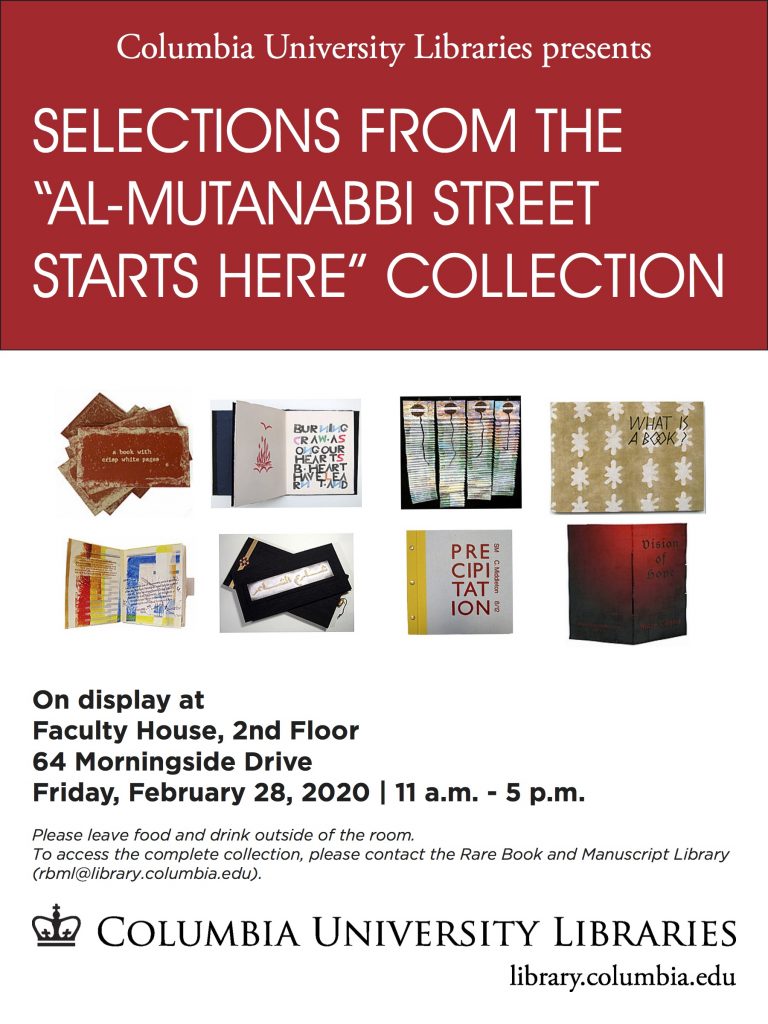 “Al-Mutanabbi Street Starts Here” is the name of an arts initiative and archival collection that was conceived as a response to violence and as a gesture of international solidarity and affirmation of our shared humanity, and the collection is currently in the process of being donated to RBML by its founder Beau Beausoleil. To give some context, on March 5 th, 2007 a car bomb exploded in al-Mutanabbi Street in Baghdad, killing 30 people and wounding 100. Beau Beausoleil, a bookseller and poet residing in San Francisco, together with a fellow educator/printer Kathy Walkup, reached out to other letterpress printers for a response to the bombing of al-Mutanabbi Street. In just a few months, Beau and Kathy had gathered work from 43 letterpress printers. By 2008, Beau came to realize that he wanted to continue the project and not limit it to the reading and show of broadsides that they had gathered. At that point, Kathy left the project, and Sarah Bodman, an artist/educator at UWE, Bristol, U.K., who is the Senior Research Fellow for Artists’ Books at the Center for Fine Print Research (CFPR) got on board. Sarah and Beau worked on a new artists’ book call (An Inventory of Al-Mutanabbi Street), addressing artists, writers, and readers across the globe to express their solidarity with the Iraqi people, and “commemorate not just the tragic loss of life, but also the idea of a targeted attack on a street where ideas have always been exchanged.” In fact, Al-Mutanabbi Street was not only the heart of book selling in Baghdad, but also of cultural and intellectual life and exchanges generally, and this across centuries: it was the urban site of scribes and librarians and booksellers in Abbasid Baghdad, which was known for its distinguished centers of learning, its unique, broad and deep libraries, its thorough bibliographers (such as the renowned librarian/bibliographer/warraq Ibn al-Nadim a 10th-century biographer of Baghdad who left us a unique bio-bibliography encyclopedia Kitāb al-Fihrist —‘The Book Catalogue’– of what was published/read and of who is who in Abbasid intellectual circles); its renowned cultural centers and its deep respect for and love of books and of the written and spoken literary word. It is in Al-Mutanabbi street that Suq al Warraqin, the market of the paper-makers/paper bibliographers and manuscript scribes was located; and of course, the street was named after the famous Abbasid poet, al Mutanabbi (Abū ṭ-Ṭayyib ʾAḥmad bin al-Ḥusayn al-Muṫanabbī al-Kindī) (915 – 23 September 965 CE), perhaps the Arab poet par excellence, whose wit, eloquence and poetry gained him unparalleled fame and power, and who embodied pride in the Arabic language and heritage through his poetry and whose beautiful carving of the word has no parallel and still exerts sway over people’s imaginations and cultural production in the Arabic language. Al-Mutanabbi Street is the place from and onto which ideas, writing and publications flew within the Arab world for centuries.

The response to Beau and Sarah’s call to express solidarity through art and book-making was swift, and within two years the project counted some 130 broadsides, thus paying homage to the 130 wounded or killed persons in the blast. The project then expanded through a call to symbolically “recreate” the inventory of the books sold on Al -Mutanabbi street, and to work on creating a “shared cultural space”. An effort to deposit a copy of some of the broadsides created into the  Iraq National Library was initiated. A sustained effort to exhibit the artworks and books across geographic locations internationally was also upheld in the years to follow: Al-Mutanabbi street starts here exhibited extensively in the U.S. and the U.K. as well as in Baghdad, the American University in Cairo, in Venice, Italy, the Netherlands, as well as in Sweden. A previous exhibit was held in NYC in 2013, and the Columbia University Libraries was a participant host to that exhibit, along a number of other city institutions, including the Center for Books Arts, Alwan for the Arts, the International Print Center New York, etc.. Peter Magierski, the Middle East and Islamic Studies Librarian coordinated this event at Columbia, and all the exhibit spaces, including the main one at the Center for Book Arts was coordinated by Alexander Campos, Executive Director and Curator at the Center. An accompanying anthology of poetry and prose, Al-Mutanabbi Street Starts Here, was published by PM Press in 2012, and was edited by Beau Beausoleil & Deema K. Shehabi , in addition to several other contributing editors, including Sinan Antoon, Summer Brenner, Julie Bruck, Jordan Elgrably, Persis Karim, Rick London, Dunya Mikhail, Bonnie Nish, Maysoon Pachachi, Rijin Sahakian, Zaid Shlah, Louise Steinman, Sholeh Wolpé, and others. 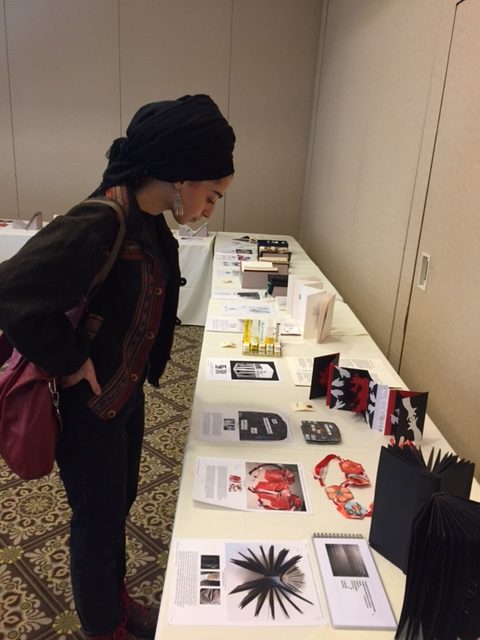 The pop-up exhibition on Friday was  curated by RBML and Global Studies: it  showcased a diverse array of items from the collection. Participating artists employed a wide range of artistic techniques and skills, from traditional paper-making to high-tech and experimental bookmaking techniques of overlaying and mixing mediums, formats, shapes, tools and designs. The artists and writers also tapped into a wide range of ancient and contemporary texts in different genres and languages, all celebrating the resilience of the word, and of books and cultural production in the face of destruction, war, “othering” and violence. Each artist and writer expressed in their own unique way their solidarity with the Iraqi people as well as with our shared heritage and communal humanity and grappled with the implications of the bombings and of cultural destruction from their own standing as artists/writers/readers. 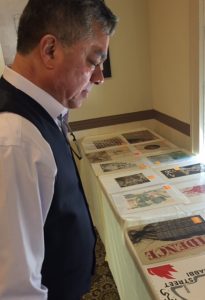 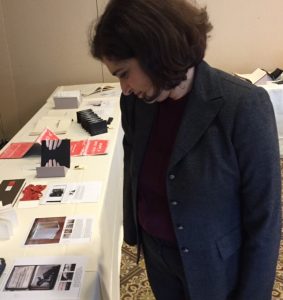 The reaction of the attendees to the exhibit was extremely positive. Viewers were clearly touched by the display, which resonated with many aspects of the lives and values and beliefs of the scholarly community. Stories of inter-cultural, inter-disciplinary, inter-linguistic, inter-geographic, and inter-generational dialogue across difference were shared with us: one Iraqi viewer spoke emotionally about his daughter’s use of art to express her solidarity not just with him as her father, but also with her father’s generation and its long suffering; some viewers were heard offering words to fill out the famous Arabic poems that were incorporated in the broadsides and/or artist books (in their original language or in improvised translation); many expressed a thrill to see the wide geographic range of the participant artists; several asked to take photos and to be given ongoing access to the archive; and many expressed and reinforced the value of this kind of initiative and display for recognition of the trauma of war, invasions and cultural destruction and for addressing the ethical loneliness that besets those who have to face the world alone and whose suffering goes largely unacknowledged. All spoke of the importance of breaking the silence and of resistance to war and destruction through ideas, words and art, and of the importance of bridging divides across differences and reinforcing a sense of our shared culture and humanity. It was a clear example of what artists as well as libraries can do, not only in terms of providing resources for new research to support much needed relevant areas of research in the academy that address the formidable challenges our contemporary world is facing on so many levels, but also with respect to extending a sense of dialogue, of bridges across divides, and of supporting and amplifying under represented voices in the academy, and in the general eco-system of knowledge production and knowledge exchange. 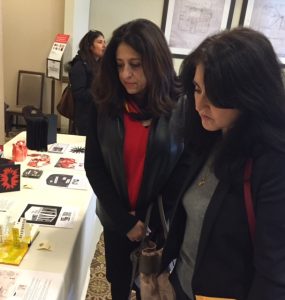 In the words of the project founder Beau Beausoleil, in his call to artists An Inventory of Al-Mutanabbi Street, as quoted by Christine Kermaire: “This project is both a lament and a commemoration of the singular power of words. We ask that the work move within these parameters. We hope the books created will use al-Mutanabbi and its printers, writers, booksellers, and readers, as a touchstone. We hope that these books will make visible the literary bridge that connects us, made of words and images that move back and forth between the readers in Iraq and ourselves. These books will show the commonality of al-Mutanabbi Street with any street, anywhere, that holds a bookstore or cultural institution. And that this attack (part of a long history of attacking the printed word) was an attack on us all. The Al-Mutanabbi Street Coalition is not an anti-war project, nor is it a healing project. The coalition feels that until we truly see what happened on this one winding street of booksellers and readers, on this one day in Baghdad, until we understand all the implications of an attack on the printed word and its writers, printers, booksellers and readers, until we see that this is our street, until then, we cannot truly move forward. Understanding this one day may also help us understand our own role in helping to create the still open wounds that exist on the cultural and literal body of Iraq”.