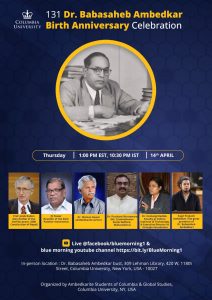 On April 14th, 2022, a number of students and alumni gathered in Lehman library to commemorate the 131st birth anniversary of Dr. B. R. Ambedkar, who is  affectionately known as ‘Babasaheb.’ The birth anniversary of Dr. Ambedkar (abbreviated ‘Bhim Jayanti’) is widely celebrated around the world. Dr. Ambedkar’s ideas and philosophy have long paved the way for global social movements of emancipation. Due to the outbreak of the COVID-19 pandemic over the last two years, an in-person celebration of Bhim Jayanti was not possible: admirers of Dr. Ambedkar around the world marked Bhim Jayanti online by utilizing various social media platforms and innovative modalities. Now that the impact and spread of Covid -19 appears to be waning, this year’s birth anniversary of Dr. Ambedkar was cheerfully celebrated in person, and a Bhim Jayanti celebration was organized on April 14, 2022, under the initiative of Ambedkarite Students of Columbia University and the Global Studies Unit, at the Columbia University Libraries.

For me, and as a student at Columbia, it was a great honor to celebrate Dr. Ambedkar at his alma mater. Dr. Ambedkar obtained his MA in June 1915 at Columbia University, majoring in economics and other subjects such as sociology, history, philosophy, and anthropology. He completed not one, but two masters theses, the second is entitled the National Dividend of India – A Historical and Analytical Study, and was submitted in 1916. On May 9, 1916, also, Dr. Ambedkar presented at Columbia, a paper entitled Castes in India: Their Mechanism, Genesis, and Development. His legacy and deep roots at Columbia are still alive.

The anniversary celebration on April 14th included many speakers who addressed various facets of Dr. Ambedkar’s global thoughts around processes of change, social justice and emancipation, including their current impact and the challenges around them. The distinguished guest speakers of the event included: Prof. Jenik  Radon, the critical 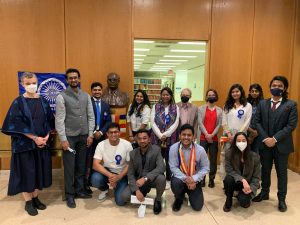 Sudhir Wankhede (Saddhama Prachar Kendra, Maharashtra)
started the program by performing Buddhist prayers (Trisharan and Panshsheel), and the bust of Dr. Ambedkar was garlanded. Vikas Tatad then sung a Sambhaji Bhagat’s folk song ‘Bhimraja re maya bhima’ and shared some thoughts about the significance of the song.

Prof. Jenik Radon then shared his thoughts on Dr. Ambedkar, stating that he fought for the cause of equality, which is reflected in the Indian  constitution. He described Dr. Ambedkar’s remarkable achievement in one word: ‘inspiration.’ “ Dr. Ambedkar is not only India’s legacy; he is also Columbia’s legacy. But he is also woman’s legacy and an inspiration for women, believing that Dr. Ambedkar measured the progress of a community by the degree of progress which women have achieved.”

The co-founder of the Dalit Panthers, novelist J V Pawar, then began his address by remembering Dr. Ambedkar’s great contributions to values of equality and social justice: “Dr. Ambedkar draws the principles of equality, liberty, fraternity, and justice from Buddha,” said Pawar. “Due to these religiously sanctioned discriminatory practices, he attempted to reform Hinduism. As a result, in 1935, he decided to undergo religious conversion. Prior to 1935, many ex-untouchables were converted to other religions, but this had little impact on Hinduism. As an outcome, Dr. Ambedkar decided to conduct mass conversions, and due to the conversion to Buddhism, many Ambedkarites have achieved great success in different fields. Even Buddhist countries are undergoing rapid development.” It was a great pleasure for me to hear Mr. Pawar, whose active involvement in the Dalit movement and production of massive literature in the Dalit literary movement is often an inspiration for students who are systematically marginalized.

Sujat Ambedkar then spoke and urged Dr. Ambedkar’s supporters to try to actively apply his sayings, values, and principles for human rights. Sujat stated, “Indians are capturing many key positions like CEOs, directors, deans, and many other influential posiitons across the globe. This is only possible because of Dr. Ambedkar’s advocacy and hard work to include fair educational policies in the Indian Constitution, as part and parcel of the values of a social welfare state. Whereas Dr. Ambedkar’s work in education has been criticized by many for demonstrating hatred for reservation policies, in Sujat’s view, this was in fact one of Dr. Ambedkar’s most significant contributions to education as a principal architect of the Indian Constitution.

“Education is the responsibility of the state, and the state must ensure free, high-quality, and equal educational opportunities for all castes, regardless of caste, class, creed, race, gender, and religion,” Sujat added. Furthermore, Dr. Waman Gawai, the first doctoral scholar from a small town in the Amravati district, interacted virtually with the students present at the eevnt. Gawai said that Dr. Ambedkar’s ultimate goal was human emancipation. “Emancipation was not restricted to a specific section. The government should provide just and equal opportunities to society’s marginalized and minority groups. Dr. Ambedkar’s intention was for everyone to participate in governance. According to Dr. Ambedkar, self-respect is an essential part of life that should be taught in schools. As a result, education should aid in the development and expansion of mankind’s capabilities.”

Indian Administrative Services (IAS) Prashant Narnaware was one of the Indian speakers who attended the event. Narnaware emphasized Dr. Ambedkar ‘s great scholarship, and his inspiration to many people from the depressed class who are rising through the ranks in every sector, including politics, bureaucracy, the judiciary, business, and many others, as a result of his unwavering efforts. “The thoughts of Dr. Ambedkar are the only solution to overcome the social disabilities we face,” Narnaware stated. The agenda on which we must all work is ‘Educate, Agitate, and Unite.’ Moral values such as equality, liberty, fraternity, tolerance, unity, and justice must underpin modern society. As Dr. Ambedkar’s supporters, we simply make his dreams a reality. Every year, the anniversary of his birth reminds us of our enormous social responsibility.” On Dr. Ambedkar’s birth anniversary, he delivered a powerful message. He discussed various aspects of Dr. Ambedkar’s life and urged Ambedkarites to carry on his legacy of strengthening society by cultivating the seeds of moral values.

“Dr. Ambedkar is the source for understanding India’s true history.  We attempt to comprehend him through his writings, speeches, and other works of literature. We have been listening to songs about Dr. Ambedkar since we were children. He is a role model not only for Indians but also for those who have fought for the cause all over the world. Educated youth from India are leaving for higher education and jobs, spreading a message to the rest of the world. “If they see any discrimination, they raise their voices,” Dr. Kadlak said in her speech. “As per Hindu texts, crossing a sea and going for higher education was considered a sin because of these religious and socio-cultural norms. Dr. Ambedkar, on the other hand, went to the United States and England for his higher education, and it is because of him that we have begun to consider pursuing education from abroad. It aids in the development of a global perspective,” she continues. Dr. Kadlak from India reminded us of the cultural practices and celebration of Bhim Jayanti in India, as well as how it has helped us understand Dr. Ambedkar since childhood. For Dr. Kadlak, Dr. Ambedkar is the source for unraveling Indian history and providing a critical lens to fight against any discrimination inflicted on marginalized sections of society anywhere in the world. 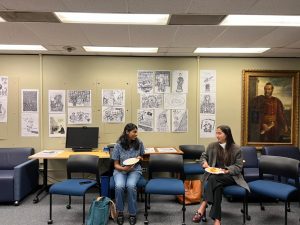 Vipin Tatad’s Jai Bhim Kadak – 2 Rap was released live during the event in the second part of the virtual and in-person session. He is a young rapper from Amravati, India, and he was the event’s one-of-a-kind attraction. Another highlight of the event was a painting exhibition set up at the venue by Dr. Sunil Abhiman Awachar (University of Mumbai). The show was presented by Nayan Meshram and Surbhi Dahivalkar. The Indian Constitution’s preamble was read at the end of the event. Gary Hausman (Librarian for South Asian Studies) and Pamela Graham, Director, Humanities & Global Studies, Columbia University, New York, USA, have provided special support for the event.

4 thoughts on “Bhim Jayanti Celebration at Columbia University: A Tribute to a Champion Who Fought for Social Justice”