The Libraries Digital Program Division and the Digital Humanities Center are collaborating with Dr. Pamela Smith (Columbia’s Seth Low Professor of History & Director of the Center for Science & Society) on the Making and Knowing Project, which was launched by Dr. Smith in 2014 as the flagship research initiative of Columbia’s Center for Science & Society. The project involves working with a sixteenth century French manuscript held by the Bibliothèque National, BnF MS. Fr. 640, a so-called “book of secrets” that contains recipes and instructions for creating a dizzying variety of crafts, metalwork items, casts, and other material objects. It builds on Dr. Smith’s work on the connections between the early modern craft workshop and the scientific laboratory, expanding the model of material reconstruction and textual analysis that she has been doing with the manuscript. The manuscript is being used as the focal point for innovative pedagogical approaches that offer students and researchers the opportunity to experience the history of science in an immersive way in a lab setting and to learn about translation, experimentation, materials science, language, deep data, technology, and artisanship. The Lab Seminar taught each year combines historical research and materials science, and gives students hands-on experience with the recipes and materials referenced in the manuscript. Each summer, a paleography workshop is held that gives advanced graduate students an opportunity to transcribe and translate the Middle French manuscript collaboratively. This interdisciplinary project connects natural scientists, scholars from across the humanities, and conservators, and offers students a unique opportunity to explore the challenges of hands on lab work and scientific experimentation, the importance of paleography, and the power of collaboration for building understanding and producing knowledge.

The online critical edition, which will include visual annotations, electronic field notes, images, commentaries, and video from the lab work, as well as support for the transcription and translation process, is being developed with the assistance of the Columbia University Libraries Digital Program Division (LDPD) and the Digital Humanities Center. Terry Catapano, a digitization and metadata expert in LDPD, has been working closely with Dr. Smith on the project. His work has been centered around identifying and providing appropriate technologies for the online critical edition, and directing the application of XML markup using Text Encoding Initiative (TEI) Guidelines for tagging cultural heritage content. Along with the translation, two transcriptions are being developed, a “diplomatic” transcription that is a literal representation of how the text appears on the page in the original and a normalized transcription in which abbreviations are expanded, readings are provided for hard to discern words, and deletions are removed. The markup of the translation and transcriptions is being done to identify the structural and textual units of interest, e.g., page breaks, recipe text, main text, and marginal notes. Tagging is also being used to identify features of interest in the manuscript, including the materials discussed, animals, places and place names, professions, and other identifiable objects. Students learn the middle French script, create transcriptions by deciphering the text, and then add XML tags in Google Docs, which although it provides a poor interface for text encoding markup, is nonetheless effective in enabling collaborative engagement with the transcription by students and members of the team. The next stage of the text encoding process will be to align the markup from the two previous paleography workshops (in 2014 and 2015), where the markup schemes differed to some extent. Once the collaborative features of Google Docs are no longer as crucial, the transcription will be moved into a more formal XML structure directly using TEI guidelines.

Terry is also collaborating on defining the specifications for the features of the online critical edition of the manuscript. This work is being done using open tools and standards (e.g., XML, HTML, CSS, etc.) and the text encoded in Unicode/UTF-8 to facilitate the long-term viability and reusability of the electronic edition. Using open source technologies liberates the text from the restrictions of formats such as MS Word or Adobe PDF, and also enables semantic markup that can, for example, define text segments and convey what each segment is about. A string of text can be described as a paragraph, a name, or a recipe, and that same string can also be identified as referring to an animal, a place, or a profession. This semantic markup then facilitates more analytical searching by researchers, allowing, for instance, a search that shows all references to an animal, e.g., lizards, in recipes having to do with metalworking. The related material, including textual commentary and the reconstruction of the recipes, will also be available to shed light on the text. The online edition will support various views of the text and allow researchers to view the translation and the transcriptions side by side.

Terry has been working with the project since 2014. He developed the initial ad hoc markup tag set that was used initially and then instructed 2015 Paleography Workshop students in applying the corresponding standard XML and TEI markup. He will be responsible for creating the final markup to be used for the project and establishing the schema for the transcription, which establishes a structure for the tags and identifies where they belong and in what order. Encoded according to the rules expressed by the schema, the text can be readily rendered in multiple ways. This allows, for example, the identification of where original text pages begin and where sections, divisions and paragraphs begin and end. The schema and tags work together to display the data logically and to support analytically-oriented semantic search. Terry will be co-instructing the June 2016 Workshop, which will combine paleography, TEI, and data visualization. He will instruct students on how to do the TEI markup and how to then use it for data visualization.

The Making and Knowing Project gives students and researchers from a variety of disciplines the opportunity to experience the potential of the digital humanities firsthand. The expertise that Terry Catapano of LDPD and Alex Gil of the Digital Humanities Center provide to support this unique digital humanities research and lab work enriches both the project and the Libraries. There will undoubtedly be more to learn from this multi-dimensional, interdisciplinary project. 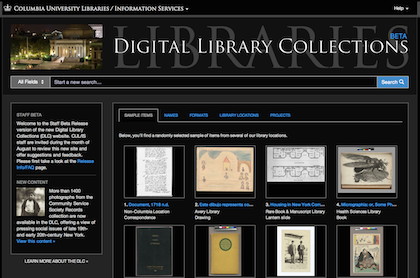