Columbia’s Preservation Reformatting Department (PRD) began as a reprographic services unit back in the 1930s. In the 1970s-1980s, the department gradually became a reprogaphy unit with an emphasis on the preservation of brittle and deteriorating materials.

While the Preservation Division was taking shape, the world was just beginning to understand the slow moving disaster headed our way: the acids within wood pulp paper, which would eventually consume our books and documents. A number of studies done as early as the 1930s had found that an overwhelming percentage of research collections were printed on acidic paper which, under less than pristine conditions, would eventually become embrittled, ensuring the eventual destruction of more than a century of scholarly works.

In an attempt to cope with this looming catastrophe, the National Endowment for the Humanities (NEH) issued a number of grants to research libraries throughout the U.S., including CUL. These funds, along with emerging best practices established by the Research Library Group (RLG), provided us with the means of moving nascent reformatting projects into large scale reformatting programs, which endure to this day, albeit in a much evolved form.

As of 2016, PRD has transformed itself in many ways; a reflection of the revolutionary technological changes happening outside and within the library doors. We continue to prioritize materials in demand but have expanded our capacity. You may be surprised to hear that we still do send out shipments of microfilm for brittle, circulating collections, primarily due to copyright restrictions. We also still create preservation photocopies for materials for which we really need physical copies on the shelves, such as music scores and reference materials.

In addition, we have a fully developed program for ebook creation for public domain materials and PRD staff is responsible for every step of this process, as they have been for many years with microfilming and photocopying. The staff collates items, searches for existing copies, creates copy catalogued records for the new formats, sends and receives vendor reformatted materials, and is responsible for all QC, image processing and uploading and organizing on Internet Archive. 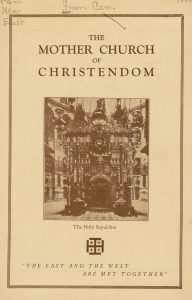 A pamphlet from the Missionary Research Library (Burke Library)

A future blog post will explore this process and some of the customizations and enhancements that PRD has come up with over the years.

Finally, we are also responsible for the front end of patron services and for numerous special projects, such as the Columbia Spectator digitization project and Burke’s Missionary Research Library digitization, images of which are included in this post.