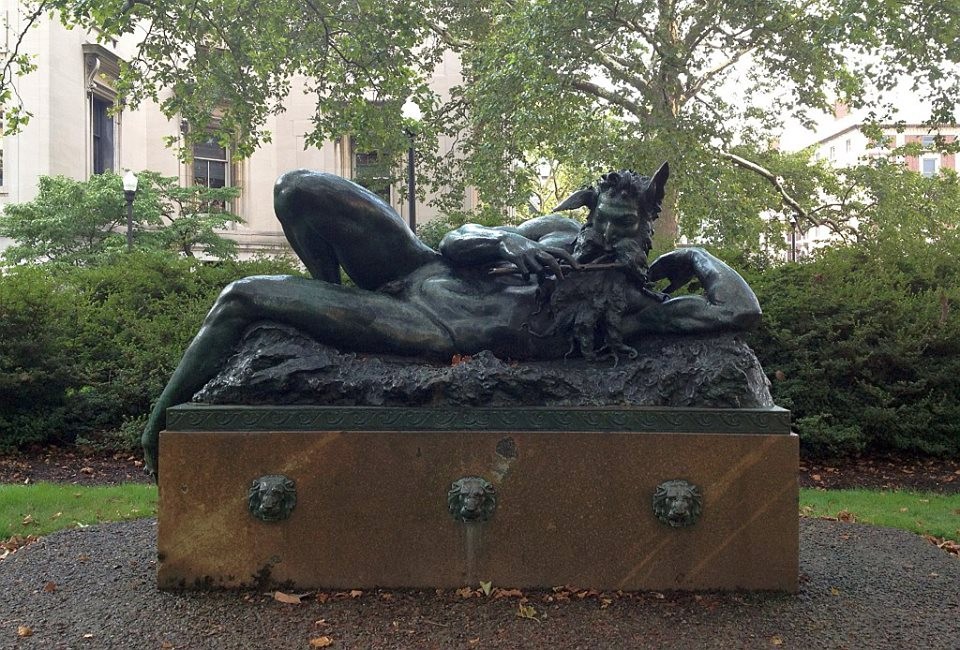 If you think you've seen this sculpture before but you're not sure where, then you've walked the grounds of Columbia's Morningside Heights campus.

This public outdoor sculpture is The Great God Pan (C00.825) by the American artist George Grey Barnard (1863-1938). The work shows the Greek god Pan in his usual form as half-man, half-goat, playing the pan pipes associated with him. As a fertility deity, he is often accompanied by fauns and nymphs, but here he is seen in solitude enjoying the music he plays. This sculpture was one of Barnard's first commissions upon returning from his artistic training in Paris. The Clark family commissioned the work from him in the mid-1890s for the Dakota apartment building on 72nd St. and Central Park West. The sculpture was cast in bronze by Henry-Bonnard Bronze Co., an important foundry located in New York. However, when completed, the sculpture was considered inappropriate for the Dakota, possibly because of the figure's uninhibited nudity. The sculpture was offered to the City of New York and briefly destined for Central Park, but eventually Edward Severin Clark donated it to Columbia for its newly developed Morningside campus.

In 1907 the architect Charles Follen McKim installed the sculpture as a working fountain in a neo-Pompeiian grotto in the northeast corner of campus. Over time it was moved as new construction took place on campus, and currently it is located on the lawn facing Lewisohn Hall.

Barnard's career as a sculptor continued, but he became more famous for his collection of medieval architectural fragments and sculptures, which eventually became the foundation for The Cloisters Museum & Gardens at The Metropolitan Museum of Art.