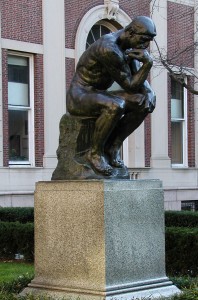 Among all the public outdoor sculptures on campus, the one probably most familiar to people is The Thinker (Le Penseur) by the French sculptor Auguste Rodin (1840-1917). Situated on the lawn outside Philosophy Hall, The Thinker is six feet tall without his base, which adds nearly another six feet to its overall height.

Rodin began his career in the mid-1870s, following the end of the Franco-Prussian War, a period in which numerous monumental sculptures began to appear throughout Paris as a form of patriotism to the newly-established Third Republic government. His Parisian artist contemporaries included the Impressionist painters Claude Monet and Edgar Degas. Although Rodin’s sculptures are figurative in nature and arguably an adaptation of classical forms, art historians see them as the beginning of a modernist sensibility toward abstraction in sculpture because of their stark hyper-realism and fragmentation of the body. The Thinker was originally designed in 1880-82 as the central figure at the top of his monumental set of doors, The Gates of Hell. The seated male nude was meant to represent Dante contemplating his journey into Hell as recounted in his epic poem The Inferno. The commission for the doors never came to fruition, and so Rodin began marketing individual sculptures from the portal as art objects unto themselves. He cast the first life-sized versions of The Thinker in 1903.

After Rodin’s death, his studio continued to produce bronze casts in his name using the sculptor’s original models. Columbia’s replica of The Thinker was commissioned in 1930 by then-President Nicholas Murray Butler from the Musée Rodin, and it was cast in bronze by Alexis Rudier, Rodin’s preferred foundry. The sculpture as it sits on the lawn outside Philosophy Hall has come to symbolize wisdom and knowledge, the importance of the thought process needed to excel in one’s academic studies.

One thought on “Auguste Rodin and The Thinker”