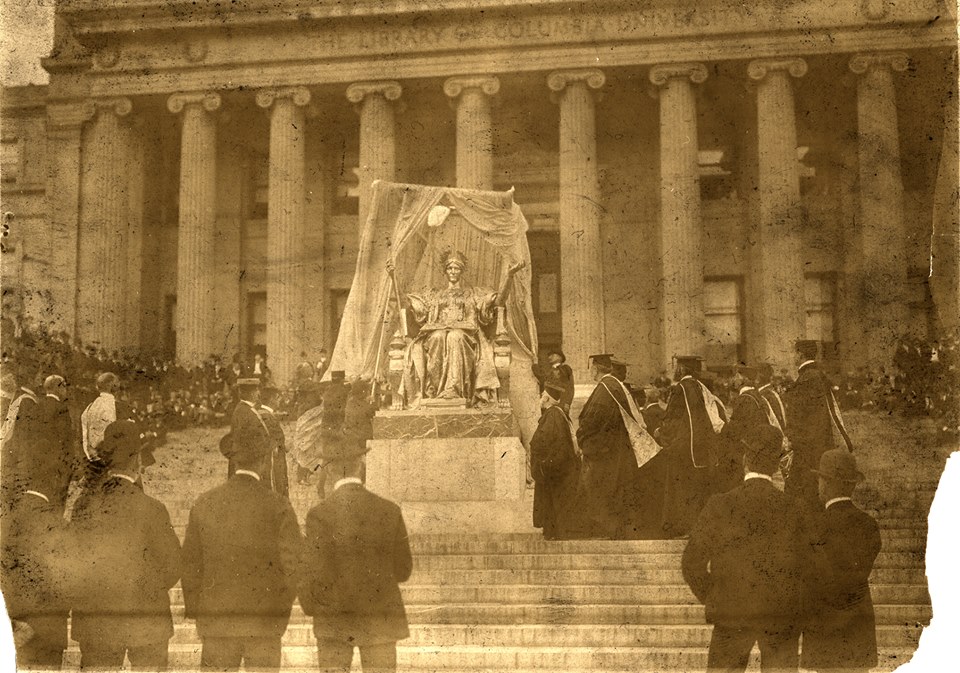 Thanks to the ongoing release of digital images from University Archives, we are able to visually relive great moments from Columbia’s past. For instance, the image you see here shows the unveiling of the sculpture Alma Mater, which was designed by Daniel Chester French and cast in bronze by John Williams. From the time of its installation, this sculpture has been a symbol of academic pride for Columbia University.

The Trustees approved French’s design for the statue in Spring 1901, and it was scheduled to be unveiled at Commencement in June 1903. However, a strike at the Williams foundry delayed completion of the statue. It was therefore officially unveiled in the late afternoon hours on September 23, 1903, following the opening exercises for the 150th academic year, which took place that same day at 3:00 PM. At the unveiling, an introductory prayer was offered by Henry Codman Potter, University Trustee and Bishop of New York. The statue was then formally presented to President Nicholas Murray Butler by John Howard Van Amringe, Dean of Columbia College, on behalf of the donors.

Alma Mater was a gift in honor of Robert Goelet of the Class of 1860 from his wife and his son, Robert Walton Goelet. What may not be immediately obvious in the image seen here is that the bronze sculpture was initially gilded and thus glowed like a gold beacon in the sunlight. As taste in sculpture changed, French returned at a later date and removed the gilding, giving the statue the brown lustre it has to this day.

For more information about the unveiling of Alma Mater, see the front page of the Columbia Daily Spectator for September 23, 1903, available online through the Columbia Spectator Archive project.