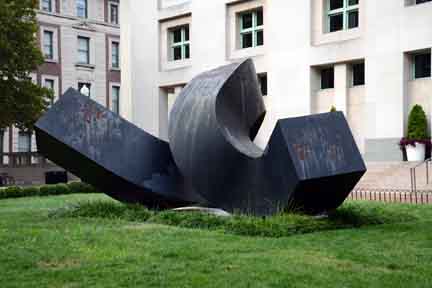 Conservation day has arrived! The Curl by Clement Meadmore, the large sculpture installed outside Uris Hall, is about to undergo a major conservation project. Those following the Public Outdoor Sculpture at Columbia blog may recall our previous posts about this work, including a video about its history and deteriorating condition over decades of exposure to NYC environmental conditions. In both of those posts we noted that a task force was exploring conservation options for this sculpture, and those plans are now in place.

Among the more significant works of public outdoor sculpture on the Morningside Campus, the Curl by Clement Meadmore (1929-2005) was commissioned by Percy Uris (1899-1971), businessman and benefactor of the Columbia Business School. Meadmore received his training as a sculptor in Australia, and in the 1960s emigrated to the United States where he was influenced by Abstract Expressionism, Minimalism, and the improvisational sounds of jazz. Curl was the artist’s first commission for a large-scale public monument and in 1968 it was installed on the lawn of the new Business School building, which Uris had endowed. This sculpture made Meadmore’s international reputation, and he went on to receive numerous other commissions for public outdoor sculptures from universities, corporations, and cities around the world.

Meadmore began experimenting with Cor-Ten steel, at that time a new product, and he developed his signature fluid-like geometric sculptures that belie the industrial materiality of the metal from which they are made. The inherent nature of Cor-Ten steel is that it rusts, and in the oeuvre of artists such as Richard Serra this rust effect is seen as part of the sculpture’s aesthetic. Meadmore’s interest in painting his steel structures, however, gave them a more pure and streamlined appearance. Unfortunately, over time, the degradation of the paint in combination with the oxidating steel resulted in a number of structural issues. When the Curl conservation project is completed, the revitalized sculpture’s fissures and gaps will be repaired, the rust will have been removed, and a fresh uniform coat of paint will restore the beauty of this work similar to its origins as Meadmore intended.

Acknowledgments are due to everyone who has worked on bringing this project forward, including the Office of the Provost, the Meadmore conservation task force, the Columbia Business School, Columbia Facilities, and the Columbia University Libraries.