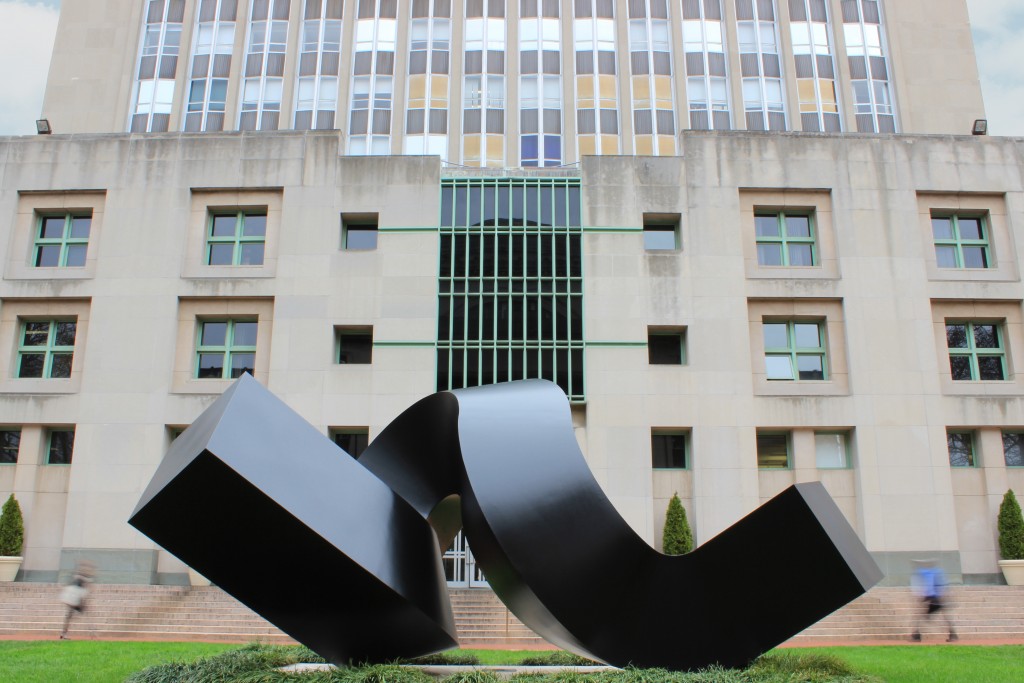 Anyone walking past Uris Hall these days will now notice that Clement Meadmore’s sculpture The Curl is looking better than ever, or at least better than it has for the past 15+ years. Seeing it in its newly-conserved state, the viewer can appreciate fully Meadmore’s intent of using the painted surface of the sculpture to create a sleek, sinuous form that belies the weight and hard materiality of its Cor-Ten structure. Although rust is a natural part of the appeal of Cor-Ten steel, environmental conditions led to the erosion of the steel in some parts and an adverse reaction with the paint. After nearly three months of conservation work spearheaded by Conservation Solutions, Inc.–to whom we owe our thanks for all their hard work–we are now pleased to showcase Meadmore’s masterpiece in its newly-conserved state. Upon seeing the sculpture, Ellen Goldberg, Trustee of the Meadmore Foundation, recently responded with exuberance that “Clem” would be thrilled with the results.

In September, The Curl was dismantled and removed from the campus, then traveled to Virginia, where in a warehouse layers of old paint were removed and the entire sculpture pressure-cleaned to remove all the rust. Areas of degradation and fissures in the surface were repaired with new steel. The entire sculpture was then sprayed with a zinc coating to strengthen its resistance to natural degradation, then sanded to create an even surface, but respecting the original surface conditions from when the sculpture was first made. Once the sculpture returned to campus, it was housed in a tent so the final coats of paint could be rolled on, as they would have been applied in Meadmore’s day. Only when the sculpture was fully dry and cured was the tent removed to reveal the sculpture in its revitalized form. To see more photos of the return of the sculpture to campus, go to the Avery Library blog, https://blogs.cul.columbia.edu/avery/2015/12/22/the-curl-is-back/.

A brief rededication ceremony was held on December 16, 2015, to celebrate the beauty of this sculpture and its importance to Columbia, and to acknowledge all of Columbia’s partners for their critical roles in bringing this project to fruition: Office of the Provost, Columbia Business School, Columbia University Facilities, Columbia University Libraries, the Meadmore Task Force and the Committee on Art Properties.

To see the latest video produced by Columbia’s Office of Communications about The Curl, including historical footage and highlights from the recent rededication ceremony, go to https://vimeo.com/columbiauniversity/review/149888572/2bfc55c0a5.

As with all the public outdoor sculpture, we kindly remind everyone to please respect these sculptures by not climbing on them or abusing or vandalizing them in any way. By doing this, you are helping to ensure the long-term preservation of these important art works for generations to come. Thank you.