The following post was written by Juan Alvarez, a student in the “Public Outdoor Sculpture at Columbia and Barnard” undergraduate seminar in Spring 2017. This excerpt from his research paper discusses Columbia’s famous lion mascot and the sculpture of the lion near the entrance to the Dodge Fitness Center, installed on campus in 2004. 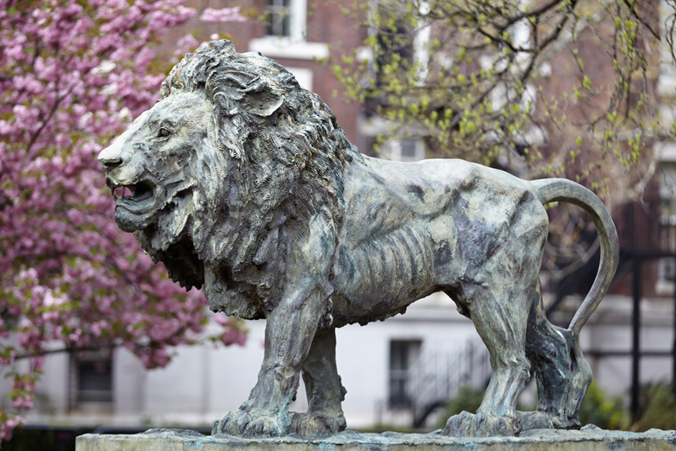 Columbia’s sculpture of the Scholars’ Lion by Greg Wyatt stands on a large granite pedestal and faces East. It is a larger-than-life walking lion made in bronze. With his eyes wide open, the lion is patrolling his territory. The so-called “King of the Jungle” walks on massive, even oversized, paws that demonstrate its potential for violence while maintaining a focused and calm demeanor. His mouth is open, exposing razor-sharp canines to warn those who would threaten him. Yet, there is a grace to the figure, and a feeling of awe may overcome the viewer after just a few moments of contemplating this sculpture of Columbia’s mascot.

From the cave paintings in Chauvet, France to the lion hunt reliefs of Assyrian king Ashurnasipal II, man has been obsessed with the image of this animal to express power, strength, virility, and divine right. The decision to make the lion the mascot for Columbia may seem obvious, and if asked the majority of students might assume it was adopted at the time of the school’s founding in 1754. The truth is that Columbia had no mascot until April 1910, when the Columbia Alumni Association voted and finally passed a motion making the lion the official mascot.[1] At the same event, a banner in blue and white with a rampant lion was presented to Pres. Nicholas Murray Butler by George Brokaw Compton (CC’09 and Law ’13). But the rampant lion was not popular with all students and the new mascot had its challengers. Runner up for the prestigious position was a feral goat that roamed the campus grounds and was named “Matilda the Harlem Goat.” In a letter to the editor of Columbia Alumni News, an anonymous writer argued for the goat, saying that it called Morningside its home just like the University.[2] Others were not so much opposed to the lion but rather the connection of the rampant lion to the British royal family. They wanted instead a symbol that was more in line with America, like the eagle.[3] 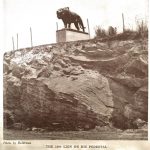 By 1924, however, the lion was firmly in place as the mascot for the school when the Class of 1899 took on the task of making the lion’s presence official for their 25th reunion (and Columbia’s 170th anniversary) by presenting a bronze lion to the University to be placed on a rocky outcropping at Baker Field, overlooking the football practice field. American animalier sculptor Frederick Roth was commissioned to sculpt the lion and McKim, Meade & White the pedestal.[4]  Roth was selected because of his artistic credentials, including being the president of the National Sculpture Society and the sculptor of the Princeton Tiger.[5] On June 4, 1924 the Columbia Lion was presented with great fanfare by Pres. Butler, standing on its rocky outcropping.[6] It was later moved to ground-level at Baker Field where it stands today.

Eighty years later, the sculptor Greg Wyatt brought the Scholars’ Lion to Columbia. Wyatt attended Columbia College like his father, Stanley Wyatt (CC’43 and GSAS’47), and graduated with a major in Art History in 1971.[7] The elder Wyatt was a member of the faculty teaching fine arts.[8] The younger Wyatt currently is sculptor-in-residence at the Cathedral of St. John the Devine, where his most famous public outdoor sculpture, Peace Fountain, can be seen. The sculptor was commissioned by the Class of 1996 to create a bronze lion for the Morningside campus, with additional funds provided by the Classes of ’71 and ’95.[9] One member of the committee wrote:

For far too long, Columbia students have had to sustain the lion’s spirit in their hearts without the inspiration of a tangible image on campus. Now that roaring gap is being redressed. Greg’s work will no doubt provide a new, mane focus for campus life. We may longer be King’s College, but we can still celebrate the “King of the Jungle.”[10]

Wyatt produced multiple sketches and at least two models, the first versions of which were described as being too anthropomorphic and lacking in ferocity. Wyatt responded with more drawings and worked the models tirelessly, finally settling on the depiction seen today, with the lion walking and his mouth open, exposing his teeth.[11] The original site for the sculpture was supposed to be outside John Jay Hall, but University Administration decided instead that the sculpture should mark the entrance to the Dodge Fitness Center because of the mascot’s ties to athletics. On April 7, 2004, Scholars’ Lion was unveiled in a public ceremony that coincided with Columbia’s 250th anniversary.[12]