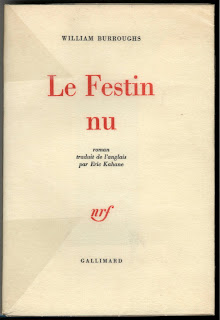 In 1964 the French publisher Gallimard brought out the first French translation of William S. Burroughs’s Naked Lunch under the title Le Festin Nu. Ironically, the book first appeared in Paris in its original English form in 1959, in the Olympia Press Traveller’s Companion series (see RBML‘s copy here). France traditionally had been a friendly place for many controversial English language writers of the twentieth century: James Joyce (Ulysses, 1922), Henry Miller (Tropic of Cancer, 1934), and Vladimir Nabokov (Lolita, 1959) all published books that were either banned or considered unprintable in Great Britain or the United States.

In recognition of the French contribution to English language letters, and in the interest of fully documenting Naked Lunch‘s reception and the history of its publication, RBML recently acquired this copy of Le Festin Nu, copy number 1196 of 3,750 copies printed on vélin bouffant des papeteries de Téka. The text was translated by Eric Kahane, the brother of Olympia Press publisher Maurice Girodias (Kahane also translated Nabokov’s Loilta into French in 1959). 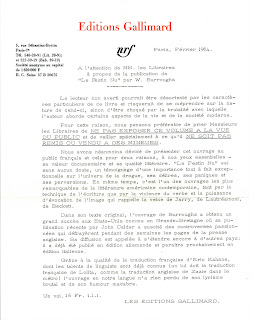 What’s curious is the letter to booksellers that Gallimard issued with the book, an example of which is included in the RBML copy, seen to the right.

For those who do not follow the French, the publisher warns booksellers that unsuspecting readers might be disoriented by the book’s particular characters and risk shocking misunderstandings over the sometimes brutal descriptions made by the author on certain aspects of modern society. Booksellers are further advised not to expose the book to public view and under no circumstances to sell the book to minors. One might ask, is this conservationism necessary in a country with a such a strong track record for literary tolerance? About a year before Le Festin Nu appeared in France, a Boston bookseller was arrested in January 1963, and charged with obscenity for selling the first American edition of Naked Lunch (Grove Press, 1962)–the book would not be cleared of that charge until July 1966, so perhaps Gallimard’s caution over this particular text was warranted. Also, the fact that the controversial text was printed in French made the brutalité of the text more accessible to Gallimard’s French readers. The author of this blog entry was able to find no recorded cases of casualties among French readers after indulging in Le Festin Nu. Gallimard continues to publish the book today .