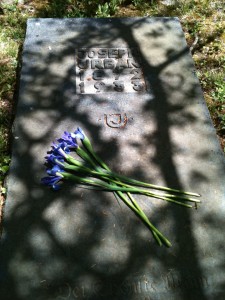 Taking advantage of the fine spring weather last week, I visited Sleepy Hollow Cemetery to find the grave of Joseph Urban. While he is not as well remembered today as many others who are buried there, he is listed on the cemetery’s published map of important grave sites.

Located in Section 48, in the quieter north-western side of the cemetery overlooking the Pocantico River, Urban’s grave consists of a large black granite slab inscribed with his name, his dates, his JU monogram, and the following inscription in fraktur letterforms from his beloved song: “Der Schönste Mann von Wien.”

Buried very nearby to the right, in a small grove of mountain laurel with no marker, is Urban’s colleague, architect Raymond Hood (1881-1934) who attended Urban’s funeral service in the Sleepy Hollow Chapel.

Urban’s daughter Gretl sent a telegram to the Bodanzkys, then in Vienna, on July 10, 1933 with the news of her father’s death, and the conductor sent back the following message: “A bright light has gone out for many, many of us because he was greatly admired and much loved, and we shall weep.”

The graves of many others whose papers are held by the Rare Book and Manuscript Library can be found in the Sleepy Hollow Cemetery, including those of Andrew Carnegie, Mary and Albert Lasker, and Oswald Garrison Villard. Frederick Philipse is represented in RBML by some early records of the Philipse Family. Raymond Hood’s papers are held by the Avery Architectural and Fine Arts Library.