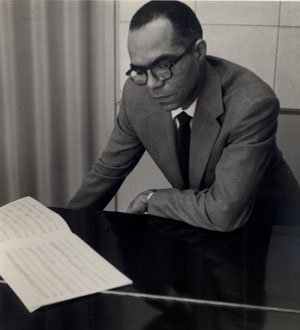 It is a salute to the completion of Columbia University Libraries, Rare Books & Manuscript Library s work archiving, as Jennifer Lee, Curator for Performing Arts noted, “a treasure trove of material relating to all aspects of the composer’s work, from manuscript sketches to finished scores, including correspondence, photographs, programs, and his professional files.”

Michael Ryan, Head of Columbia’s Rare Books & Manuscript Library, at the time the Columbia received these works, commented, that Kay was “[a] prolific and important composer of contemporary symphonic, chamber, and choral music, Kay also wrote five operas, the most substantial and last of which, Jubilee (1976) and Frederick Douglass (1991), were based on themes from African-American history.” Ryan also noted that, “Kay was a formidable and versatile composer.”  It is amazing that we are approaching the 70th Anniversary of the New York Philharmonic premiere of Ulysses Kay’s first major work Of New Horizons: Overture at what was then West Harlem’s stunning Lewisohn Stadium which is now the site of City College of New York’s North Academic building.

Kay’s connection with Columbia goes back to 1946 when he was awarded the Alice M. Ditson Fellowship in Composition and studied with Otto Leunig.  He also was the winner of the BMI Prize for his work Suite for Orchestra, which Dean Dixon and the American Youth Orchestra premiered in 1945 and A Short Overture, which received the George Gershwin Memorial Award in 1946.

The Rare Book & Manuscript Library (RBML) is Columbia’s principal repository for primary source collections.  The range of collections in RBML span more than 4,000 years and comprise rare printed works, cylinder seals, cuneiform tablets, papyri, and Coptic ostraca; medieval and renaissance manuscripts; as well as art and realia.  Some 500,000 printed books and 14 miles of manuscripts, personal papers, and records form the core of the RBML holdings.  One can find literary manuscripts from the 14th century to the papers of authors Herman Wouk and Erica Jong.  Archives as varied as the Carnegie Endowment for International Peace, Random House, NGOs such as Human Rights Watch and Amnesty International-USA, and the archives of Columbia University are available for research.  The history of printing, graphic arts and the performing arts are strengths of RBML.