In 1990, Ben Duncan and Dick Chapman donated a collection of papers to the Rare Book and Manuscript Library. It was small—just a few boxes of correspondence, literary manuscripts, and publications. Duncan and Chapman nevertheless asked that it be closed to researchers until both of their deaths. What great secret was contained therein?

RBML’s collection summary for the Ben Duncan Papers, circa 1997, concealed nearly as much about the collection as it revealed.

Not many more years passed before Duncan and Chapman spilled the beans themselves. They were a couple, and had been for decades. The story of Ben Duncan, Dick Chapman, and their papers illustrates the ways that gay men living on both sides of the Atlantic formed communities, found love, and told their stories as they navigated the dramatic social and political changes of the second half of the twentieth century.

Dick Chapman visited the famous Greenwich Village Bohemian hangout San Remo Café in January 1957, which he called “95%” a gay bar. (This letter was written more than twelve years before the Stonewall riots.)

Ben Duncan and Dick Chapman met at Oxford University on New Year’s Eve, 1951. A mutual friend had set them up on a blind date. Several months later, overlooking Christ Church meadow at sunset, Ben proposed that they spend the rest of their lives together.

Ben Duncan was an orphan who had spent most of his childhood in group foster homes in Alabama. Dick was Ben’s only family, as they both understood. Ben Duncan to Dick Chapman, February 7, 1957.

In the 2005 edition of his memoir, The Same Language, Ben wrote, “We made the decision in the way we would continue to make so many of them in the future. I dream up some outlandishly unlikely plan, in the teeth of reality. Dick explains that it is quite impossible. Then, somehow, we do it.” Ben was an American who had just completed his degree at Oxford, had no job, and thus had no legally compelling reason to remain in England. Dick still had a year left at Oxford. The immigration benefits associated with marriage were as inaccessible to the two of them as the moon. 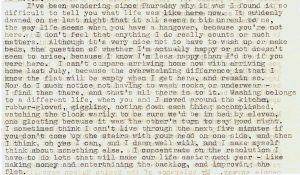 While Dick Chapman worked in New York City, Ben Duncan stayed in the London flat he and Dick had shared. He wrote eloquently to Dick about how it felt to stay behind, in this excerpt from February 10, 1957.

Nevertheless, the longest separation Ben and Dick would ever endure was from October 1956 to October 1957, when Dick’s advertising career took him to New York for a year. The letters they wrote to each other, almost daily, form the heart of the Ben Duncan and Dick Chapman Papers.

Four months into his year in the States, Dick Chapman found himself “spell[ing] American.” Dick Chapman to Ben Duncan, February 10, 1957.

Duncan and Chapman kept their letters in a sealed box until 1989. That year, they met Kenneth A. Lohf, who was then Librarian for Rare Books and Manuscripts at Columbia University. A mutual friend, the book collector and Columbia alumnus Dallas Pratt, arranged the meeting in London. In addition to sharing Duncan and Chapman’s love of English literature, Lohf had also lived with his long-term partner, Paul Palmer, for nearly forty years. Perhaps this was why Duncan and Chapman felt comfortable offering their letters to Columbia University. Lohf suggested that they include Duncan’s literary manuscripts as well.

Lohf’s firsthand understanding of the ways that romantic relationships between men could be hidden in plain sight doubtless influenced the way in which the Ben Duncan Papers were originally processed in 1990-1991. Calling the collection the Ben Duncan and Dick Chapman Papers might have been too obvious, but the addition of Duncan’s manuscripts allowed it to be presented as Duncan’s papers alone. Thus the collection’s original name: the Ben Duncan Papers. The collection’s original summary likewise hinted at the importance of the letters without giving anything away. The archivist wrote, “The correspondence consists chiefly of letters between Duncan and Richard Chapman, during 1956 and 1957, when Duncan, an American, was working in advertising in England, and Chapman, an Englishman, was working in advertising in New York. These letters provide a perspective on daily life during the mid-1950s, including such topics as books, plays, current events, and customs of that period.”

In commenting on a mutual friend’s romantic woes, Ben Duncan also provides a glimpse into the ways gay men carefully identified each other in mixed settings, as well as the necessity of conforming to masculine gender norms in order to avoid being “obvious.” Ben Duncan to Dick Chapman, February 7, 1957.

The idea of closing the collection to researchers during both donors’ lifetimes was also Lohf’s.

Lohf retired in 1993. By the time of his death, in 2002, the pace of change had picked up. Duncan began working to revise his 1962 memoir to include details of his life and relationship with Dick that would have been unprintable at the time—five years before homosexuality was decriminalized in England. He and his editor, John Howard, revisited the 1956-1957 letters as they prepared the manuscript. 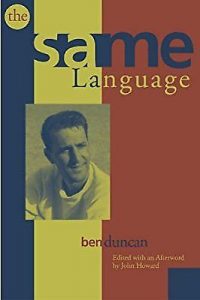 Duncan gave another handful of manuscripts, including an as-yet unpublished sequel to The Same Language, titled Late Starter, to the Rare Book and Manuscript Library in 2003. He did not, however, alter the restrictions on the collection.

Duncan and Chapman were not ashamed of their relationship, and, as Duncan wrote to Lohf in 1989, “there is nothing in any way scandalous or sensational” in the letters. In his revision of The Same Language, Duncan identified himself explicitly as a gay man, and described frankly the way that aspect of his identity shaped his experiences. I think he and Chapman simply preferred to live quietly, as they had done for fifty years.

Ben Duncan and Dick Chapman became the first couple in Cambridgeshire to form a civil partnership, when the Civil Partnerships Act came into effect in 2005. By that time, they had become icons in Cambridge’s gay community. Duncan was keenly aware how important their example was to younger generations of LGBTQ youth. “They wanted to hear, for a change, a story with a happy ending for people like them and us,” he wrote.

They finished their life together as a married couple when Chapman died in 2012. Duncan died four years later, in 2016. Now that the terms of the donor agreement have been fulfilled, their papers are open to researchers in the Rare Book and Manuscript Library.

Much as Duncan and Chapman revised the way they presented themselves to the world, I have also revised the collection’s description. Recognizing the donors’ original understanding of the collection’s historical significance (and the name they continued to use for it in correspondence with the Rare Book and Manuscript Library) I renamed the collection the Ben Duncan and Dick Chapman Papers. I updated the biographical note to include information about both of its donors, and to make their relationship to one another clear. I also updated the scope and content information to highlight the letters’ value to scholars interested in LBGTQ history. In short, the collection came out of the closet. (Though it is, like all archival collections at the Rare Book and Manuscript Library, still stored in closed stacks.)

When the revised edition of The Same Language was published, Ben told a reporter for The Guardian, “It was an absolute joy to write. I can’t tell you the sense of release. I wanted our lives put on record. I didn’t want the moment to pass and be forgotten. I didn’t want the bad things that happened to us to happen to anyone else.” I hope he would feel similarly about the opening of the Ben Duncan and Dick Chapman Papers. — Celeste Brewer, Processing Archivist