Most of the time, when people at Columbia talk about the DeWitt Clinton chair, they mean the professorial chair in American History currently held by Eric Foner.  At the Rare Book Manuscript Library, however, we mean a literal chair on display in the Corliss Lamont reading room.  As its tarnished silver plaque notes, this is the chair “in which GOV. DE WITT CLINTON was seated at the time of his death.” 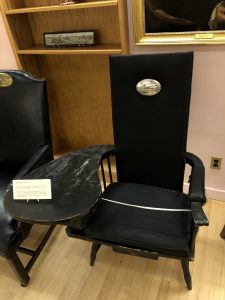 The DeWitt Clinton chair not occupied by Eric Foner (sitting in this chair is not permitted). 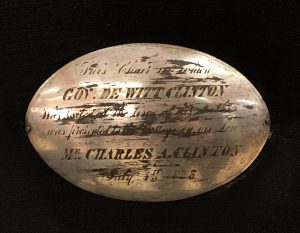 Close up of the plaque on the chair, which reads: “This Chair, in which GOV. DE WITT CLINTON was seated at the time of his death, was presented to the College by his Son, MR. CHARLES A. CLINTON, July 1st, 1828.

DeWitt Clinton was an alumnus of whom Columbia College was proud.  He was the first student to graduate after its name changed from Kings College, in 1786.  He served three terms as mayor of New York City, from 1803 to 1815, one term as Lieutenant Governor, and two terms as Governor of New York.  In 1817, under his leadership, the New York State legislature approved $7 million in funding for the construction of the Erie Canal.

Governor Clinton left behind plenty of unfinished business when he died in this chair, on February 11, 1828.  He was so deeply in debt that the Clinton family was forced to sell most of their possessions to satisfy his creditors.  New York State honored Clinton with an elaborate state funeral befitting a popular governor who died in office, but his family was unable to afford a burial plot for their patriarch.  Instead, they borrowed space in the family vault of an old friend, Samuel Stringer.

Gift-giving is always laden with subtext, though that subtext depends on the culture and era in which the gift is given.  The gift of a chair in which another person died is a dubious honor to even the least superstitious twenty-first century Americans.  Our first impulse, upon finding ourselves in possession of such an object, would almost certainly not be to bestow it upon the deceased’s alma mater.  Yet nineteenth century Americans felt otherwise.

Furniture and other household goods had more value before industrialization increased the speed and decreased the cost at which they could be manufactured.  These items were regularly enumerated in wills and bestowed upon friends and loved ones throughout the nineteenth century.  Colleges and universities probably still preferred that alumni remember them in cash, if they had a choice in the matter.  The Clinton family was cash-strapped, though, and the chair is of good quality.

Having accepted the chair, Columbia College—like many recipients of well-meant but puzzling gifts—now faced the problem of what to do with it.  It seems to have ended up in the president’s office, for lack of any better ideas.  Frederick A. P. Barnard succeeded Charles King to the presidency in 1864.  He apparently did not enjoy sharing his office with the chair.  On December 5, 1864, the Trustees resolved that the chair should be kept in the college library instead. 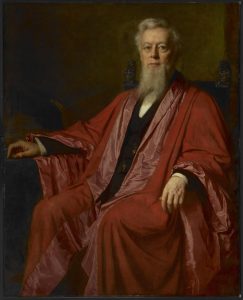 Frederick A. P. Barnard, President of Columbia College, 1864-1889; not a fan of the chair in which DeWitt Clinton died.

Like a restless spirit, DeWitt Clinton’s chair continued to drift from place to place, never quite settling anywhere at Columbia.  The chair became part of the university’s historic Columbiana collection at some point after 1864.  In November 1926, the Museum of the City of New York displayed it as part of an “Old New York” exposition.  By 1937, it was on display in the Columbiana rooms on the first floor of Low Library, according to John William Robson’s A Guide to Columbia University.  The Committee on Art Properties even tried to place the chair on long-term loan to a museum in 1985, but no one wanted it.  The chair moved to its current location when the Columbia University Archives joined the Rare Book and Manuscript Library’s space on the sixth floor of Butler Library.  Here, it amuses and unsettles staff members and researchers alike.

Incidentally, DeWitt Clinton’s body found its way back to New York City, too.  About fifteen years after the chair arrived, Brooklyn’s new Green-Wood Cemetery needed a resident celebrity to help sell burial plots.  Clinton was still famous enough to qualify.  Green-Wood offered an honored burial spot—complete with heroic bronze—which was certainly a more suitable resting place than a borrowed vault for a former governor who was nicknamed “Magnus Apollo.”  So Charles Clinton agreed to have his father’s body exhumed and transported south.  DeWitt Clinton spent another decade in a borrowed vault at Green-Wood, this one belonging to cemetery trustee Jacob Leroy.  His body was exhumed and re-interred for the last time in 1853. 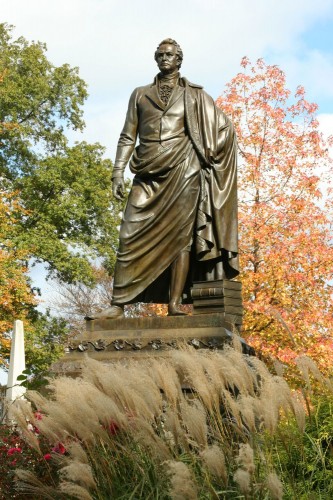 The heroic bronze atop DeWitt Clinton’s grave at Green-Wood Cemetery. Courtesy of The Green-Wood Historic Fund.

DeWitt Clinton’s spirit has also been rumored to roam.  It has never been sighted at Columbia, though.  Perhaps our current campus, built in the 1890s, is too newfangled, or the chair has unpleasant memories attached to it.  Instead, Clinton’s ghost seems to prefer to occupy a place where Clinton spent happier times in life:  the office of the mayor at City Hall.