Our colleagues in the Oral History Master’s Program (OHMA) have an exciting  line-up of talks and workshops for spring semester.

END_OF_DOCUMENT_TOKEN_TO_BE_REPLACED

The Oral History Master’s Program at Columbia has released their fall line-up of workshops. This year’s theme, Oral History and Storytelling, considers storytelling as an underused tool in academic oral history practice. 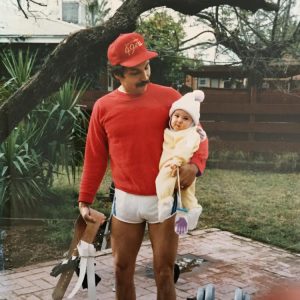 From workshop, “Finding Fathers: A Cautionary Tale for Oral Historians”

September 12, 2019
Europe according to Auschwitz: Experiments from the Laboratory of Reportage

October 24, 2019
Standing With Sky Woman: A conversation on cultural fluency

November 7, 2019
“Necessary as Water”: Queer Black Ceremony and the Depth of Listening

Noted African-American newspaper, the Chicago Defender, announced earlier this summer that it will cease print production. The weekly paper, founded in 1905, played a crucial role in providing news for scores of migrating African-Americans. With the rise of industrialization, job creation and seeking greater opportunities than in the South, migrants relocated to the North, especially Chicago. The Defender was a resource for establishing black political, social and cultural roots in the city.

A notable number of reporters and editors interviewed for the Oral History Archives’ Black Journalists Collection reflect on the Chicago Defender’s role in their training and influence in creating a black press in American communities. 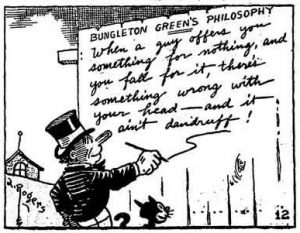 Panel from Bungleton Green, which ran in the Chicago Defender

Blacks in urban centers used newspapers like the Defender to acclimate to cities and new social mores. One feature newspapers used to convey etiquette and ethics for city living was the cartoon Bungleton Green.

END_OF_DOCUMENT_TOKEN_TO_BE_REPLACED

Processing collections and creating finding aids according to updated archival standards gives RBML archivists the opportunity to discover anew our collections. In this post, Processing Archivist Yingwen Huang reflects on creating a new finding aid for the heavily used Wellington Koo Papers. Wellington Koo, a graduate of Columbia and a prominent statesman and diplomat from China, played a major role in positioning China in the 20th Century international political scene. Koo used this papers as the basis for his extensive (10,000+ pages!) oral history interview held in RBML’s Oral History Archives.

“I hope this record will contribute in some small way to a mutual understanding between East and West, and to an understanding of history.” – Speech on the presentation of the Koo oral history to Columbia University, May 28, 1976

At the age of 31, Koo was the youngest delegate in the Chinese Delegation to the Paris Peace Conference. He was the key figure in speaking on the behalf of China in the direct restitution of Shandong province during the conference. He later went on to serve as the Chinese Ambassador to France, England, the United States, while representing China at the League of Nations and contributing to the founding of the United Nations. 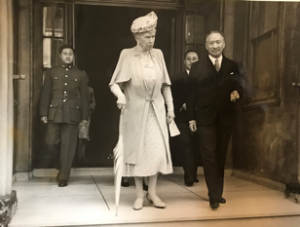 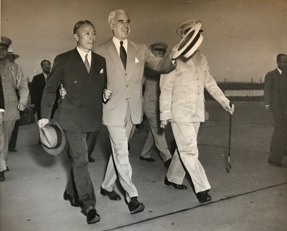 END_OF_DOCUMENT_TOKEN_TO_BE_REPLACED

Let’s be honest: most contemporary awareness weeks and anniversaries are commercially-driven attempts to garner social media clicks and buzz.

But occasionally there’s something worth noting related to the humanities or the sciences. Herewith, the United Nations has declared 2019 the International Year of the Periodic Table. 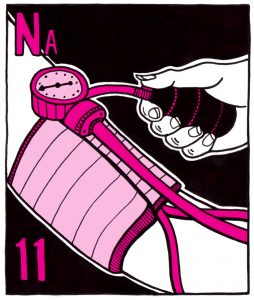 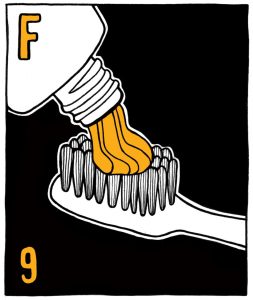 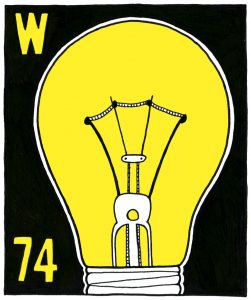 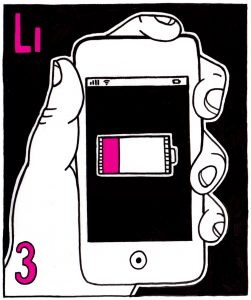 “The Periodic Table” by James Nicholls is licensed under CC BY-NC 4.0

END_OF_DOCUMENT_TOKEN_TO_BE_REPLACED

The Oral History Archives at Columbia (OHAC) is pleased to announce that it will be the sole repository of the official oral histories of the presidency of Barack Obama (CC ’83).

From the University’s official announcement:

Starting this summer and over the next five years, the Obama Presidency Oral History Project will conduct interviews with some 400 people, including senior leaders and policy makers within the administration, as well as elected officials, campaign staff, journalists, and other key figures—Republican and Democrat—outside the White House.

The Obama Presidency Oral History Project also will incorporate interviews with individuals representing different dimensions of daily American life, whose perspectives enable the archive to weave recollections of administration officials with the stories and experiences of people who were affected by the Administration’s decisions. This project will also examine Mrs. Obama’s work and legacy as First Lady.

END_OF_DOCUMENT_TOKEN_TO_BE_REPLACED

The Tunisian Transition Oral History Project’s thirty-eight interviews document the Tunisian revolution (2010-2011) and the period of the transitional governments (2011-2014), with a particular emphasis on the technocratic government of Prime Minister Mehdi Jomaa (January 2014-December 2015). 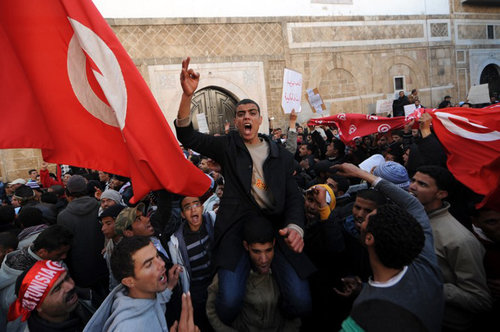 Consistent with the composition of the technocratic government that it documents, the collection’s narrators come from a wide range of expertise: businesspeople, union leaders, NGO leaders, human rights advocates, and bureaucrats in the areas of security, education, economics, and more.

The Columbia Center for Oral History Research, a the Interdisciplinary Center for Innovative Theory and Empirics (INCITE) conducted roughly 110 hours of interviews. Read more about the project on INCITE’s blog.

In many ways, both professionally and collegially, the addition of Yingwen Huang, is a boon to the Rare Book & Manuscript Library.

In particular, Ying has brought both archival and historical perspective on several oral history interviews and supplementary archival materials that were bequeathed to the, as it was known then, Oral History Research Office at Columbia.

In this post, Ying showcases the Chinese Oral History Project, a 1959 oral history project begun with Academia Sinica’s Institute of Modern History and the Claremont Graduate School’s China missionaries project. Ying’s diligent work on this collection addresses valid concerns regarding the processing, cataloging and accessibility of these valuable collections that offer a window into the historical dynamics shaping modern China. 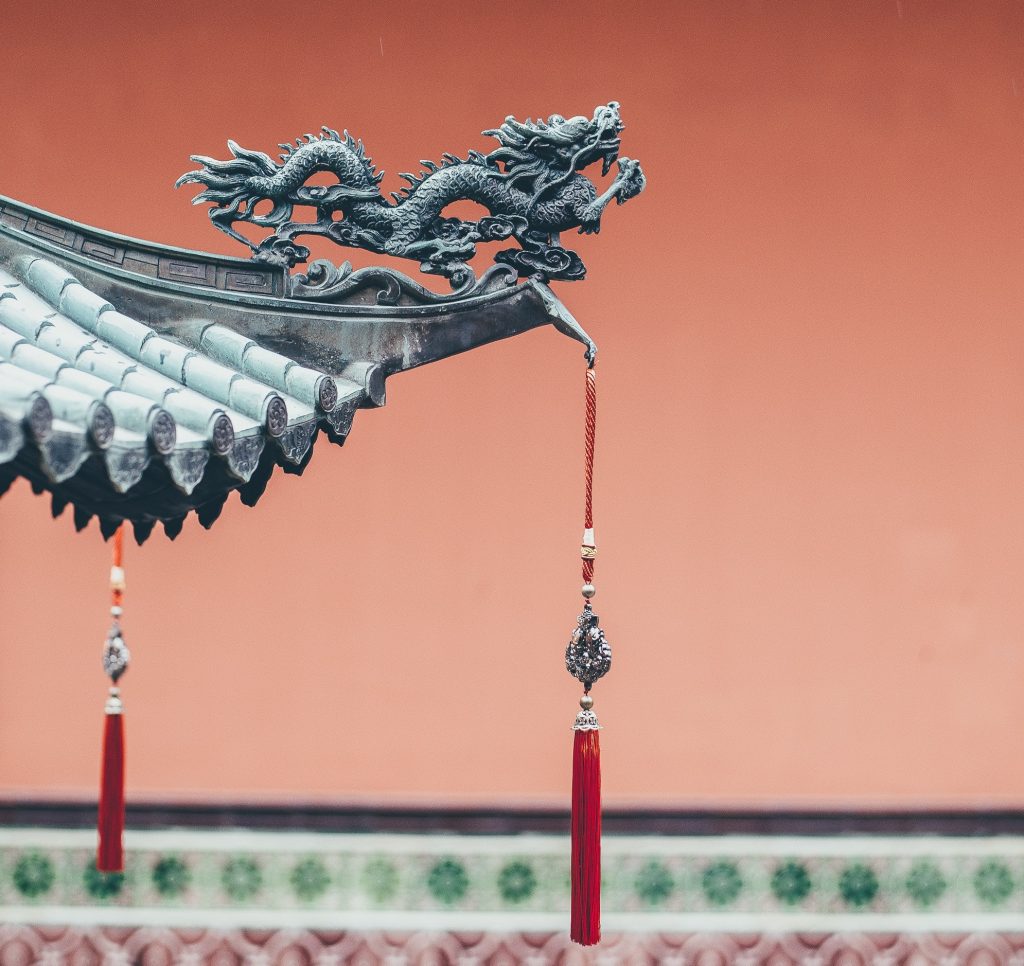 Photo by Annie Spratt on Unsplash

As the Communist party took over mainland China in 1949, Republican officials began to leave for Taiwan, Hong Kong, and the United States. In 1957, Clarence Martin Wilbur, the professor of Chinese history at the Columbia University’s East Asian Institute, was inspired by Allan Nevins’ American oral history project to start a Chinese oral history project and saw the possibility of procuring primary historical sources using oral history interviews to capture the life stories of these prominent Chinese political officials living abroad. Professor Franklin L. Ho, who at the time was the Professor of Chinese Economics, agreed to join as the project’s co-director. The project officially began in 1958 and ended in 1980. Over two decades, the project’s oral historians interviewed a total of 19 prominent Chinese figures from the Republic of China period and produced a total of 16 extensive oral history interview transcripts in English, with many later were translated and published in Chinese and English. The project also collected eight autobiography manuscripts from related individuals as well as 13 interviewees’ personal papers.

Over two decades, the Chinese Oral History Project’s oral historians interviewed a total of 19 prominent Chinese figures from the Republic of China period and produced a total of 16 extensive oral history interview transcripts in English… 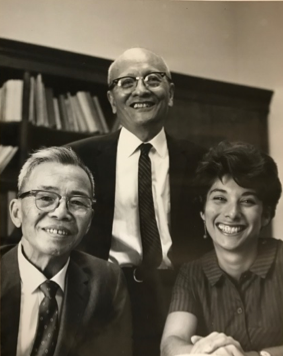 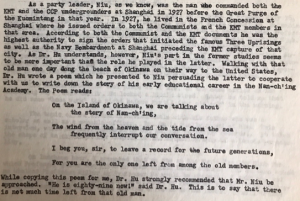 The oral history project at the Academia Sinica’s Institute of Modern History began in 1959. The project was initially subsidized by Columbia and later funded by the Ford Foundation. The project focused on collecting oral histories from important political and military figures who settled in Taiwan after the Communist took over in mainland. The interviews documented the lives of political figures representing nearly all provinces of Republican China. The Academia Sinica oral history project deposited a total of 37 finalized handwritten oral histories transcripts, photographs, diaries, and memoirs at Columbia.

The interviews documented the lives of political figures representing nearly all provinces of Republican China.

The Oral History Archives at Columbia also house two versions of the Peter H. L. Chang (Zhang Xueliang) oral history transcripts as well as his papers that were opened to the public in 2002 on his 100th birthday. One of the interviews was conducted by T. K. Tong in 1990 and another by the Chang sisters (Chih-ping Chang-Sobelman and Chih-yu Chang) from 1990 to 1993.

In addition to the aforementioned projects that mainly focus on the Republic of China period, the oral history archives also collected oral histories of Chinese-Americans in New York as part of the September 11, 2001 Telling Lives Oral History Project and the Nobel Laureates Project on scientific research project, which include the Reminiscences of Tsung-dao Lee and the Reminiscences of Chen Ning Yang.

Thank you to Chengzi Wang and his article,  “Chinese Oral History Collections at Columbia: Toward Better Access” in the Journal of East Asian Libraries.

The Oral History Master of Arts Program is pleased to announce the spring portion of its 2018-2019 workshop series: Oral History and the Future: Archives and Embodied Memory

Oral history is a conversation about the past that takes place in the present and is oriented towards the future. How is this future orientation made real?

Oral history as a research practice, particularly in the United States, has been defined by a focus on recording and archiving in institutional repositories. But people can be archives too, and oral history-telling practices more broadly often depend on embodied memory, on person-to-person transmission. And because people have been formally recording and archiving oral histories for over seventy years, we are now living in the futures imagined by earlier generations of oral historians.