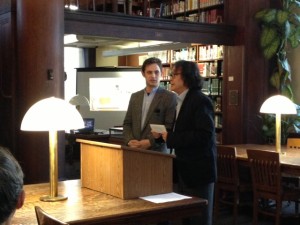 On Tuesday April 30 a dual event entitled "Meeting with Xu Bing and His Work at Columbia" took place in the Starr Library and the EALAC lounge.  Guest of honor was the famous Chinese artist Xu Bing, who recently donated one of his artworks Reflections While Reading to the Library.

The program started off with a reception in Starr's reading room, followed by remarks from Damon Jaggars, Associate University Librarian, Collections and Services, Robert P. W. Hymes, Chair of the Department of East Asian Languages and Culture and H. Walpole Carpentier Professor of Chinese History, Wang Yansheng, Cultural Counselor of the Consulate General of the People's Republic of China in New York, Robert Harrist, Jr., Jane and Leopold Swergold Professor of Chinese Art History, and Xu Bing, Professor and Vice President of the Central Academy of Fine Arts in Beijing.  After the remarks the donated work, now installed in the Library's reading room, was formally unveiled.  The reception was extremely well attended and animated. 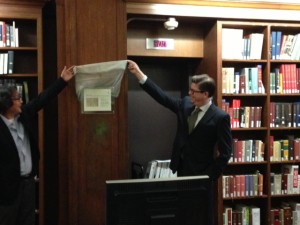 The unveiling was followed by an dialogue between Xu Bing and Lydia Liu, Wun Tsun Tam Professor in the Humanities.  This portion of the program took place in the EALAC lounge, and was so well attended that some latecomers were unable to even enter the room.