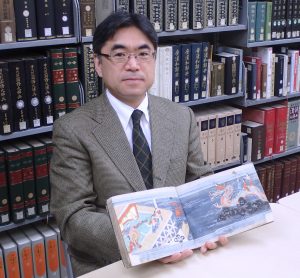 The C.V. Starr East Asian Library, the Department of East Asian Languages and Cultures, the Donald Keene Center of Japanese Culture, and the Weatherhead East Asian Institute will sponsor a special workshop on Japanese Book History.

Guest instructor,Takahiro Sasaki, Professor of Japan classic bibliography of the Institute of Oriental Classics (Shidō Bunko/斯道文庫), at Keio University, in Tokyo, Japan. In this workshop it is his intention to talk about the history of Japanese books and focus on a meaningful interrelation between bindings and its stored contents, including pictorial illustrations and diagrams. From a historical perspective, the early Japanese books have been strongly influenced by China; nevertheless, the origin of early Japanese books has its own unique and independent development that is separate from China and the Korean Peninsula. In China and the Korean Peninsula, the printed publications became the core of books at an early stage of their history, and the formats suitable for print publications have been employed for books. On the other hand, in Japan, because publications were slow to spread as the manuscripts were central and had prevailed for a long time, the early Japanese books developed their originality. In Japan, the different formats for making books, or book-binding techniques, were used concurrently during the same era. The different book-bindings were believed to have been used depending on the purpose of the book and the contents of the book, which were meant to be stored. Therefore, he discusses, in Japan, by paying attention to the binding of the book, one can understand its contents. (Presentation in Japanese with English translation)