The Story of Emily Gresser: A Stage Success from among the Strings

Born, on March 11, 1894 into a highly cultured Russian Jewish Emigré family. Emily was the most musical of her four siblings and began performing publicly at 8 years old. By the age of nine, she had already performed Schumann’s “Traumerei” for the Teacher’s Society of the Norwegian Church in Brooklyn.

Under the tutelage of composer, Sam Franko, she joined 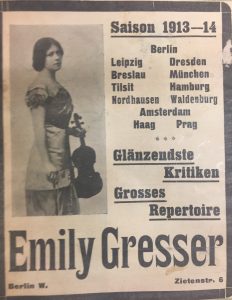 the Children’s Orchestra at the Educational Alliance. Following her graduation recital at Mendelssohn Hall, Emily started gaining a fan base among the famous names of the day, such as Booker T. Washington and Harvard President, Charles Eliot. After one performance, Mark Twain proclaimed to her “My child, you do not know how
much joy this evening gave me, how I enjoyed your playing.”

Emily’s light as a wunderkind was burning so brightly,  she declined scholarships to attend Vassar and Barnard, choosing instead to follow her passion and study music in Germany. Despite the outbreak of World War I, Ms. Gresser managed to fill concert houses in New York and across Germany from 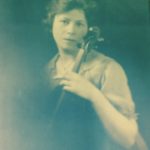 1914-1916. It was then, she built an act with the vocal star, Yvette Guilbert and managed to successfully tour the United States despite the war.

Following her time touring with Yvette Guilbert, Ms. Gresser went on to become a frequent collaborator and close friend of Jasha Heifetz, Efrem Zimbalist, Mischa Elman and Yehudi Menuhin. Many of her original scores and sheet music complete with annotations and occasional autographs are available in this collection.