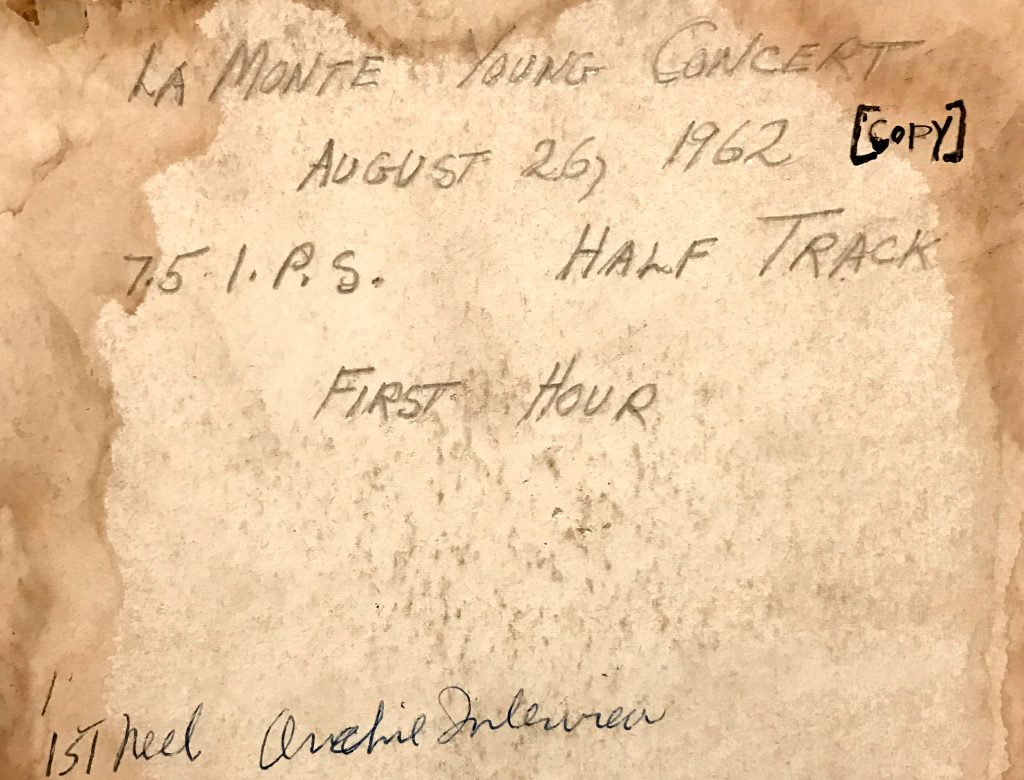 Cover of audio reel from the Amiri Baraka Papers (Box 91)

A recent acquisition by Karla Nielsen, Curator of Literature, of material relating to La Monte Young and Angus MacLise from Kenneth Mallory Booksellers coincides with a unique, historical audio recording discovered recently in the Amiri Baraka Papers (pictured above).  The set of 1964 concert posters for La Monte Young’s performing ensemble, then consisting of John Cale, Tony Conrad, and Marian Zazeela, represent the beginnings of The Tortoise His Dreams and Journeys, a well-known yet sparsely publicly-documented work by Young and the Theater of Eternal Music that came to be a musical turning point for Young and his colleagues.

Even more obscure than The Tortoise are the precursors to that work, yet a moldy audio reel box discovered in the papers of Amiri Baraka with the inscription “La Monte Young Concert August 26, 1962” came to light during digital preservation of the collection’s audio-visual materials.   With the help of Jung Hee Choi, friend and collaborator of La Monte Young, we were able to identify more exactly what the contents reflect.

The tortoise recalling the drone of the holy numbers as they were revealed in the dreams of the whirlwind & the obsidian gong & illuminated by the sawmill, the green saw-tooth ocelot & the high-tension line stepdown transformer : [advertisement]. Call number: ML45 .P63 1964g. ML45 .P63 1964g

The concert took place August 26, 1962  at 10-4 Group Gallery, 73 Fourth Avenue, New York, NY and was titled “26 VIII 62 Evening NYC.”  The ensemble consisted of La Monte Young, Soprano Saxophone; Angus MaClise, Hand Drums; Marian Zazeela, Voice Drone; Billy Linich (later Billy Name), Voice Drone.  The pieces they presented in this concert were [Untitled].  La Monte wrote of the program, “These pieces were evolved during the daily rehearsals of my Theatre of Eternal Music over the period from Spring 1962 until the inception of The Tortoise in the Winter of 1964. The work of this period involved static permutation techniques of my own design applied to constellations of pitches over various stationary and movable drone combinations.”

While the box containing the tape indicates an hour of music, in fact there is not much more than ten minutes worth of the concert reflected on the tape.  The majority of the tape consists of an extended interview with saxophonist Archie Shepp.  We could presume that at that time, when La Monte was primarily playing saxophone in the group rather than singing alongside Marian, Amiri Baraka saw a common interest in the two musicians with a more direct association than would be obvious today.  Beyond just conceptually overlapping for Baraka, it also appears that the Shepp interview is recorded over the missing minutes of the La Monte Young concert on the tape.

The second portion of the recent acquisition is an addition to our existing collection of Angus MacLise Papers. MacLise, who plays hand drums on the August 26, 1962 concert recording aforementioned, in 1962 also published an alternative calendar entitled Year.  Previously not well-represented in our MacLise collection, our 2017 Addition now includes several typed and handwritten manuscripts and revisions for Year, as well as correspondence, around the publication.  The MacLise Year calendar, since its publication, has maintained interest in the avant-garde music and poetry communities, and there is even a Twitter feed (@MacLiseYEAR) which bills itself as a day-by-day recitation of the work. 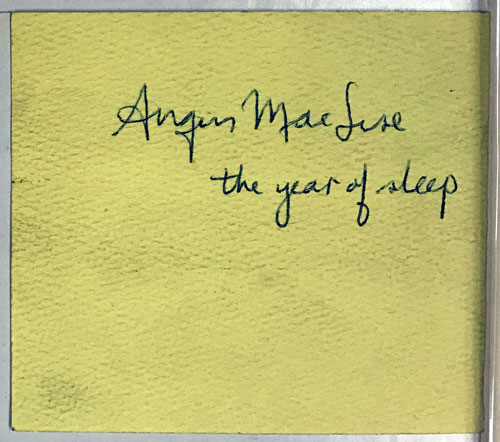 Note in MacLise’s hand, affixed to “YEAR” manuscript in the 2017 Additions to Angus MacLise Papers.