(This is Part I of a two-part story. Read part II.)

In 2018, the Lorraine Montenegro Women and Children’s Program Facility opened in a new building at 773 Prospect Avenue in the Bronx. With $12 million from New York State, this residential recovery center was built on the site where United Bronx Parents (UBP) began and worked for decades to improve the health and education of its community. The original building was called “La Escuelita,” and it was known in the Bronx as a hub for activism, community development, and social services. The new facility was named after UBP’s second executive director, Lorraine Montenegro, who died in 2017 in the aftermath of Puerto Rico’s Hurricane Maria. The RBML’s newly processed collection documents UBP’s path from its founding and the legacy that the new facility sought to honor. 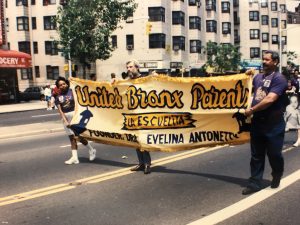 In 1965, United Bronx Parents began as a grassroots coalition of Puerto Rican parents and activists concerned with the quality of their South Bronx public schools. Founder Evelina López Antonetty (1922-1984) brought her experience as an organizer and as a parent together to call for changes to an unequal and segregated school system. United Bronx Parents led workshops that trained parents to advocate for bilingual schools, more relevant curricula, and free lunch, among other demands. They called for “parent power,” joining the many Black and Latinx activists that fought for community control in the 1960s. These efforts led to the decentralization of the New York City school system in 1969. Other successes included the founding of the first bilingual public school in New York City, and a free summer lunch program that fed thousands of children.

Documents from UBP’s workshops and program proposals evoke the powerful impact of their early work. Many are bilingual—in Spanish and English—and reflect UBP’s anti-racist, anti-colonialist vision for collective action and a more just public school system. A particularly interesting set of documents is from the planning for Universidad Urayoán, a bilingual four-year college that United Bronx Parents opened in 1973. Influenced by Paulo Freire, UBP stated that the university’s goal was “the development of the new person that is conscious of his origin, heritage, and responsibility to his community.” Although the university did not last long, its existence and course offerings reflect UBP’s mission and vision for higher education in the 1970s, and are exciting materials for scholars to explore further.

These records from the 1960s-1970s have significant value to researchers of education in New York City, and build on the more comprehensive collection held by Hunter College’s Centro de Estudios Puertorriqueños. However, they only make up a small portion of the RBML’s collection; the majority dates from 1990-2010. Furthermore, the early materials arrived at the RBML in folders that contained mold, and will not be accessible to researchers until they are treated. They had been stored in the basement of UBP’s office for many years, which exposed them to humidity and flooding. Unfortunately, it is very common for storage conditions like this to lead to mold and require special treatment. 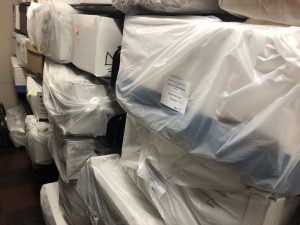 Bagged boxes contain mold and need to be treated or removed from the collection.

While the mold in this part of the collection adds challenges to its preservation, the inclusion of other documents from later in UBPs history, especially the 1990s and 2000s, makes the collection especially significant for understanding the ways that UBP changed over time. Between 1965 and 2011, when it joined the larger social service organization Acacia Network, the organization shifted from a grassroots activist group to a nonprofit service provider, though it continued to emphasize its roots as a “community grown organization.”

Rachel Klepper is a Ph.D. student at Teachers College studying History and Education.