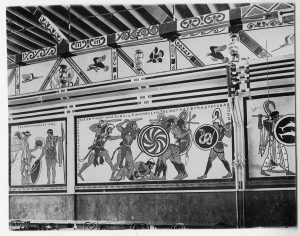 The University Archives exhibition cube currently features some photographs of the University Commons, the on-campus dining room in the old University Hall located behind Low Library. The Commons had served as a highly-efficient cafeteria while the student-soldiers of the Student Army Training Corps (SATC) were on campus in 1918-1919. With the end of World War I, a committee was tasked with devising a plan to make the unattractive and previously barely-used University Commons more appealing to the students and staff. Management was placed in the hands of University officials who had known success at Teachers College and during the SATC days. In the weeks following the Summer Session of 1919 the entire look of the room was transformed: paintings were placed on the walls featuring scenes from Greek vases, surrounded by verses from Homer and Hesiod, and even the rafters were decorated. The changes were a huge success. 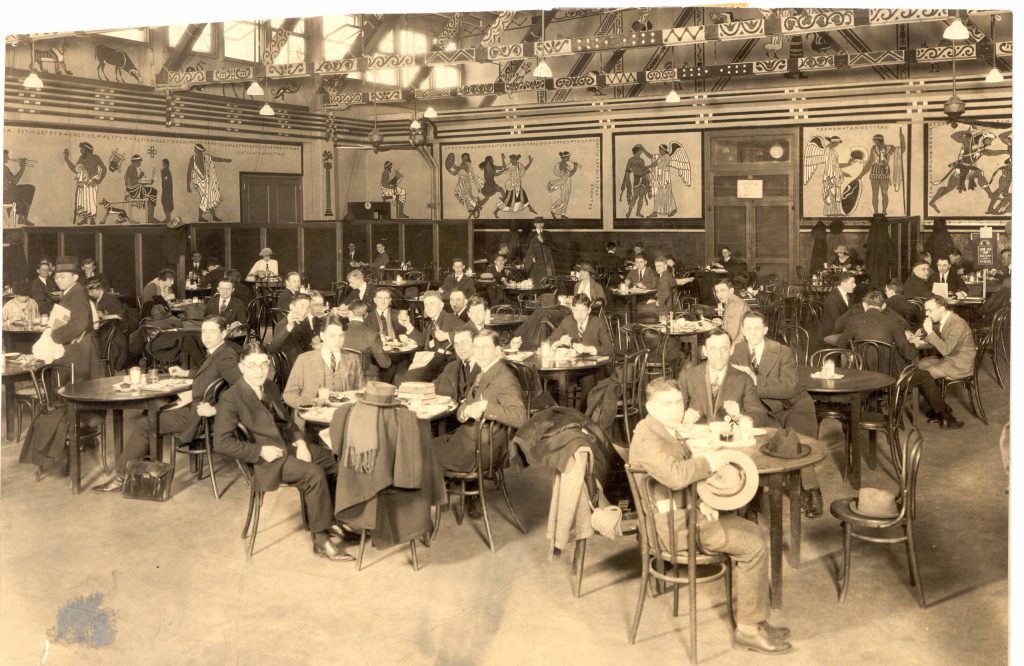 Running a restaurant on campus had been a difficulty proposition. Every year the University would lease the dining Commons to a private operator, but as University President Nicholas Murray Butler noted in his 1920 Annual Report, the operator had to contend with “the absence of so many students on Sundays and holidays, which reduces the income without lightening the overhead charges, and by greatly increased attendance at the mid-day meal.” For the SATC, the dining room needed to go from providing an average of 200 lunches to over 3,500 meals a day.  The University reached out to Miss Emma R. Baker and Prof. C. T. McFarlane, from Teachers College, to run the dining room, and based on their success during the SATC days, they were asked to do so during the academic year in 1919.

The room itself, which Butler described as “most unattractive,” was “skillfully decorated under the supervision of Professor W. A. Boring of the School of Architecture.” Arthur T. Hewlett, CC 1892, and J. Monroe Hewlett, Arch 1890, produced the Greek vase-painting inspired designs. The panels featured adaptations of one or more images depicted on Greek vases and a similar color scheme was used on the walls and rafters. Each panel included an inscription in Ancient Greek, taken mostly from Homer and Hesiod as seemed appropriate to the scenes depicted. Or, in Butler’s words, “the walls of the room … were adorned with interesting cartoons copied from Greek vases.”

Not only did the Commons provide “satisfactory food … at a reasonable rate, in a comfortable and attractive room,” but the University was also able to manage the operation without a loss. According to a pamphlet about the Greek panels written by Edward Devlin Perry, Jay Professor of Greek, the average number of meals served from January to June 1919 was 300 a day; the average served in 1922, 1200 a day. However, after the opening of the John Jay Hall dining hall and grill in 1927, the University Commons lost favor as the one on-campus food destination. The University Commons closed in September 1936. The high-vaulted space was then used to house studios for university art courses for a few years. During World War II, the space was used to store supplies in anticipation of purchasing difficulties and war shortages. In 1962 University Hall was finally demolished and replaced by the Business School’s Uris Hall, built on the foundations of the old building.