A sheet of paper at Columbia’s Rare Book and Manuscript Library shows how a Black woman sought—and won—justice in 1791 America.

This story originally appeared on Columbia News on September 16, 2021.

Columbia Rare Book and Manuscript librarian Jane Siegel was browsing the stalls at the Brooklyn Antiquarian Book Fair in September 2019, when she saw an 18th-century document on display. The single sheet of paper was covered in handwritten text. It wasn’t particularly striking visually, and there was nothing at first to hold her attention. But then bookseller Ian Brabner began to tell her the sheet’s backstory. 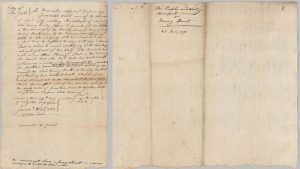 The document was a deposition given in 1791 by a formerly enslaved woman named Nelley Mumpherd. In the document, she described an attempted assault and the theft of her “freedom papers”—the certification that she was a free woman. Mumpherd initiated a criminal case against her attacker—and she won.

“As soon as I heard this story,” Siegel said, “I realized the piece would fit so well with our collections, especially as it was about a woman negotiating her life here in New York City.”

Freedom Papers as a Vital Defense Against Re-enslavement

In the deposition, Mumpherd forcefully conveyed the facts of her case. In July 1791, a man named Henry Hurt had come to her lodging house, entered her room, and tried to assault her. She was able to escape, but the next morning she realized that Hurt had stolen a significant amount of money, as well as her freedom papers.

For African Americans at the time, these documents served as a vital defense against the all-too-real dangers of kidnapping and re-enslavement. Despite the risks, Mumpherd pressed charges against her assailant, delivered her deposition, and testified later at his trial. On August 9, 1791, the court of general sessions heard the case and sided in her favor. Hurt was convicted and “committed to gaol.”

Two years after Columbia’s Rare Book & Manuscript Library acquired Mumpherd’s deposition, the document remains as dramatic and inspiring as at the moment of its discovery. But scholars’ evolving understanding of its context has made us rethink our initial assumptions. We thought we had found a needle in a haystack, yet the truth is far more compelling. Although it is quite unusual for such an artifact to have survived for 230 years, the case itself was not as exceptional as it first appeared.

An All-white Jury Awards Restitution for Slavery in the 1850s

Mumpherd, in fact, was part of a broad, yet largely forgotten, tradition of everyday people—including free and enslaved African Americans—who, in the 18th and 19th centuries, turned to local courts for some modicum of justice, and frequently received it. “The evidence of that tradition is there in the archives,” said W. Caleb McDaniel, professor of history at Rice University, “though it takes work to uncover it. Often it’s only present in manuscript sources like this one.”

McDaniel wrote of this tradition with particular poignancy in Sweet Taste of Liberty: A True Story of Slavery and Restitution in America, which won the Pulitzer Prize for History in 2020. In the book, he explores the struggles of Henrietta Wood, a free Black woman in 1850s Ohio, who was kidnapped and sold to slavers in the Deep South. Following the Civil War, Wood was able to sue her kidnappers, and in 1878, an all-white jury awarded her restitution of $2,500. According to McDaniel, this remains “perhaps the largest sum ever awarded by a court in the United States in restitution for slavery.”

McDaniel’s research into Wood’s successful suit for reparations has become an important touchstone for contemporary activists, such as Jordan Brewington (CC ’17), a Reparative Justice and Racial Equity Fellow at the ACLU of Louisiana. “The movement for reparations in the United States began with the demands of the enslaved,” Brewington has written. “Long before the Civil War or the popular abolitionist movement, enslaved people petitioned for individualized compensation for their years spent in bondage.” 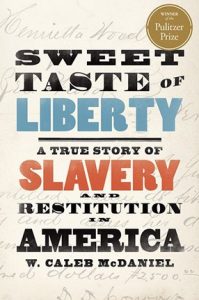 Liberty, as well as the history and politics of the reparations movement, during a virtual event hosted by the Lehman Center for American History and the Forum, a program of the Office of the President.

Mumpherd and Wood lived in different regions of the country, more than 50 years apart, and the dissimilarities in their circumstances complicate direct comparison. But McDaniel’s research suggests that the two women faced some of the same obstacles. And certainly both of them shared a refusal to submit to injustice.

“I think Mumpherd’s deposition represents how precarious freedom was for free Black women in this period,” said McDaniel. “It raises the question of what kind of freedom depends on a piece of paper, of documentation, to secure it. Wood’s story focuses us on that question as well. Both cases also show that the other side of that precarity is a story of struggle, of African American women fighting back and holding attackers to account.”