Once in a while, as an archivist, you come across records that are so extraordinary that you simply stop and stare: partly in awe and partly in puzzlement. 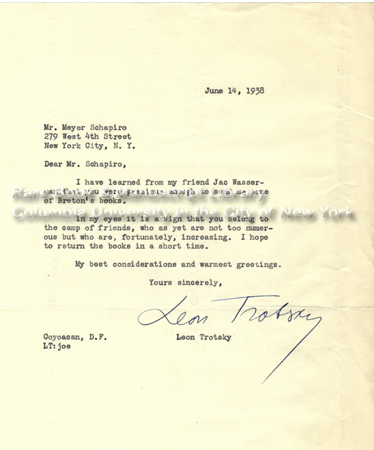 This happened to me as I was processing Meyer Schapiro’s correspondence files several months back. I came across a letter from the well-known political thinker Leon Trotsky.

Aside from the fact that the letter was from Trotsky himself, I was also shocked to read that Schapiro had lent Trotsky books relating to the Surrealist artist, philosopher, and over all enfant terrible André Breton.

The relationship between Schapiro, Breton, and Trotsky is a complex one. All three knew each other, but never met as a group. They did, however, share a common interest in the arts and politics, and also, apparently, some books.

As Trotsky writes on June 14, 1939 to Schapiro from Coyoacan, Mexico, (he was in exile and writing one year prior to his death): “I was informed from my friend Jac Wasserman that you were gracious enough to send me some of Breton’s books. ¶ In my eyes it is a sign that you belong to the camp of friends, who as yet are not too numerous but who are, fortunately, increasing. I hope to return the books in short time.”

According to a typescript in Schapiro’s research files relating to Breton, Schapiro writes that he had seen Breton in 1939 in the Paris neighborhood of St. Germain-des-Près, but that they officially met in June of 1941 through their mutual friend, the artist Gordon Onslow-Ford.

As Schapiro writes of their 1941 encounter: “He [Breton] received me with a studied courtesy and graciousness. Gordon [Onslow-Ford] was radiant with happiness in the presence of Breton, as if he were showing me his father of whom he was inordinately proud before the world, and he was also proud before Breton for having presented him to me. Breton discussed so many things that I can no longer remember the order of our conversations; we talked for three hours about painting, poetry and psychology and the personalities of some artists.”

Breton and Trotsky, on the other hand,  knew each other from their meetings in Mexico while Breton was traveling there on a cultural mission granted by the French Ministry of Foreign Affairs. In 1938, Breton, alongside Diego Rivera, wrote a treatise on how art can be in service of the revolution, Pour un art révolutionnaire indépendent, which was inspired from that visit in Mexico and the meeting with Trotsky.

Breton, however,  had an ambiguous relationship with politics in general, and Marxism in particular, because political activism was always cloaked under the mantle of Surrealism, as Pierre Taminiaux writes in the article “Breton and Trotsky: The Revolutionary Memory of Surrealism.”

This may be why Schapiro would denounce Breton after the death of Trotsky, when Breton criticized the political leader for not bringing the revolution he promised: “Just as Kerensky attacked Lenin by asserting that Lenin as a boy tormented dogs in the streets of his village, Breton attacked the dead Trotsky for his rationalistic treatment of dogs and his illusions about them. Always dogs in the resentments of these deposed exiles! But to imagine that a Breton who devotes his days to speculations about occultism, astrology and playing cards, and constructs a black gadget to register all the significant events about the year 1713, which resembles the signature of his initials, should scold the revolutionary hero and greatest political thinker of our time, for not providing the revolution he has promised to Breton. If you do not give it to us soon enough, warns Breton, we shall have to excommunicate you from Surrealism.”

Schapiro’s characterization of Breton’s edict on Trotsky brings to light the many allegiances and friendships that Surrealism either shaped or broke.

In all, its curious how, in hindsight, Breton, Schapiro, and Trotsky  have become emblematic of the spheres in which they worked in: as artist, art historian, and political thinker respectively. It also shows how intricately connected the art world and the political sphere were back in the 1930s and 1940s and how, at times, hidden relationships (and the books exchanged) are not really known unless you have archival records to prove them.