Editor’s Note: We are pleased to welcome Nicole Skalenko and Victor Bretones as guest contributors to the John Jay Papers Blog. Sklaenko and Bretones are Honors undergraduate students in the Department of History at Kean University in Union, New Jersey. They collaborated on a  study of William Livingston (1723-90), the father-in-law of John Jay. Their essay on Livingston’s use of media and propaganda is based on a longer research paper presentation that won the 2019 Undergraduate Award from the Humanities Education and Research Association Conference held in Philadelphia.

When the Revolutionary War broke out in April of 1775, William Livingston faced a plethora of dilemmas. Both as Brigadier General of the New Jersey Militia and the first elected Governor of New Jersey, he faced political and military challenges that included “governmental operations and relationships with soldiers and civilians in the midst of significant armed conflict.”1 Livingston understood the power of the press and utilized this tool to help overcome political divide in New Jersey. Livingston issued both proclamations and propaganda in order to sway New Jerseyans in support of independence.

Livingston was no novice in terms of contributing to a political public sphere. After graduating from Yale College, Livingston published anonymously Philosophic Solitude: Or, The Choice of a Rural Life (1747). In 1752, he established The Independent Reflector, a political journal with William Smith, Jr. and John Morin Scott. All three men provided essays that challenged the political, religious, and educational history of New York. Although Livingston enjoyed success in New York as a lawyer, he yearned for a life in the country, surrounded by nature. Livingston therefore retired to New Jersey in 1772, but two years later, he was thrust back into politics as a delegate to the first and second Continental Congresses. Later, he was appointed Brigadier General of the New Jersey militia and on August 31, 1776, he was elected governor of New Jersey.

Livingston’s connection with print continued in collaboration with Isaac Collins, a Quaker printer. Starting in 1777 they produced The Votes and Proceedings of the General Assembly of the State of New Jersey and the newspaper New Jersey Gazette. Prior to working with Livingston, Collins was the Royal Printer of The Votes and Proceedings of the General Assembly of the Colony of New Jersey (1770-75). Collins consulted with Livingston on the format of the pamphlets, writing on February 7, 1777, “I have received the nine Acts of General Assembly and shall begin the work on sight of a proper title page.”2 He further asked “should not the Constitution be printed at the beginning of this pamphlet as these laws are the first published under the new government?”3 With the aid of Collins, Livingston thereby played a vital role in shaping government use of print in New Jersey.

As the American Revolution continued, Livingston took up his pen in service of the cause. The first propaganda piece attributed to Livingston was an anonymous article in the Pennsylvania Packet (reprinted in the Norwich Packet). In the article entitled “Impartial Chronicle,” Livingston poked fun at Hugh Gaine’s loyalist newspaper, New-York Gazette and Weekly Mercury, and fabricated claims such as, “We learn by an Indiaman loaded with tea, that the Emperor of Indostan has offered his Majesty five hundred elephants out of his own stables, to assist in suppressing the rebellion in the colonies.”4 The “Impartial Chronicle” illustrated real fears that colonists had at that time.

Livingston faced a major dilemma by late September of 1777. The British had occupied New York and captured Philadelphia. Prior to these events, New Jersey relied on print sources from neighboring colonies and had no need for their own. With the British occupation, print shops began publishing material that was largely in support of the loyalist cause. Livingston recognized the urgency in providing New Jersey with its own reliable news sources. His main concern was the lack of enthusiasm for independence within the colony and believed this was due to the effectiveness of the “Tory press.”

Livingston therefore approached the New Jersey Assembly in October 1777 arguing it would be “to New Jersey’s advantage to have its own circulating newspaper,” claiming further:

His efforts proved successful as Isaac Collins was appointed printer of the New Jersey Gazette, and the first issue was published on December 5, 1777.

Livingston contributed numerous propaganda articles to The New Jersey Gazette. He utilized up to fourteen pseudonyms, among them Hortentius, De Lisle, Cincinnatus, Belinda, and “A True Patriot.” He often wrote sarcastically and attacked the British Monarch directly. For instance, in the September 9, 1778 issue of the New Jersey Gazette, he exclaimed, “But I am astonished that men of fashion and spirit should prefer our hopscotch, oliverian, oligarchical, anarchies, to the beautiful, the constitutional, the jure divino, and the heaven-descended monarchy of Britain.”6 In May of 1778, a difficult period for Patriot forces,  Livingston wrote three separate propaganda pieces signed under Belinda, Hortentius, and “A True Patriot” in response to the Carlisle Commission, a British peace commission sent to negotiate a peace treaty with the “rebellious colonies.” He signed under the pen name Belinda in order to garner women’s support, and declared “rather than suffer your sex to be caught by the bait of that arch-foe to American Liberty Lord North, I think ours ought, to a woman, to draw their pens, and enter our solemn protest against it. . .”7 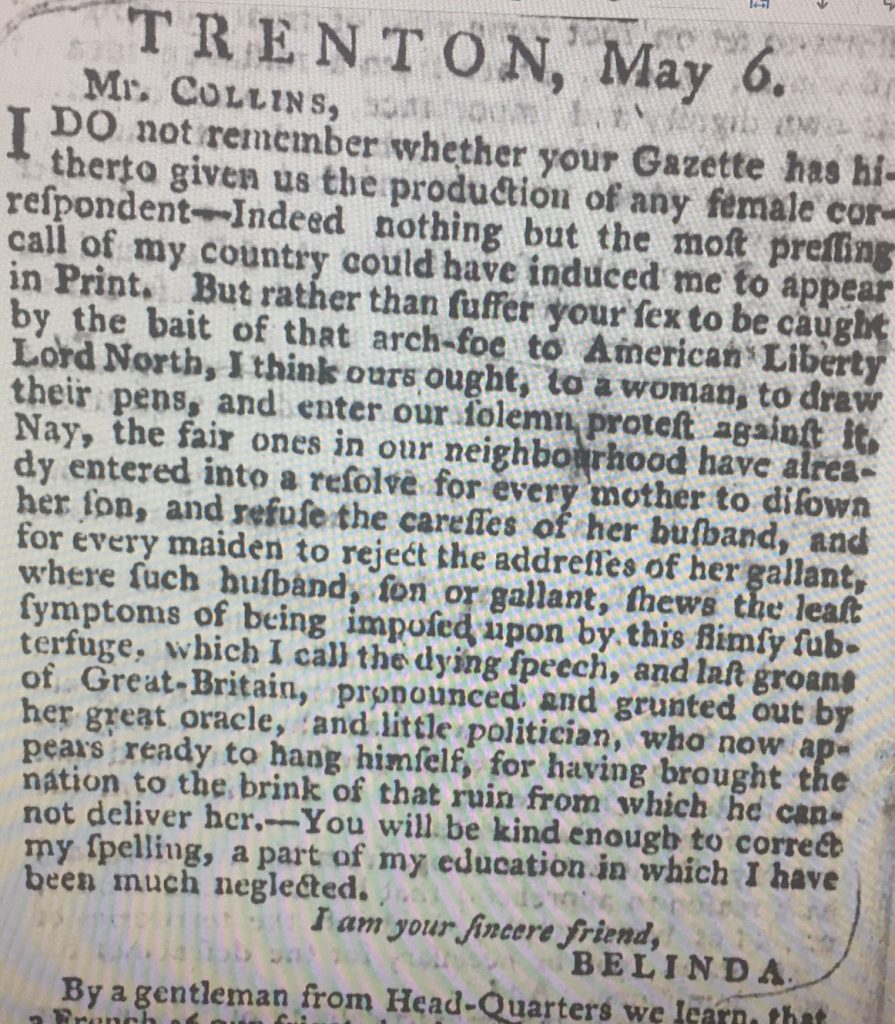 Additionally, Livingston utilized the New Jersey Gazette as a means to affirm his reelection as governor. On October 27, 1779, Livingston signed a letter under the pen name Cincinnatus in which he provided characteristics essential to a future governor such as; “He ought to be a prodigious writer, – that is to say, he ought to be very great in the News-Paper way.”8

Livingston therefore understood the power of media to support political causes in the eighteenth century. Along with Collins, he rallied New Jerseyans to the patriot side and helped them keep the faith, even when surrounded by loyalists and disheartened by military defeats.