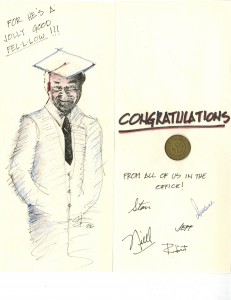 Alongside documenting the activities of its creator, a fonds (a collection of records that originate from the same creator or source) will unintentionally preserve artifacts from another time. This is fascinating because an artifact can also provide a history of the particular period of time in which it was made and used. Today’s post reveals how the Tafel archive documents a piece of the history of the New York City subway.

In this case, I found a New York City subway token – fascinating to me because as I am not a native New Yorker, I have never seen one. Every city’s subway system is different however, some still even using tokens to this day. And having lived in a few different urban cities and being able to compare their subway systems, opinionated conversations about which subway system is the most efficient intrigue and amuse me.

The token is glued to a card made by Tafel’s employees on the occasion when Tafel became a Fellow of the AIA in 1986. Perhaps in the context of Tafel’s elevation to being a Fellow including the token in the card was to evoke the line: ‘that and a subway token will get you downtown’?

This particular type of subway token was in use from 1980-86 (see others here). Subway tokens in New York went out of commission in 2003. An interesting piece of subway memorabilia in the archive!