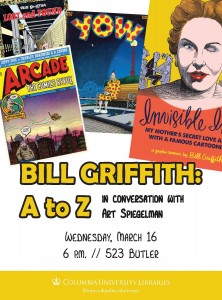 The cartoonist Bill Griffith has had a storied career, from his early underground comics featuring Mr. the Toad, to his long-running character Zippy the Pinhead, to his involvement in the influential comics anthology, Arcade, to his recent foray into long-form comics with his revelatory family history Invisible ink: my mother’s secret love affair with a famous cartoonist.

Griffith, a native Brooklynite, published some of his earliest comics in the East Village Other, then moved to San Francisco to join the burgeoning underground comix scene.  There he introduced Zippy and co-founded Arcade with Art Spiegelman.

Now back on the east coast, Griffith has decided to bequeath a substantial portion of his archives to Columbia’s Rare Book & Manuscript Library.  While the Zippy dailies will find a home in Columbus OH, at the Billy Ireland Cartoon Library & Museum, the archives of the early underground comic books, of Arcade, and of his graphic novels will be available for researchers here in New York City.

In celebration of this future–we hope, far in the future!–gift, Comics@Columbia and the Rare Book & Manuscript Library present a conversation with Bill Griffith and Art Spiegelman, moderated by Karen Green.

Please join us for this event, and for the reception to follow.