The scholars Mae Ngai and Mia Bay have won this year’s Bancroft Prize award, one of the most prestigious in the field of American history. The Libraries proudly administers this Prize, an honor for historians and by historians. Ngai, author of The Chinese Question: The Gold Rushes and Global Politics, is Columbia’s Lung Family Professor of Asian American Studies and Professor of History, and Co-Director of the Center for the Study of Ethnicity and Race. According to this year’s jury, “The Chinese Question brilliantly shows us how much of the white Anglo-American world came to view the Chinese as a racially unassimilable and threatening people, a race theory that shaped the development of global capitalism, prompted exclusionary immigration policies, and, Ngai argues, haunts us still.”

Q: What was the most memorable part of learning you’d been awarded the prize? Who was the first person you told?

Ngai: The first person I told was my husband. Then my editor and my agent. I had to keep it a secret until the New York Times announced it. It was really hard to keep a secret for that long!

Q: The Bancroft Prize is seen as the historian’s prize, which you certainly know from your work on the Prize jury in recent years. What was most meaningful to you about this recognition?

Ngai: I am deeply honored to be recognized by my peers because they are the toughest judges. Historians know how to evaluate the research that goes into our books, the research that makes a story either rich and compelling, or thin and unconvincing. We read the footnotes! Historians also care about narrative. Like other writers, we also are story tellers, but we don’t make anything up. And finally, historians judge whether an argument or interpretation is a rehash of older scholarship or something that is genuinely new and consequential. It’s especially meaningful to me that The Chinese Question is the first book of Asian American history to be recognized with the Bancroft Prize. For too long, these communities and their histories have been considered marginal to U.S. history.

Q: How have recent events caused you to think again about the research, questions, and findings that went into your book? Have the past two years made parts of that history seem even more immediate and crucial than before?

Ngai: Unfortunately, racism and violence against Chinese Americans and Asian Americans is not new. I could not have predicted the extent of the recent surge of racism but as it unfolded it did sharpen a sense of urgency to tell this origin story. I’ve also been thinking about the relationship of anti-Asian and anti-Black racisms. The book does discuss the links between the anti-Chinese movement and the contemporaneous reversal of civil rights for African Americans in the late nineteenth century, but I might have written more about it. Then again, the book is already over four hundred pages long.

Q: The Bancroft Prize hopes to award the most significant and impactful historical works. What makes a work of history impactful? What’s the highest goal of historical writing?

Ngai: People tend to think that historians simply write about the past. In fact, our questions about the past are framed by our thinking about the present, and those questions always point to the future. At any point in time, the future is not inevitable or preordained. People (and societies) have choices. They may be more or less constrained by circumstance, but there are always ch 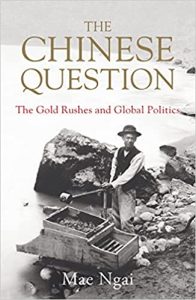 oices. That was the case in the past and it is true in our own time: what kind of future we want to work toward? In this sense all historical writing is political.

Q: Can you reflect a little bit about your research process, and especially the ways archival research played a role?

Ngai: The book is based mainly on archival research. The problem with researching Chinese emigrant workers in the nineteenth century is that they did not leave many records. But one can find them in all sorts of places—sometimes in their own writing, but also in mining-claims registers, tax rolls, payroll ledgers, census manuscripts, and directories; in the letters, journals, and account books kept by others; and in newspapers and other publications. The more places you look, the more you will turn up.

For example, I was interested in the Chinese gold diggers who worked in egalitarian cooperatives, which shared all profits and expenses and had no bosses. I saw some examples in the California records, but in general there are very few claims registers extant in California. In Victoria (Australia) the colonial government kept full records, which are well preserved, and the pattern was clearly evident there. Working across sources in two gold rushes, I was able to corroborate a general pattern. Or take Xie Zixiu, who wrote a lengthy exposé (in classical Chinese) about the conditions of Chinese gold miners in South Africa that circulated in China. This is a rare document from an eyewitness Chinese perspective, not necessarily indisputable but it allowed me a check against British and South African sources. But who was he? I found him in the archives of the British Foreign Office, described as Thomas Ah Sze. He had worked for a South African gold mining company as its “Chinese advisor,” but quit after the company ignored his reports of abuse. He traveled to London to complain to the company’s main headquarters. His reports, as well as the company’s telegrams and letters that followed him, which attempted to discredit him, were not in the archives in Pretoria, but in London.

Q: Who are the people that supported you throughout the research and writing of this book?

Ngai: I could not have researched and written the book without the help of the many graduate research assistants, who plowed through the sources with me, and colleagues in U.S. and non-U.S. fields, who pointed me to sources, read draft chapters, and saved me from my errors. I’m also grateful for my family’s love and support, especially that of my husband John, which sustained me over the very long course of the writing of this book. I share the honor of this prize with them all.