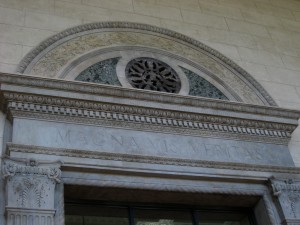 Inscribed atop the arched marble doorway inside the Butler Reference Room are the words MAGNA VIS VERITAS.

The phrase is taken from chapter 26 of a work by the Roman orator Marcus Tullius Cicero, the Pro Caelio Rufo  (sometimes rendered merely, Pro Caelio). This speech was delivered in 56 BCE, on behalf of a life-long friend, a young man of good family named Marcus Caelius Rufus.  Caelius was accused of a variety of moral and legal crimes, notably involvement in an attack two years earlier on a deputation of Alexandrians concerned with Ptolemy’s dethronement.

The accusation conformed to the Roman Lex de vi, which concerned itself with vis: literally “force” or “power,” but in legal terms  “violence,” particularly that dealing with armed bands that disturbed the peace.

Cicero, after detailing the virtues of Caelius and condemning the behavior and motives of those who accuse him, focuses on a rather vague accusation of poisoning included in the charges, and in turn accuses the witnesses for the prosecution of lying.  Then, in a flight of rhetoric, he adds this, cleverly playing on the word vis:

In the translation of R. Gardner in the Loeb Classical Library, this reads:

How great is the power of truth, which when opposed to human ingenuity, cunning and craft, and opposed to all the falsehood and treachery in the world, is easily able to defend itself unaided!

The architects of Butler Library, of course, were less interested in this historical context, and more interested in the concept “Great is the power of truth.”  For the true goal of a liberal arts education is to teach the critical thinking skills that allow one to recognize the truth, no matter what its guise.