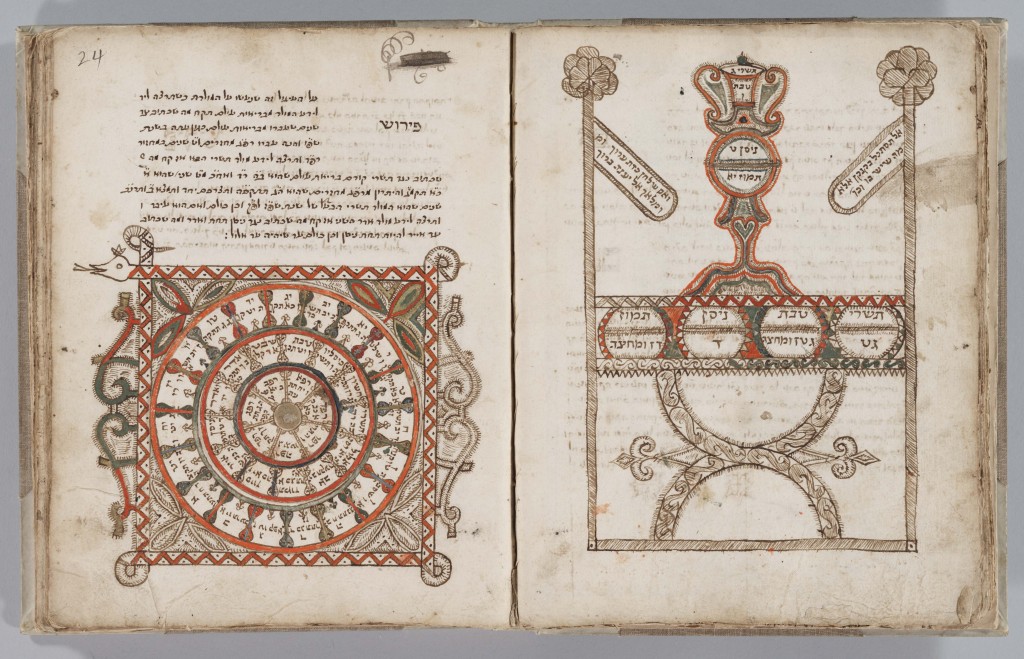 This manuscript is one of many Hebrew calendar books that we hold in Columbia’s Rare Book and Manuscript Library.  This particular copy (call number: MS X893 Se36), was most likely produced in the 17th century, probably somewhere in Germany.

From the CLIO Record: "The Ms. is done in magnificent fashion and contains a large number of illustrations, tables and even mechanical devices in all of which several colors are employed. In addition, many drawings are included that do not bear on the text at all but are merely decorative, for example a picture of Adam and Ave covered with fig leaves (leaf 19b), or Agag’s execution by Samuel (16b)."

The circular image on the left is one such mechanical device.  It is a series of three circles, laid one on top of the next, which can be spun to match up years, months, and days.  Want to spin the wheel yourself?  Click here to give it a spin! (Note that it only works in Chrome and Firefox 4.)  Thanks to Schuyler Duveen, Senior Programmer at the Columbia Center for New Media Teaching and Learning (CCNMTL), for putting this together!

This image shows the 23rd and 24th leaves of the manuscript.

For more information on Sifre ‘Evronot (included the two images mentioned in the CLIO record above), see "Palaces of Time: Illustration of Sifre Evronot in Images : a journal of Jewish art and visual culture (available to computer users on the Columbia campus here, or in the Avery Art and Architecture Library (see the CLIO record here) by Columbia Professor Elisheva Carlebach.

Note: To browse the Hebrew manuscripts in CLIO, enter X893 as a Call Number Exact.  As of today, there are 1018 manuscripts listed.