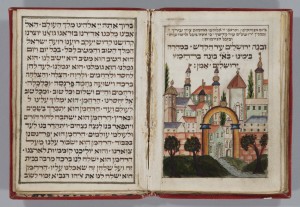 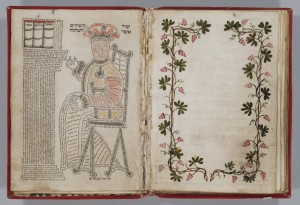 In 1824, a mohel and doctor named Yeḥezḳel Trish living in Lipník nad Bečvo (in the Czech Republic) received a gift from a man named Yonah Ḳaṿo.  It was a small manuscript book, which contained prayers and exquisitely detailed illustrations relating to his craft, that of circumcision.

Two of the spreads are shown here.  The first image is one of Jerusalem, just below the prayer for the rebuilding of Jerusalem in Grace After Meals (which would have been said after the customary meal following the circumcision).

The second image is the very last page of the manuscript, which seemingly has nothing to do with the rest of the content.  This page contains a micrographic image of Solomon, seated, with three of his books (Song of Songs, Ecclesiastes and Proverbs) on the column in front of him.  Both Solomon and the column were drawn using the words from Song of Songs.