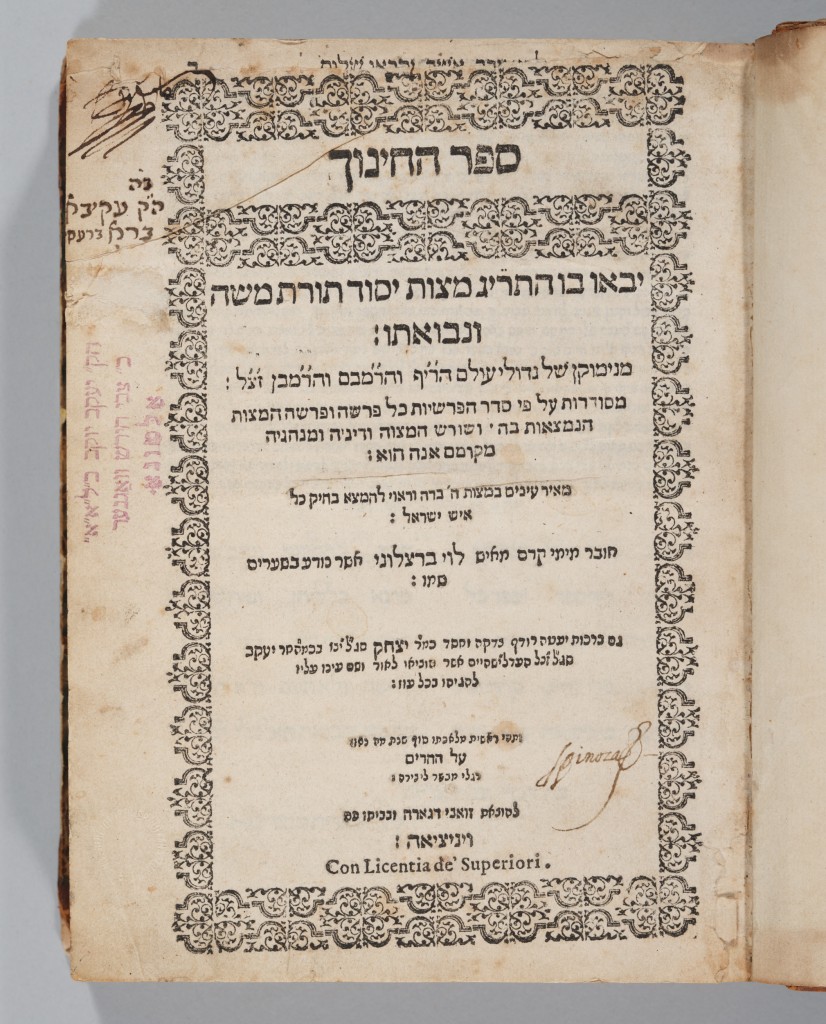 The advantage to working in a collection such as Columbia's, with its very deep and diverse resources, is that new and interesting materials pop up almost daily.  A couple of months ago, I received a phone call that someone wanted to come and look at our Spinoza autograph.

Columbia is home to the Oko-Gebhardt Spinoza collection, with nearly 4,000 volumes by and about Barukh/Benedict Spinoza.  Until the phone call, however, I did not know that any autographs by the controversial philosopher himself were present in our collection.  I hurried over to the Rare Book and Manuscript Library, where I saw the volume shown here.  It seemed a bit strange, as the text, Sefer ha-hinukh, is a work about the commandments of Judaism, but I speculated that perhaps this was something he owned very early in life, perhaps even as a child.

I emailed Professor Adriaan Offenberg in Amsterdam about the find, knowing that Professor Offenberg has done a tremendous amount of research on the subject, and that the only known autographs by Benedict Spinoza were in Amsterdam.  His response was tremendously helpful, and told a totally different story:

The signature shown here is actually in the hand of Raphael Jesurun de Spinoza, born around 1617, and also known as Bartholome Rodrigues Henriques.  His name is mentioned in the Portuguese Community of Amsterdam's archives between 1657 and 1673.   There are at least six known books that contain his signature, one of which, a Bible, caused a tremendous controversy in the 1950s, when a scholar published its manuscript notes assuming that it had belonged to Benedict Spinoza.  Dr. Leo Fuks, the librarian of the Bibliotheca Rosenthaliana at the time, published a very strong rebuttal in Dutch, in Amstelodamum (November 1959), which proved that the signature was not Benedict's.

No doubt Raphael Jesurun de Spinoza was an interesting figure as well, even if he wasn't the philosopher that I had hoped he would be.  Through him I learned a fascinating story about scholars and scholarship, and of the importance of thoroughly researching a topic before jumping to any conclusions.

Many thanks to Professor Offenberg for his help in demystifying this enigma.