On the fall holiday of Sukkot (also known as the Feast of Tabernacles) Jews construct temporary huts (reminiscent of the temporary existence of the Jews in the Sinai Desert) and acquire a selection of greenery (palm fronds, citrons, myrtle and willow branches) for ritual use. The final days of the holiday, Hosha’ana Rabba, Shemini Atseret, and Simhat Torah, are not very well known.  Hosha’ana Rabba concludes the judgement period begun with the High Holidays – if the judgement is written on Rosh Hashana and sealed on Yom Kippur, it is considered to be delivered on Hosha’ana Rabbah.  Thus this day has symbolic penitential prayers as we will see below.  Shemini Atseret and Simhat Torah are connected to one another, and celebrate the completion of the annual cycle of reading the Torah. Simhat Torah is often celebrated with merriment and dancing.

Of course, all of these are well represented in Columbia’s Judaica collections.

The earliest representation of a Sukkah in our collections is probably a manuscript fragment from the Cairo Geniza featured in a 2012 exhibition; its text comes from Yitshak Alfasi’s commentary on the laws in the Talmudic Tractate dealing with the holiday – as you can see above, it includes a diagram of a Sukkah as part of the discussion.

A recent acquisition shows a decoration that would have been hung in the Sukkah. In the image illustrated above, someone took an illustrated printed page (meant for use as a title page), and wrote in the center the verse from Leviticus 23:42 describing the holiday of Sukkot: “and you shall dwell in Sukkot for seven days.” The Hebrew date at the top is the equivalent of the year 1796, and with the bright colors (added by hand) it would have made a lovely decoration for the Sukkah.

Most of our Sukkot-related manuscripts are prayer books. Columbia’s collection includes quite a few from the Comtat Vennaissin region in France, in the “Minhag Carpentras.” These are written in the distinctive Comtat script, and often have beautiful title pages and careful illustrations as in the image on the left. The community of the Comtat was protected by the Popes, who controlled the region, and a special prayer was said on Simhat Torah for the health and well-being of the Pope who protected “his” Jews. (Except for that one time when Louis XIV occupied the Papal States and the Jews had to change the prayer…)

We have many manuscripts that address the the “hosha’anot,” where the congregation circles the synagogue, waving the lulavim and etrogim and singing special prayers. The root of the Hebrew word “hosha’anot” means “salvation,” and the phrase “hosha’a na,” or “please save [us]” occurs throughout the prayer. Below is a lavishly illustrated title page and first opening of an 18th century volume dedicated to the Hosha’anot from the Italian communities of Asti, Fossano, and Mocalvo (abbreviated as “APaM”) 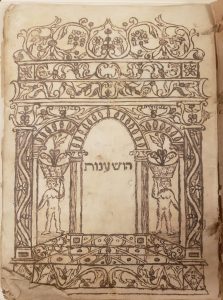 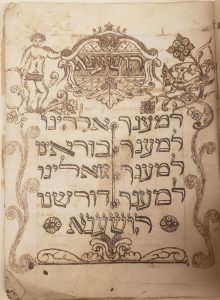 The manuscript on the right, currently on display as part of the “Jews of Corfu” exhibition, is decorated with leaves – perhaps ‘aravot, or willow branches (ritually bound with the lulav on Sukkot) – surrounding the text. Hosha’anot occur during the entire Sukkot, but the Hosha’anot Service on Hosha’ana Rabbah was especially long.  In some places, the evening was called “lel hotemet” or “the eve of the sealing,” referring to completion of the judgement period, and penitential prayers were recited.

Some leaves from a manuscript for Hosha’ana Rabbah from Avignon (1693) show how the prayers must have gone on well into the evening. Traces of tallow or wax from the candles spot the volume throughout the Hosha’ana Rabba service, as you can see below: