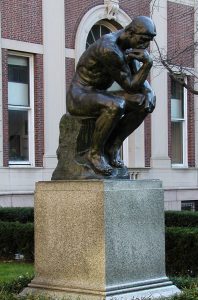 The following post was written by Tanya Moe, a student in the “Public Outdoor Sculpture at Columbia and Barnard” undergraduate seminar in Spring 2017. This excerpt from her research paper discusses what is arguably Columbia’s most easily identifiable public sculpture on campus and how it came to be installed outside Philosophy Hall in 1931.

Columbia University’s relationship with its most famous sculpture The Thinker (Le Penseur), by the artist Auguste Rodin (1840-1917), began in the late 1920s under the administration of Nicholas Murray Butler, who was President of Columbia for 44 years. Under Butler’s leadership the campus was expanded and enrollment increased. He elevated the school’s reputation to make it one of the leading higher-educational institutions in the world.[1] Alongside Butler’s many feats of bolstering of the university’s educational programs was the commissioning of a cast of Rodin’s Thinker.

The acquisition of the statue took about two years. The earliest letters in the Rare Book and Manuscript Library document that the process began in 1929. Butler’s decision to acquire the statue was part of a movement “to beautify and to adorn the grounds at Morningside and to give them a more attractive and impressive appearance than they now have.”[2] During discussions, two locations were suggested for The Thinker: in front of Kent Hall; or, outside Philosophy Hall. In a letter to Henry Lee Norris, the Director of Works at Columbia, Butler expressed his preference for the latter location of the two: “The effectiveness of the statue in front of the School of Mines is so fine that I should not like to have anything less good for Philosophy Hall.”[3]

The statue outside the School of Mines that Butler referred to was The Hammersmith (Le Marteleur), designed in 1884 by the Belgian artist Constantin Meunier.  Columbia’s cast was commissioned by the School of Mines (now Engineering) Class of 1889 and installed on campus in 1914 outside their building, now known as Lewisohn Hall. Meunier’s works elevate the image of the industrial worker into an icon of modernity, as demonstrated in the strong pose of Le Marteleur, making it an appropriate representation of the School of Mines and its programs in mining and engineering. The sculpture was later moved outside the new Engineering building on the northeast corner of campus.

Following the symbolic relationship between buildings and statues, it is understandable why Butler preferred the contemplative Thinker to stand outside Philosophy Hall. In a meeting of the Committee on Buildings and Grounds in 1930, Butler again put forward an argument for the statue to be placed in front of Philosophy Hall. In another letter to Norris, he wrote:

This preference rests on two considerations: first, that the statue Le Penseur is most appropriately placed in front of a building which bears the name “Philosophy,” and, second, that in that place it will balance the impressive statue “Le Marteleur” on the other side of the quadrangle in front of the School of Mines.[4]

In another letter, Butler bolstered his argument by stating further, “We should then have two of the masterpieces of the two greatest modern sculptors on our Quadrangle.”[5] Unfortunately, the lawn in front of Philosophy was already occupied by the Venetian well-head, which had been presented as a memorial of the Class of 1887. This issue was addressed with a resolution by Butler as such:

If we should put the well-head which is now in front of Philosophy at the middle point of this quadrangle, might it not serve as a motif for some architectural and landscaping development, not too costly, of a character that would make the quadrangle itself very attractive and serve as a model of what we should like to do throughout the grounds?[6]

This quadrangle was the space bounded by the Chapel on the south, Fayerweather on the east, Schermerhorn on the north, and Avery on the west. Norris (Director of Works) and William M. Kendall (an architect at the firm McKim, Mead & White) both agreed with Butler’s suggestion and the well-head was moved.

In June 1930, Butler ordered the replica of Rodin’s statue after having visited the Musée Rodin in Paris. He suggested the pedestal be shorter than the one at the museum, as it was “in [his] judgment, too high.”[7] Butler expected the statue to arrive before August 1st, but he was soon informed that “the authorities of the Rodin Museum wish Columbia University to have an entirely new copy of the statue.”[8] Thus, a new statue was cast by Alexis Rudier, from the Rudier Foundry, where many of Rodin’s bronzes were cast. This new statue delayed plans for installation by around six months, but The Thinker was eventually installed in early 1931 in front of Philosophy Hall to balance with The Hammersmith outside the School of Mines.