In the past week, I sat down with Navid Zarrinnal, PhD candidate and Dean’s Fellow, Department of Middle Eastern, South Asia, and African Studies (MESAAS), and asked him a few questions about Islamic manuscripts, his work with the Muslim World Manuscript project and his research.

Welcome, Navid. Can you please introduce yourself, your field of study, and your intellectual interests?

Sure. I am a PhD candidate in the Department of Middle Eastern, South Asian, and African Studies (MESAAS); I am in my last year of studies, so I am about to graduate! In the broadest terms, I work as a historian of the Muslim Persianate world, with an emphasis on renewing social theory through textual engagement with the Global South. This also makes me interested in colonialism and the impact of imperialism on history and on the epistemology of the present. In fact, the relationship between social theory and historical difference is the central problematic of my dissertation. As I went through my graduate training, and looked at the various theories we studied, I was struck by the fact that the canon we received is often inadequate to explain the histories of the Global South. The problem wasn’t simply about distinguishing between imperialist orientalists and anti-racist thinkers. Received theory, in general, has been thought out in relation to European histories, from Marx to Foucault. Of course, I don’t mean to say that our shared canon is irrelevant to Global South histories. Western colonialism has extended modern, European cognition into the world at large. So, we have to use European-derived cognitive categories. But we also have to account for the ways they fail to explain the histories of Asia, Africa, and Latin America. There’s a lot of exciting literature on this problem of Eurocentrism in theory, (even critical theory) particularly by Dipesh Chakrabarty, Wael Hallaq, and Sudipta Kaviraj. But I would say it hasn’t really entered the mainstream of academic culture, as, say, the problem of racist representations of non-Europeans has.

Can you please give us a brief background regarding some of the intellectual questions you are focusing on and their wider significance in the field?

So, in my research, I focus on the general question of the orientalism of our theoretical categories. In particular, I focus on the application of secularization theory to modern Iranian history (1906-). I argue that it generates more confusion than clarity. Just to give you an example, take a major thesis of secularization: functional differentiation between state and religious institutions, or the cognitive differentiation between the concept of the secular and the religious. In Iran, the differentiation of religion as a distinct category of experience behaved in very different ways than the explanatory models offered to us by secularization theory.

So, we can’t use secularization to explain religious change in modern Iran and come away satisfied. But, then, the changes that occurred also tell us that religion wasn’t as much of a settled experience as it was in premodernity. Starting in the 20th century, Iranians began to experience religious optionality (Charles Taylor has written on this in the Christian context). By this, I mean religious belief and practice changed from being a near inevitability to being an option for many Iranians. So, we’re left with the following dilemma: if Iranian society didn’t secularize in the received sense, how do we explain religious optionality?

The objective of my research is to explain religious optionality based on the internal logic of the Iranian experience. I trace it to one of the earliest institutions of Iranian modernity, namely education reform. I argue that changes in educational institutions, in the meanings of literacy, and in the intellectual agents who produced knowledge transformed education’s means (how one learned) and its end (purpose of learning) from an otherworldly to a worldly constitution, thus allowing space for religious optionality.To summarize all of this, my research lies at the intersection of social theory (or its critique), religious change, and educational reform. The immediate period for my study begins with 1889, the founding of the first, reformed, elementary school (dabestān) in Tabriz, and my study ends in 1934, the founding of the first university (dāneshgāh) in Tehran.

How fascinating! You are also interested in the effect of the educational systems on modernity, on socio-political and lived experiences, and on the agents of transmission of knowledge: can you please speak a bit about this?

Yes, so more specifically on education, I provide a history of the transition from the premodern children’s schooling, the maktab, to new elementary education of the dabestān, by following an impactful literacy advocate, Mīrzā Ḥasan Rushdīyyeh (1860-1944). I try to distance my work from celebratory historiography on reform such as Ahmad Kasravi’s enduring work on the Iranian constitutional revolution (1906-1911) published, I think, in 1940. I attempt to contrast the maktab with the dabestān, without affirming reformist expectations of what “right” education had to be. Although this isn’t easy given that most of our sources are written from the perspective of reformists, and there’s very little oppositional literature to reform from the perspective of those who thought the maktab didn’t need to change. I also examine the transition from premodern madrasa learning to the modern university. And again, we have a lot more sources informing us on the reformed colleges and the university, but far fewer sources on what came before them. But you can still draw a general picture of pre-reform higher education by way of such literature as ādāb al-mutaʻallimīn- basically advisory rules by the ulema on how one must learn—or through ulema biographies (tadhkirah). In addition to educational institutions, I also study the change in agents of knowledge transmission—specifically, the way state-educated intellectual gained the upper hand over the madrasa-trained ulema as legitimate bearers of knowledge.

Providing an empirical picture is part of the story. Conceptually, I go against the existing developmentalist historiography we have on the subject. These works contrast Western development in education with Islamic belatedness, and they end up sustaining the tropes of Western progress against Islamic deficiency, even if they frame their work through the now popular idea of “indigenous” or “localized modernity.” Instead, I try to follow a convergence historiography wherein modern governance shared its tactics between Europe and the (semi)-colonies to link worldly disciplines to learning—although with important differences depending on the locality

In your view, how is education considered a science within the historical Islamic context?

I would say education was more a system of rules (or ādāb to use indigenous nomenclature) advised by the ulema that the learner (at least at higher levels) had to follow on his or her own initiative. Some of the advised rules were pretty different than what we are used to when it comes to education, for example, invocation of prayers or certain dietary rules to improve memory, but then others were more familiar, such as the advice that the learner must postpone marriage to minimize distractions. The vital change of modern, national education was that these rules were no longer produced by the more personable ulema who the student followed. Modern rules (more precisely, disciplines) were produced by the more abstract organization of the state and school, and the rules now followed the student instead—a famous example being the dreaded transcript that structures our learning. (laughs)

What primary resources (manuscripts, archives, etc.) are at your disposal in the States, and specifically at Columbia?

I’ve visited libraries and archives across three continents. A lot of my sources come from my home institution at the Columbia University Libraries. The library has a great collection of lesser-known printed sources in Persian. This includes a wonderful polemical text written by a Hadith scholar against preachers, which I used extensively in my chapter on the transiiton from ulema to state-educated scholars. It is a work entitled Luʾluʾ va marjān … dar ādāb-i ahl-i minbar, by Ṭabarsī, Ḥusayn Taqī al-Nūrī, approximately 1838-1902.

There are also a number of reformist Persian journals from the early 20th century that I used, such as The Iranshahr Journal. 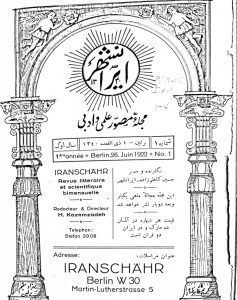 The training I received in cataloging manuscripts for the Muslim World Manuscript Project was really essential. You get very little exposure on how to approach manuscripts in your courses. So, this training was really important in giving me the skills to decipher manuscripts I obtained from the Iranian archives. These archives were pretty varied and included the National Library and Archives of Iran, the University of Tehran Manuscript and Documents Archives, the Library of the Parliament, and the private archives of a major reformer’s granddaughter (Behdokht Roshdieh). And, Tehran’s rare book merchants should also get a mention. A lot of them are really confident about their historical knowledge, so you sit in the shop listening to them for a while! You could say you get a bit of an oral archive while sifting through their rare books!

Have you focused on a specific manuscript or collection in your studies?

The sources I gathered and used were in print, manuscript, and documentary form. They included Persianate travelogues (safar’nāmah), Islamic learning etiquette texts and manuscripts, ulema biographies, documentary sources of the Qajars and the Pahlavis, endowment (waqf) documents, ministerial archives in particular those belonging to the Ministry of Education, primary school documents, annual reports (sāl’nāmah) of higher colleges and the first university, intellectual memoirs and letter correspondences, Persian journals, and unpublished theses belonging to the University of Tehran’s earliest period. The diversity of these sources is crucial, because they provide the necessary material to write about the immediate period of my research (1889-1934). But they also give a lot of insight into how things changed from their premodern into their national form.

What is the significance of manuscripts and material culture for your learning experience and for research in general? 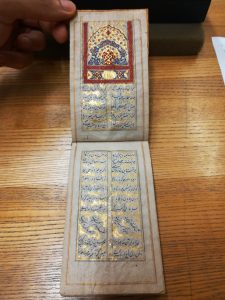 I would say that manuscripts (and archival sources more generally) are very important for the work researchers do. One reason is your ability to contrast the original author’s work with later, edited copies. I recently purchased a reprint of Mahmoud Dawlatabadi’s memoirs—an Iranian reformer of the early 20th century—and, it seemed full of punctuation errors, to the point that the meaning suffered. I would have loved to see the original papers he had written on, to get a better idea of the errors the editor made. This is a relatively small issue when it comes to access to manuscripts. There’s a bigger issue of access that manuscripts give us: the first-hand access into premodernity. Manuscripts have really helped me better identify what I’ve been calling religious optionality. If you follow literate culture of premodernity through manuscripts you see that Islamic metaphysics was very present in them. The institution of the Persian manuscript, for example, demanded that the opening material be grounded in the Islamic worldview, gratitude to the Creator, and the praise of the Prophet Muhammad among other sacred personalities. So, the opening that came before “and then” (ammā baʿd)—the main content of the text—was very God-centered. But, then, modern books in print generally contain a very brief invocation of God’s name on the first page and stop there. This points to an important change, that religion has become less settled and less present, at least in literary production. This is a good example of how access to manuscripts also gives us access to substantive research questions.