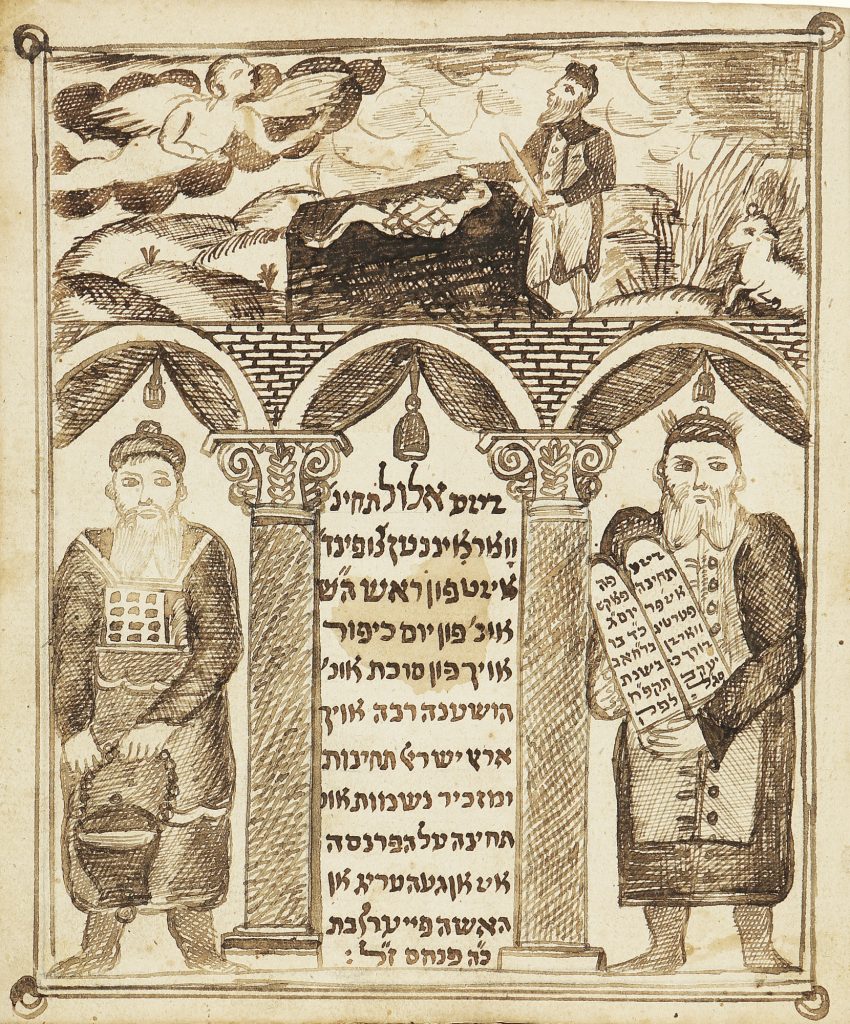 According to the YIVO Encyclopedia of Jews in Eastern Europe, Tkhines, or “supplications” were a “private devotions and paraliturgical prayers usually in Yiddish, primarily for women, published beginning in the early modern period.”  While one of our recent acquisitions definitely falls under the category of Yiddish prayers for women, it was not published, but rather produced by hand, that is, in manuscript.

This small but lovely volume was created for a women called Pearl, the daughter of Phineas and the wife of Abraham Deutsch.  The scribe, Jacob Segal, was clearly a talented writer and decorator.  The text is clear and large, and the illustrations beautiful.  This was clearly a manuscript to be used in heartfelt prayer and devotion.  The manuscript is currently on exhibit as part of “Yiddish at Columbia” in the Chang Octagon Gallery in the Rare Book and Manuscript Library until June 15, and can be found under call number MS General 286. 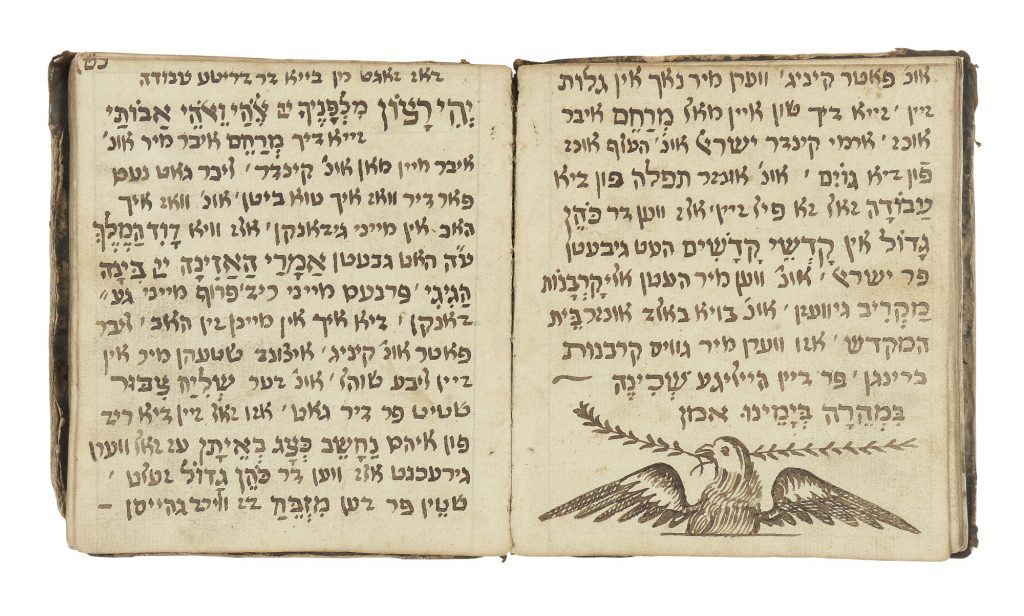 A second new acquisition is a colorful collection of illustrated laws on ritual slaughter, or shehita. 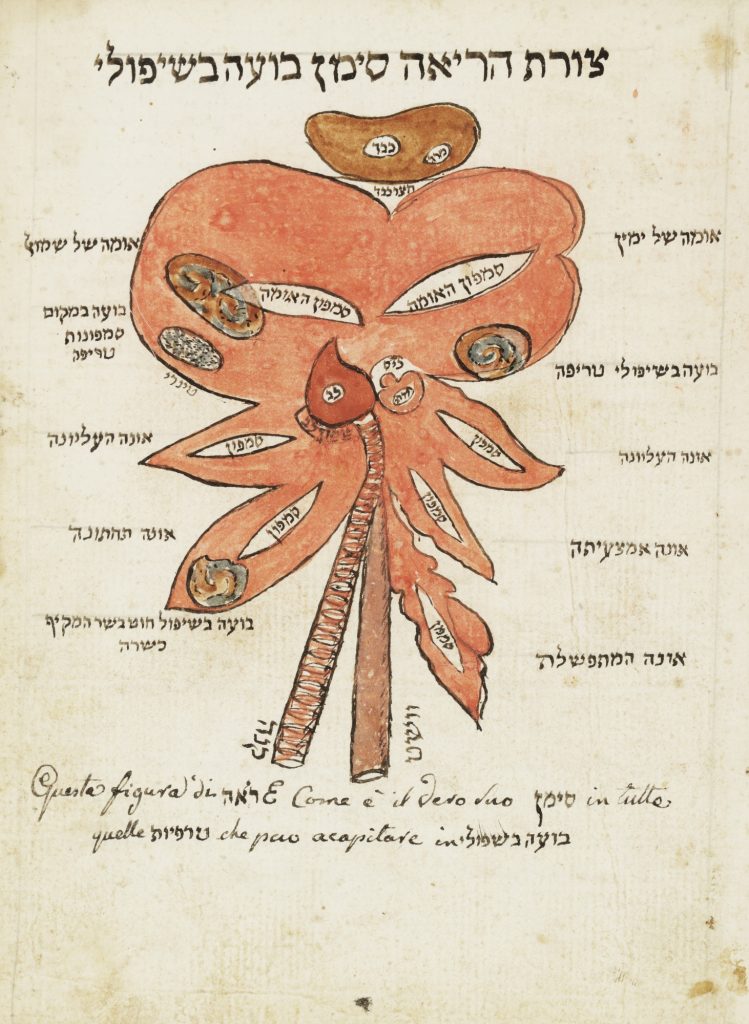 This volume deals specifically with “bedikot,” the laws of checking the animal after slaughter to ensure it is kosher.

The manuscript thus includes a detailed illustration of the animal’s innards, so the shohet (ritual slaughterer) would be able to identify various flaws or defects that would render it treif, or unkosher. 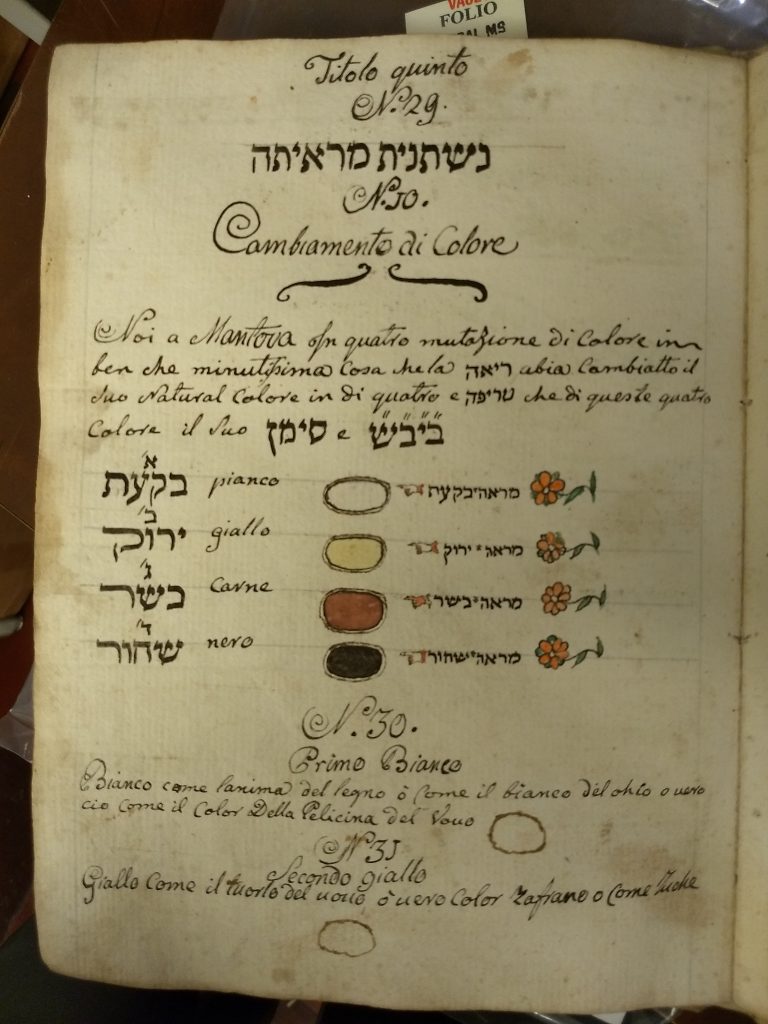 The volume was written in Italian (with some technical Hebrew terms) and illustrated by Israel David Luzzatto in Mantua around 1804.  Israel David was the uncle of Samuel David Luzzatto, who is well represented within our manuscript collection. (Many thanks to Shimon Steinmetz, who identified the connection between the two Luzzattos!)  The manuscript also includes a certificate affirming Luzzatto’s knowledge of the laws he describes.

There are many illustrations throughout the manuscript.  Some are whimsical, like the bird on the right.  Others are more practical, like a table of col

ors that identify the kashrut status of the animal based on examination of its internal organs (certain shades of black would render the animal treif, while another color, like red, would indicate that the meat was kosher and could be eaten.

Paint would have been carefully mixed to produce the correct color for the samples, as this would have been used as the exemplar for legal decisions, and so the color needed to be unfading and clear.  (The color labeled “green” in Hebrew is  correctly yellow here, as that is the color meant by the word “yarok” in the shehita literature.) This manuscript is available for use as MS General 285.