Professor Valentina Izmirlieva (Slavic Department) and I approached Rob Davis (Librarian for Russian, Eurasian & East European Studies) and Tanya Chebotarev (Bakhmeteff Archive, RBML) early last year about the possibility of mounting an exhibition on Ilia Zdanevich (1894-1975).  The Russian-Georgian Futurist poet ended up in Paris and became, under the name Iliazd, one of the most prominent figures in the book arts, designing and printing numerous projects with Picasso, Giacometti, Ernst, and Miró.  At the time, Columbia University Libraries held only a few items related to Zdanevich, but Rob and Tanya immediately agreed to investigate what could be acquired in fairly short order and managed to put together a collection that allows us to see Zdanevich from an unusual angle.

“Ilia Zdanevich: The Tbilisi Years” focuses on a crucial period in Zdanevich’s career by placing him within the vibrant community of poets, visual artists, and composers working in relatively peaceful Tbilisi (Tiflis before 1936), capital of temporarily independent Georgia, during the Russian Civil War, from late 1917 until early 1921.  Zdanevich’s most intense engagement with avant-garde zaum poetry (written in “transrational” or “transmental” language – “beyonsense”) took place in a city where multiple languages – Georgian, Armenian, Azerbaijani, Turkish, Russian, German, French, English, and Persian – could be heard.  Zdanevich composed a cycle of dramas in which sound released from sense produces equivocal meanings. Any given combination of sounds might be taken to indicate a number of possible, often contradictory, meanings – and in some cases, sounds might be heard in multiple languages at once.  In order to print the “scores” to his dramas, Zdanevich learned to set type and soon became adept at producing highly original pages.  Zdanevich, with missionary zeal, took the principles of “mature” zaum and his new typographic skills to Paris, where his hopes for zaum foundered, even as typography eventually made his reputation.

Zdanevich’s older brother Kirill (1892-1969) is represented by several items in the exhibition, including holograph letters, a carved wood-block, and a splendid gouache composition (below) of a man waving a red flag. 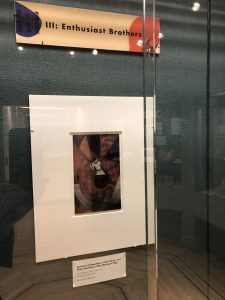 Kirill had ushered Ilia into avant-garde circles in Petersburg and Moscow before World War I and now became one of his closest associates in Tbilisi.  They were key members of 41°, perhaps the most

radical poetic and artistic circle active in Tbilisi, where Symbolists, Acmeists, and Futurists performed together and published one another in their journals. (The sole issue of their manifesto, Sorok-odin gradus–one of only two copies in North America–is depicted above).  One of the finest of Columbia’s new acquisitions in the exhibition is a 1919 anthology (below) designed and printed by Zdanevich under the 41° imprint, For Sophia Georgievna Melnikova: The Fantastic Tavern, 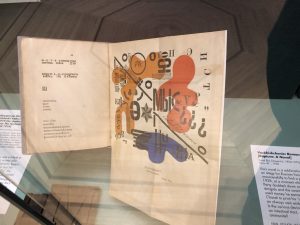 Tiflis 1917 1918 1919.  The anthology features poems, lectures, plays, and artwork in Russian, Georgian, Armenian, and zaum by the regular performers at a cabaret that anchored artistic life in Tbilisi during these years.  The dynamism of Zdanevich’s typographic illustrations can be compared with Kirill’s gouache.

As I worked with the materials Rob and Tanya assembled, I came to appreciate very much a small collection that belonged to Dmitrii Gordeev, a young art historian whose lecture on Persian influences in 16th-century Georgian frescoes appears in Zdanevich’s Melnikova anthology.  This cache of photographs, music scores, postcards, and

poetry chapbooks (depicted above), many inscribed to Gordeev, helps to embody the Fantastic Tavern community and place it squarely in an even broader network.  For those of us used to seeing Zdanevich among either the pre-war Russian Futurists of Petersburg and Moscow or the mid-century artists of Paris, this exhibition offers a refreshing view of creative life in the short-lived haven of Tbilisi, away from the world’s great capitals.

I am grateful to both Rob and Tanya for their willingness to take on the challenge of organizing an exhibition not on the basis of what Columbia University Libraries already held in its collections, but on the serendipity of what the Libraries might be able to acquire in a relatively short time frame.  For me, the unexpected opportunity to curate when the collecting was done turned out to be a gift.  I leave it to Rob and Tanya to evaluate how well this method worked from the collectors’ standpoint.