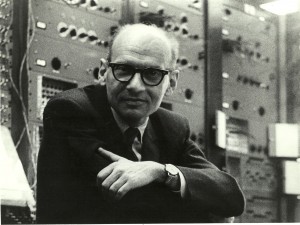 Noted American composer Milton Babbitt passed away on Saturday, January 29th.  An obituary in the New York Times is available at this link. Beyond his many accomplishments and influence as a composer, which will no doubt be covered elsewhere, Babbitt participated in the birth and the spread of electronic music in the United States and beyond, and did so right here at Columbia.

He was one of the founding directors of the Columbia-Princeton Electronic Music Center (along with fellow composers Otto Luening, Vladimir Ussachevsky, and Roger Sessions), established in 1959 to formalize and draw together many strands of electronic music research and activity at Columbia University and at Princeton, and initially funded by a grant from the Rockefeller foundation.

One of the most noteworthy pieces of equipment in the newly-established Center was the RCA Mark II synthesizer, unique at the time, which allowed programming of many parameters of the sound via binary codes punched into paper rolls. It also allowed precise specification of rhythm, a feature which attracted Babbitt greatly to the synthesizer, and it would be Babbitt who became the composer most associated with the RCA Mark II (with technical support from Center engineer Peter Mauzey). The image at the head of this post shows Babbitt in front of the RCA Mark II synthesizer (early 1960s?).

The RCA Mark II was installed at the Center, in Prentis at 125th Street, where it filled most of a room. The non-working synthesizer remains there to this day (it ceased working after a mid-1970s break-in damaged the equipment). The Center lives on today as the Columbia Computer Music Center. Pictures of the RCA Mark II, and a brief history of the Center, are available at this page on the Computer Music Center web site.

A few fascinating oral history interviews with Babbitt are available via The Video Archive of the Electroacoustic Music, including one describing his work with the RCA Mark II. There is also an interview from this source posted on YouTube, if you have any problems playing back the first source listed above.

Babbitt also provided a detailed summary of the use of the synthesizer from a composer’s perspective, in his article “An Introduction to the R.C.A. Synthesizer”, in Journal of Music Theory, 8, no. 2 (Winter, 1964): 251-265 (full text available in CLIO, see this link and navigate to vol.8 no.2).

WKCR will be broadcasting a Milton Babbit 24-hour marathon, beginning around 1am tonight and running through 1am early Wednesday morning, both over the air and streaming online. Tune in to hear some of Babbitt’s ground-breaking and influential music. You can continue your listening by browsing the recordings available in the Music & Arts Library in 701 Dodge. Try searching on keywords= Milton Babbitt , and limit your search to “music sound recordings” to exclude books and scores. You can also find some streaming audio recordings, via the Libraries’ audio databases Database of Recorded American Music (DRAM) , Naxos Music Library, and Classical Music Library. Don’t hesitate to ask Music Library staff for help if needed, either at the circulation desk, or at musiclibrary@columbia.edu.

In addition, there is some material by Babbitt contained in the archives of the Center. This material, including some musical sketches, working notes, scores, punched paper rolls used to drive the RCA Mark II synthesizer, and a small amount of correspondence and ephemera, is in the process of being transferred to the Columbia University Libraries, for preservation, proper storage, and cataloging. Some photos and information on the archives of the Columbia-Princeton Electronic Music Center are available here.