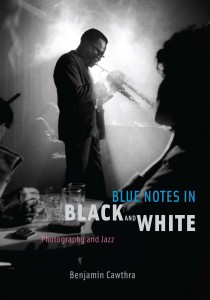 The Columbia Center for Jazz Studies presents “Blue Notes in Black and White”, a talk and book signing by author Ben Cawthra, on Thursday April 5, 2012, at 8pm, in 622 Dodge Hall. The event is free and open to the public.

“Jazz photographs are testaments to the symbolic depth and impact of African American culture in the last century. Tracing jazz photography from its rise in the 1930s to its role in the upheavals of the ’60s, Blue Notes in Black and White explores the partnership between two of the twentieth century’s most innovative art forms. Professor Cawthra’s book discussed Gjon Mili, William Gottlieb, Herman Leonard, Francis Wolff, Roy DeCarava, and William Claxton. Cawthra shows us the connections between the photographers, art directors, editors, and record producers who crafted a look for jazz that would sell magazines and albums. He also explores how the musicians shaped their public images to further their own financial and political goals.”

This title is currently available in the Music & Arts Library, under call number ML85 .C39 2011. Check it out!