The Music & Arts Library is please to host an exhibition of work by participants in the FAB-Musiconis project (French-American Bridge for Medieval Musical Iconography), led by Prof. Susan Boynton of the Music Dept. faculty, and Frédéric Billiet (Paris-Sorbonne), and involving the exchange of students from Columbia and the Sorbonne.

An opening reception for the exhibition will be held on Friday, April 14, from 6-8pm, in the Music & Arts Library, 701 Dodge. The evening will include performances of medieval music by project participants. All full-time Columbia students, faculty, and staff are welcome. Light refreshments will be served.

The exhibition will remain on view in the Music & Arts Library through early June 2017.

From the project description (for the full site, see this link):

The three-year project in collaboration with Paris-Sorbonne University centers on training graduate students in digital humanities approaches to the analysis and description of medieval images related to music, with a focus on the Musiconis database. Beginning in 2016, five graduate student medievalists from each of the two partner universities will be selected each fall to participate in a program of activities including two-week intensive exchanges in Paris and New York.

Please direct any questions about the exhibition or event to musiclibrary@columbia.edu. 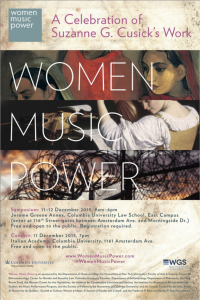 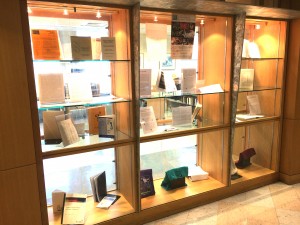 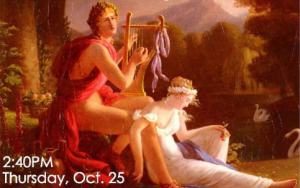 Music Dept. Prof. Susan Boynton will present a lecture titled “The Beginning of Opera in Italy”, at 2:40pm on Thursday, Oct. 25th, at the Italian Academy.  The event is free and open to the public. For RSVP and full event details, follow this link. 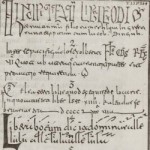 Prof. Susan Boynton, historian of medieval music, liturgy, and monasticism,  and faculty in the Music Dept., presents a lecture titled “The Visigothic Script in the Age of Print: Politics and the History of Paleography“, on  Thursday, 9/20, from 6 – 7:30 pm, as part of the “Book History Colloquium“, presented by the Rare Book and Manuscript Library.

For further details on the event and on the series, see the home page of the Book History Colloquium.

The Center for Jazz Studies presents Prof. Kevin Fellezs, giving a talk titled “Vital Transformations: Fusion’s Young Discontents”, on the early history of fusion music and its relation to jazz. For full details, see this link.

The event is free and is open to the public.

The Computer Music Center at Columbia University presents a week of lectures, concerts, and workshops, “Ghost in the Instrument: Aspects of Musical Research and Composition“. The event is on the occasion of the 10th anniversary of the PRISMA International Forum. All events are FREE and open to the public (registration is required for the software workshop).

On Friday 3/23 and Saturday 3/24, concerts will take place at Prentis Hall and at Miller Theater. There will be a workshop on PWGL software on Sunday 3/25 (registration is required). For full details on the programme, please see the web site for the festival, at http://music.columbia.edu/cmc/musicalinteractivityfestival/Programme.html. The schedule for performances is at http://music.columbia.edu/cmc/musicalinteractivityfestival/Performances.html.

“Art of the States” is an interesting website, showcasing American composers and performers, and providing streaming audio (in RealPlayer format) of many works. You can search by composer, performer, instrumentation, time period, or genre. There is also an extensive list of links related to composers, performers, labels, and publishers (it is somewhat buried, under “About Art of the States>>Resources”).

The site also offers some interesting feature presentations, which cover some aspect of music in the collection. For example, the most recent feature offers composer John Harbinson providing an overview of his String Quartet No.3. This item dates from May 2008, so it appears that updates are infrequent. RSS feeds are offered on the website, allowing users to subscribe and be notified with updates when new content is added to the site (for a good intro to using RSS feeds, see this link).

One feature of interest to composers and performers is that the site accepts submissions, for inclusion on the website, and for distribution via broadcast radio networks. Note that Music Dept. faculty Fred Lerdahl and Arthur Kampela have works included on the site. Take a listen!

Music faculty member George Lewis has work on display (audition?) at the Studio Museum in Harlem. The piece is titled “Travelogue”, and runs through March 15, 2009. Check it out – details are here!

Lewis’s Travelogue is designed to create an environment that is influenced by the Studio Museum’s native sounds. It is not music so much as a sound composition. The sonic scenes do not impose, but blend and harmonize with the listener’s space. Travelogue is the work of an artist whose most famous creation was powered by programming and ideas of digital subjectivity turning his creative eye to simplicity, and producing something of wondrous complexity.

Prof. George Lewis, the Edwin H. Case Professor of American Music, and Director, The Center for Jazz Studies at Columbia University, has a new book out: “A Power Stronger Than Itself: The AACM and American Experimental Music” (University of Chicago Press, 2008). The book is available in CLIO under call number ML3508.8 C5 L48 2008. Check it out!