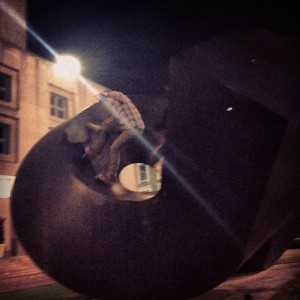 The image you see here was published a few months ago on the BWOG, Columbia’s student-run campus news site. Although the caption suggests that their editorial group appreciated the skateboarder’s midnight riding skills (“color us impressed”), in fact this kind of activity on a public outdoor sculpture is one of the worst things that can happen to the work of art itself. Sculptures in stone and metal naturally suffer from the elements of nature, from acid rain to guano, but they also suffer a great deal from the acts of humans. This ranges from the unconscious touching of sculptures, leaving oil residue that erodes the surface, or outright vandalism and abuse of the works of art themselves. Skateboarding on Clement Meadmore’s Curl clearly is an example of this latter abuse. This sculpture has been interpreted as many things, but the one thing that can be confirmed is that it is NOT a skateboard ramp!

This abstract sculpture was the first commission for a public outdoor monumental sculpture that Clement Meadmore (1929-2005) received. Born in Australia, where he received his artistic training, Meadmore emigrated to the United States where he was influenced by Abstract Expressionism, Minimalism, and the improvisational sounds of jazz music. He began experimenting with Cor-Ten steel, and developed his signature fluid geometric sculptures that belie the industrial materiality of the metal with which they are made. Meadmore received this commission from businessman and philanthropist Percy Uris in 1967. The sculpture was installed at the Morningside Campus a year later as a gift from Uris to decorate the lawn of the new Business School building, which he had endowed. This sculpture made Meadmore’s international reputation, and he went on to receive numerous other commissions for public outdoor sculptures from universities, businesses, and cities around the world.

The natural degradation of the paint on the Cor-Ten steel has, unfortunately, made the Curl look less desirable today as it once did. However, a Task Force has been formed to address the concerns of this sculpture and to make recommendations for ways in which Meadmore’s first major work of art can be properly preserved and restored to its original glory. Stay tuned for more information about this.

And, as a reminder, please don’t ride skateboards on the sculpture!

3 thoughts on “Abuse and Preservation of Public Outdoor Sculpture”