When looking at books produced in the early modern period, it seems that every book has a different story to tell.  Each book produced during the hand-press era contains unique information about the people who created, bound, bought, sold, and censored them.  In many cases, that data is the only remainder of the existence of a person who didn’t make it into the annals of history. 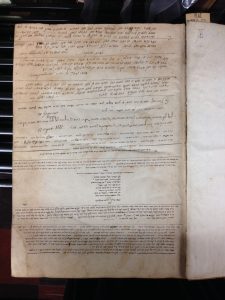 Births and deaths in the Almanzi famly

It is this concept which animates Footprints: Jewish Books Through Time and Place, a collaborative digital project that collects data from Jewish books printed from the 15th through the 18th centuries.  Moving constantly due to persecution and expulsion, Jews often were not able retain local archives, but instead noted important information in their books.  A prayer book printed in Venice in 1599, for example, contains a genealogical listing of three generations of the Almanzi family of Padua, begun by the patriarch Barukh, and completed by his son Giuseppe after his father’s death.

Footprints is a collaborative project between co-directors at Columbia, the Jewish Theological Seminary, the University of Pittsburgh, and Stony Brook University. The project in turn partners with institutions and collections around the world to collect data from early printed Jewish books in all languages (Hebrew, Yiddish, Ladino, Judeo-Arabic, Italian, etc.), telling stories that span the globe. 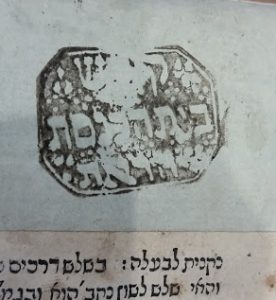 Ownership stamp from the synagogue in Herat

The database includes nearly 10,000 records, for books that traveled to nearly every world area.  Nearly 300 records describe books in Spain, and document the dissolution of the monasteries and the subsequent absorption of their books into national collections. At least two volumes have been identified with a stamp from the synagogue in Herat, Afghanistan.  Other notable locations where Jewish books have been include Calcutta, Sana’a (Yemen), and Krakow, to name just a few.

Footprints’ efforts have already born fruit, identifying a book listed as missing since World War II, detailing the transfer of important historical collections, and even virtually reuniting a family across generations. The database has been used in the classroom as part of a course on the history of the Jewish book, and in additional courses encouraging students to think about the materiality of the text. The Center for Teaching and Learning supports technical development of the project, and their many creative innovations (including a forthcoming mapping feature) have been essential to the project’s success. A current technical collaboration with the DICTA project will significantly enhance the search function in Footprints, and we look forward to more collaborations, both for technical development and for data collection.

In order to better decipher inscriptions in books, Footprints has begun a series of workshops training contributors in early modern Hebrew paleography.  While medieval Hebrew paleography is taught regularly in England and Israel, there has never been a course focused on Hebrew scripts from 1500-1800, so this was also of great benefit to students and faculty working in this area more broadly.  The first workshop, focusing on Hebrew hands from Central and Northern Europe, took place just this week, and was a great success.  There are many more plans in place for the project, which just celebrated its fifth anniversary, and we look forward to where it might go in the next five (and ten, and fifty) years to come.