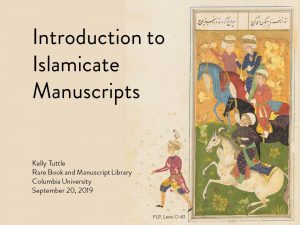 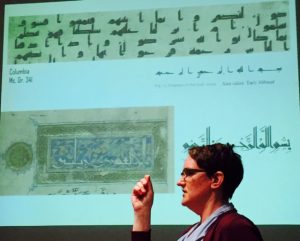 On September 20th, sixteen students, along with a number of faculty members and librarians, gathered in the Chang Seminar Room of RBML to attend a full-day workshop on codicology led by Dr. Kelly Tuttle, the Muslim World Manuscript (MWM) Project Cataloger at UPenn. The workshop was supported by the Center for the Study of Muslim Societies (CSMS), and is a  part of a series of scholarly events and engagement activities around the ongoing MWM. (Check out the catalog of the digitized and cataloged manuscripts from the MWM project here and here.)

The aim of the workshop was “to give students a grounding in how to describe the material aspects of Islamicate manuscripts and to prepare students to identify key bibliographic features so that they may more confidently go to repositories and study manuscripts in person.” The day was full of hushed, intense discussions, with heads moving back and forth between the beautiful slides Kelly projected on the screen and the pages of the various manuscripts put in front of the students, who often worked in pairs on the numerous hands-on exercises Kelly had prepared. 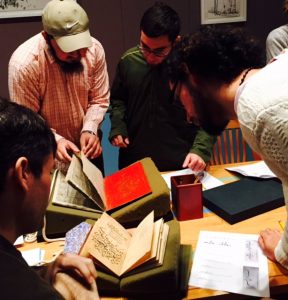 Kelly  guided the students through the various components and aspects of these manuscripts “from the very outside to the inside,” beginning with safe handling measures, and then going over covers, spines, boards, fly-leaves, the nature of support (paper or parchment, types of paper, watermarks), collation, quires, bindings, common types of scripts, decoration and layouts, including traditional locations and styles of recording authors, titles, and dates in Islamicate manuscripts. She went into detail about the various types of notes that manuscripts can include and how the layout of the page and other material features (including the different colors of ink, the use of different scripts or locations for writing, etc.) can indicate the type of discourse written down (e.g. poetry vs sharh) or the nature and goal of the inscriptions (e.g. marginalia by different authors written in different directions that indicate different sources, authors, etc.). Students could see in a clear, simple and organic way how form and content work hand in hand in material culture, to great communicative and functional effects. 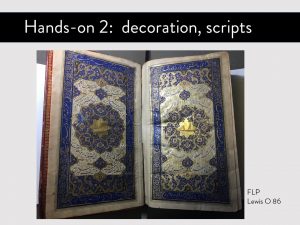 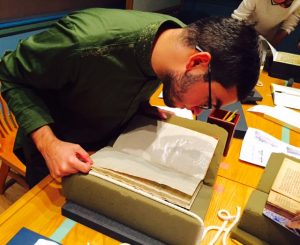 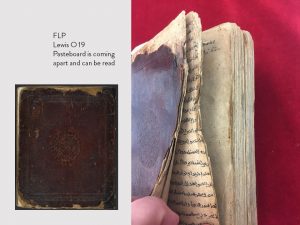 Throughout, students exchanged tips, background knowledge, and questions, and one could see very clearly in their eyes how the Muslim World Manuscript collection was coming to life. Curiosity, cell phones to take photos, zoom in on any given detail, but also laughter and humor, and an increasing level of confidence and comfort marked the day.

The day wound down with an exercise in which students gathered together what they had learned, filling in a template to describe a manuscript as thoroughly as they could and applied some of the best practices and recommendations from the workshop. They then presented their findings to the group and spoke about what they found most interesting in the manuscript they were responsible for presenting, and about the learning process throughout the day. 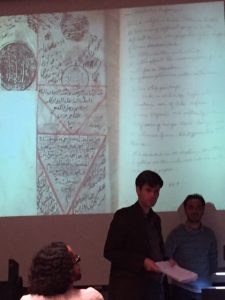 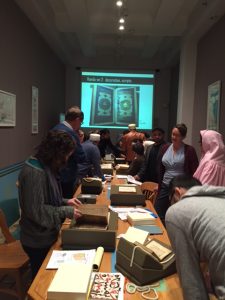 The next day, some of the students wrote to thank Kelly, the Libraries and the Center for the Study of Muslim Societies, and to express the wish for further hands-on opportunities to familiarize themselves with the material culture of the Islamicate world, stressing how important such opportunities are for their learning and graduate studies. Navid Zarrinnal,  a fifth-year PhD candidate in the Department of Middle Eastern, South Asian, and African Studies, currently working  on Persian and Iranian intellectual history, wrote: “Friday’s workshop prepared us for a central task of our scholarship, rarely offered in the classroom, namely the discovery and deciphering of previously unedited manuscripts. We learned to locate a manuscript in the context of its intellectual and scholarly history by deciphering key information, such as author, title, summary of contents, and genre. In anticipation of future research, the workshop also prepared us for reading hard-to-decipher manuscripts. I applaud the Muslim World Manuscript Project’s efforts and encourage similar training for the future.”

Shabbir Abbas, a graduate student at MEASAS who focuses on the development of the Shi’i Imami school of jurisprudence in his work, also stressed the interactive nature of the workshop, and how he benefited from the various exercises and discussions throughout the day: “The codicology workshop was beneficial in the sense that I was able to focus for the first time on the physical and artistic/aesthetic aspects of the manuscripts instead of my typical textual analysis. Likewise, interacting [and even debating] with other grad students and scholars coming from different perspectives on the topic of manuscripts was an invaluable experience.”

Seher Agarwala, PhD student in the South Asian Art and Architecture department, who is working on Indo-Persian manuscripts and illuminations,  also wrote to say that “workshops like this would really benefit graduate and even undergraduate history students. We usually work from secondary sources, translations or photocopies so getting a real sense of manuscripts as objects, being acquainted with their idiosyncrasies and specific features and trajectories, their uniqueness,  and getting a chance to form one’s conclusions and opinions based on that encounter is extremely beneficial, and a real eye opener. My research would have taken a completely different trajectory, had I been acquainted with manuscripts earlier on in my studies.” Seher said she was delighted to work with a manuscript of Yuusuf and Zuleikha from  Qissas al-anbiya, The Stories of the Prophets, and the image of Zuleykha seducing Yuusuf in a courtyard, rather than in an enclosed setting, as the scene is usually depicted, stands out in her mind “as something worth returning to, and studying. Had I not been part of this workshop, I am not sure I would have been aware of this variation on the story, and been enticed to  take a closer look at some of the common assumptions around this story “.

After the workshop, I sat down with Kelly and asked her a few quick questions: 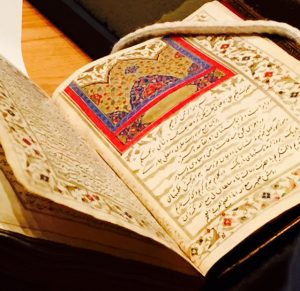 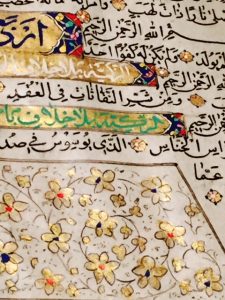 How did the idea of organizing this workshop come about? What was your initial motivation in proposing it? I remember my first attempt to work directly with manuscripts. I focused so much on the text that I missed many details and aspects of the history of the material objects I was consulting and that were clearly marked all over them, but that I did not register. After I returned, I realized that not only had I pretty much ignored the materiality of the manuscripts, I also didn’t even know what exactly I should have been looking for, or taking note of, or photographing for later research. It was frustrating. I immediately tried to find a class on Islamic codicology to take, so that next time I went to do research, I’d be better prepared.

That’s exactly what I wanted for the students here: for them to feel more familiar when they go do their own primary source research with manuscripts. Since we are all working to make Columbia’s Islamicate manuscript collection better known through the CLIR-funded Muslim World Manuscripts project, it seemed like a good time to provide an introductory course. My hope is that the students who take the workshop will have a better framework to do research with Islamicate manuscripts, and to think about the manuscripts as material objects with their own stories, their own “presence” and peculiarities, and not simply as “holders of a text”, but as objects in their own right. 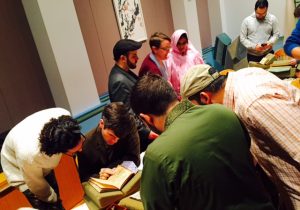 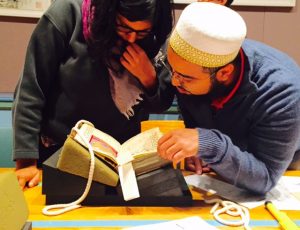 How did you prepare for the workshop? What resources did you consult?  When and how did you take the beautiful photos you featured on the sldies? How did you choose the items you are focusing on?

In preparing, I thought mostly about what kind of information I pull out when cataloging manuscripts. The level of descriptive detail that goes into cataloging is also very useful and relevant for research about manuscripts. When I found good examples that illustrated a feature, an aspect of manuscripts which I thought students should know about, I either took photographs myself, if the manuscript hadn’t yet been digitized for the project, or I took one of the digital images that are available on OPenn. As for the hands-on portions of the workshop, I tried to pick items that highlighted specific aspects we had focused on or introduced in my presentation. I also tried to choose items that I thought would be instructive for the students to look at holistically and in greater detail during the final hands-on session. I limited the focus of the workshop to what I thought were the essential elements for a basic understanding of a manuscript.. Since the workshop was only one day, we barely scratched the surface of many of those topics, as you can probably imagine. I hope that the students now have at least a sense of what features to look for and how to describe them. They also came away with a reference sheet of sources where they can go for further guidance. 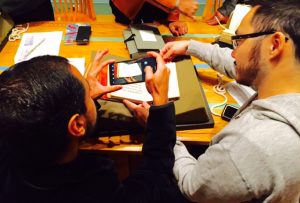 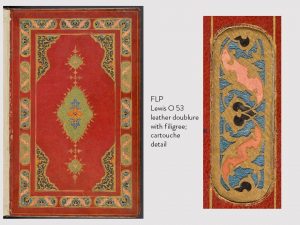 What was your impression of the students, of the level of interest and attendance? Did any of their questions surprise or intrigue you?

I was quite happy with the variety of backgrounds and experience that came into the workshop. The students had different levels of interaction and familiarity with manuscript culture. Some had worked with the MWM project, doing basic cataloging; some had used manuscripts in their own research, some had even worked on the production side of manuscripts, copying some works, and some had almost no experience with manuscripts. What I most enjoyed about the students, though, was their willingness to share their observations and suggestions. They asked each other for help, they circulated during the hands-on sessions to look at everyone else’s manuscripts and discuss manuscripts that were not assigned to them, they tossed around ideas and observations throughout the day. There was a sense of openness and experimentation. The experience was valuable, for me; I hope it was for them as well. 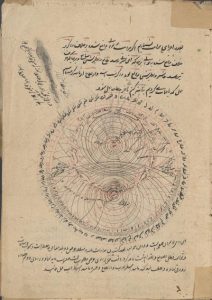 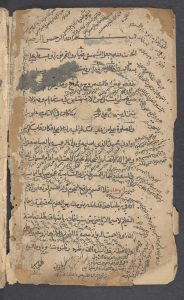 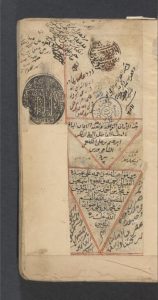 What type of workshops would you like to offer in the future? Are there any aspects of the project you would like to be more involved in, or see further developed?

I think it would be nice if someone from Art History offered a workshop on Islamicate manuscript illustration, including Perso-Indian. Actually, if someone were to offer a workshop on Perso-Indian manuscripts in general, that would be of real value! If there is interest, a workshop could be developed to delve more fully into manuscript construction, common types of damage and repair, perhaps taught by someone from conservation. With careful selecting, an excellent workshop could be developed to help students understand manuscript notes better, the uses to which they can be put for research, and the basics of provenance research, establishing names, and finding people in biographical dictionaries and other sources. 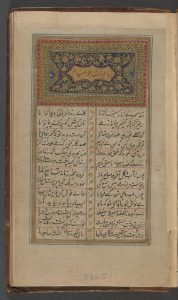 Thank you, Kelly! Many thanks to all who made this workshop possible!

One thought on “The Muslim World Manuscript Project: A Codicology Workshop”