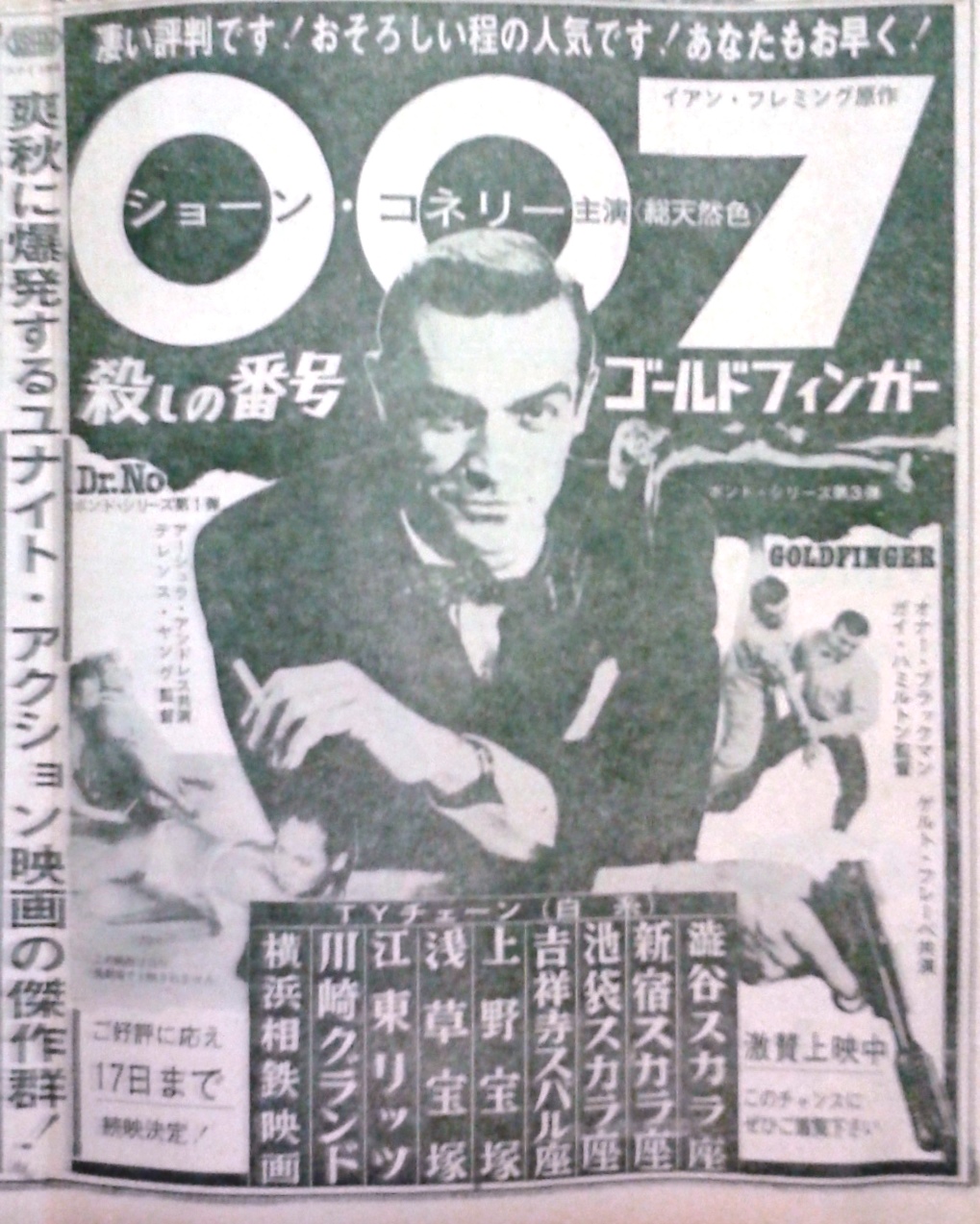 A newspaper advertisement for a British film from September 1965. GOLDFINGER, directed by Guy Hamilton

So, as we’ve established, film fliers are ephemeral. Unless they happened to end up in the hands of collectors, they are supposed to be discarded after being distributed in conjunction with a film’s release. However, there is more ephemeral media than just film fliers: film advertisements within newspapers, for example, when a film is brought to the public, a variety of promotional methods could be used. Newspaper advertising is one of the traditional methods to promote films among a broad range of audiences.

Newspapers report up-to-date news and information. After reading through a paper, most often, we immediately discard it. The advertisements are a sub-content of the paper, but can be more significant, for example, especially when a full page is designated for it. The newspaper’s nature, immediacy of information makes film advertisements in it a lot different from the contents of regular film fliers.

With this in mind, we will look at some interesting newspaper film advertisements from the Makino Collection. 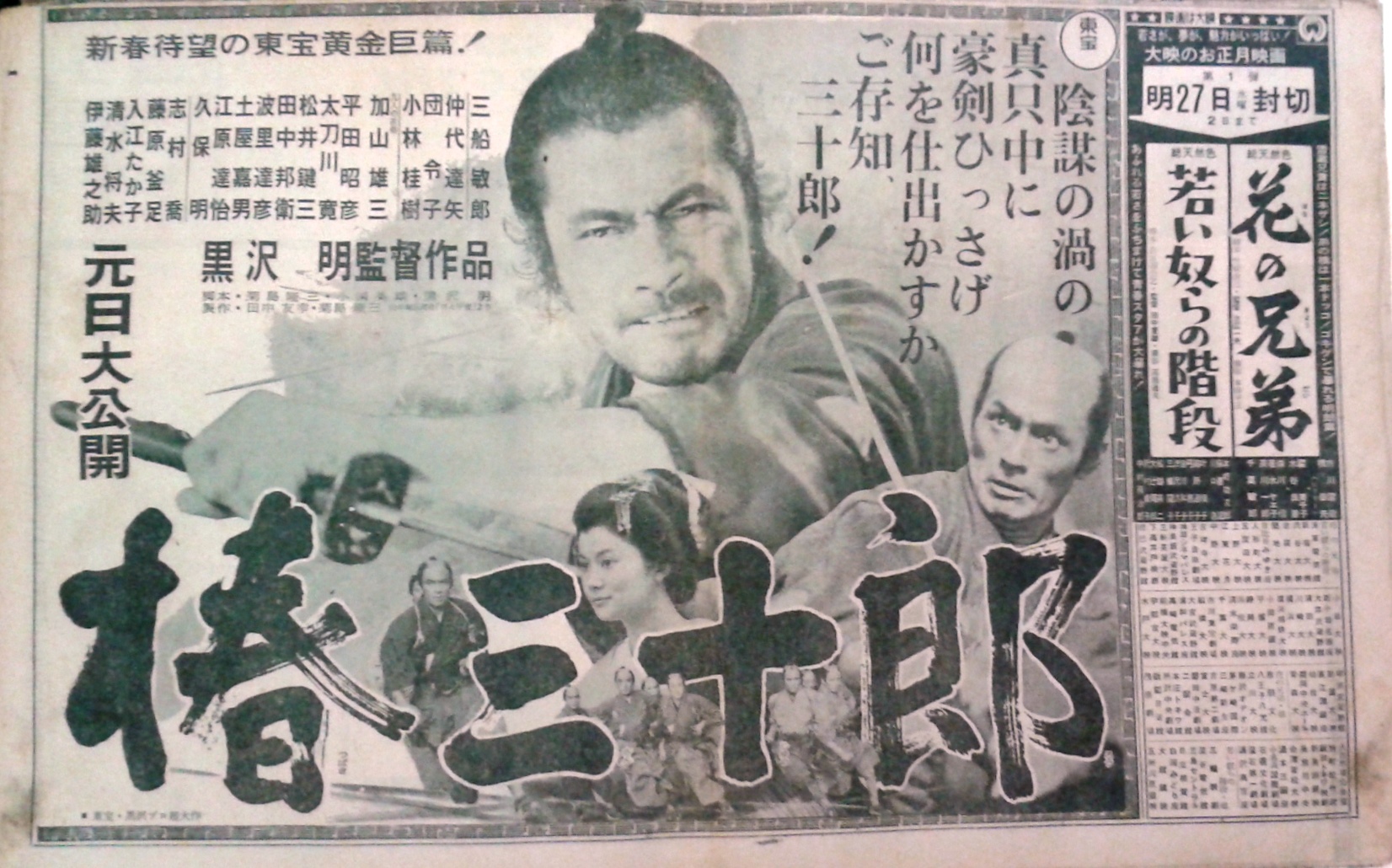 Newspaper advertisements are different because they include not only film images, but also fresh eye-catching copy, which cannot be seen in typical film ephemera. Since newspapers are not meant to be preserved over time, the contents of newspaper advertisements need to be up-to-date, fresh and entertaining. The big difference, which is also the most entertaining thing about them, is that film advertisements will be flashy, appealing, and include funny slogans with weird wording, in contrast with the more polished look of film fliers, which usually features an elaborate design.

A newspaper advertising for an American musical film from an unknown Japanese newspaper, September 1965. MY FAIR LADY, directed by George Cukor

The mission of newspaper film advertisement is to instantly attract readers to movie theaters. Therefore, the small section of newspaper needs to be extremely appealing. Thus, the contents vividly reflect the box office success of a film, and will often announce a second-chance for viewer’s to see an extended film’s run.

“If you have already watched it, you should feel the deep emotion again–” (My Fair Lady, 1965)

As a result, this promotional information in newspaper advertisements compels newspaper readers to go to movie theaters.

Since most films are generally released on Saturdays in Japan, the paper’s evening edition on Fridays is usually full of movie advertising. The advertising sections on Saturday and Sunday are full of eye-candy for film fans as well. 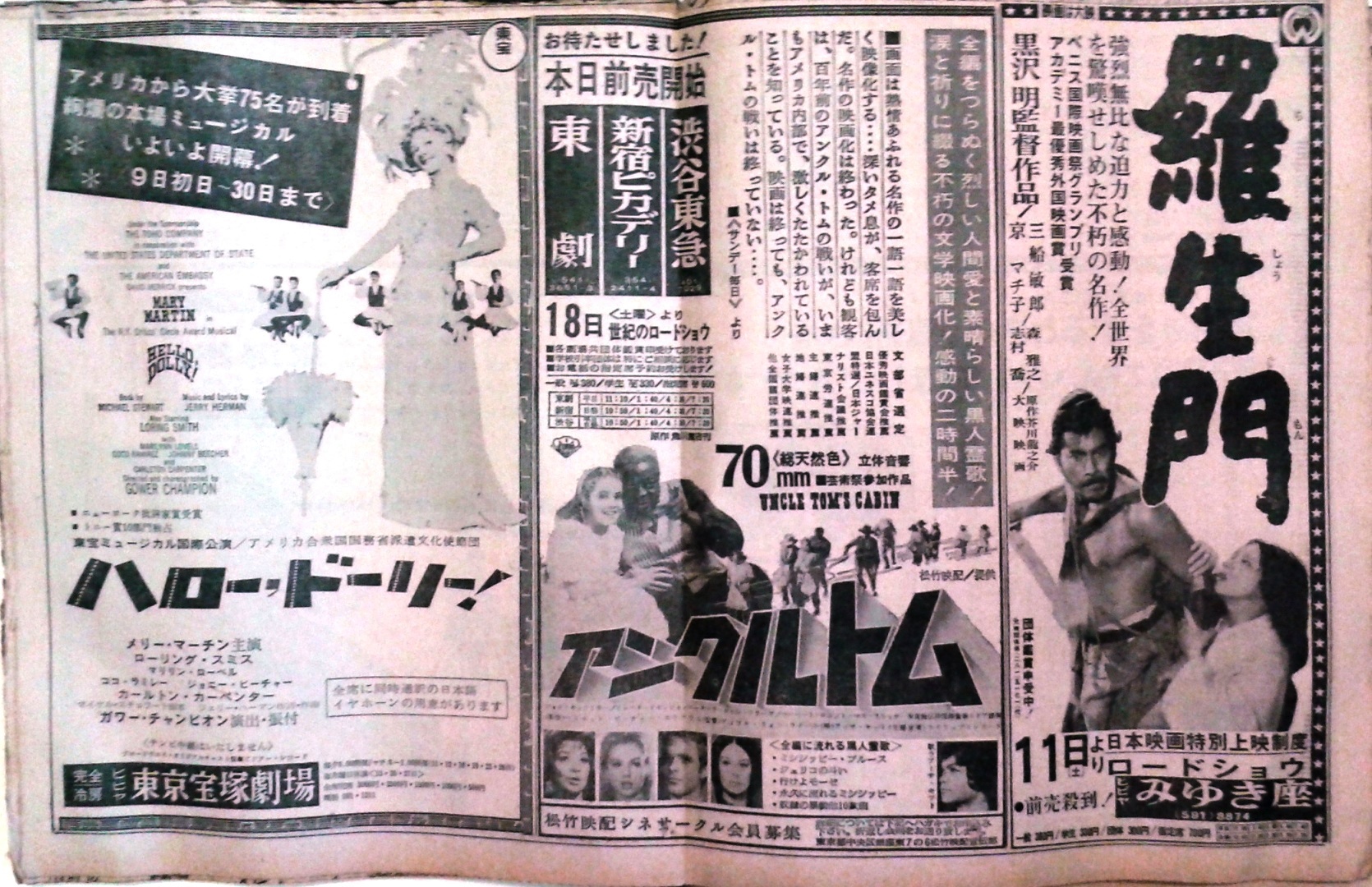 An advertising from an unknown newspaper for some films and theater from September 1965. From the left, a Broadway musical sponsored by Tōhō, HELLO DOLLEY; UNCLE TOMS’ CABIN (Shōchiku-eihai); RASHŌMON (daiei)

What is the status of newspapers in Japan? To what extent can these film advertisements influence readers in Japan?

Newspaper advertising is a true expression of a culture of one country, a life record; it is a precious record of economic evolution history and cultural history.

For people living in Japan, home newspaper subscription is an old tradition.
There are five main national newspapers in Japan: Asahi, Mainichi, Sankei, Yomiuri, and Nikkei. They are printed twice a day and in several local editions (The edition of Japanese newspapers that can be obtained in the U.S. is an international edition).

The influence of newspaper is proportionate to the subscription numbers. One of the national papers in Japan, the oldest paper, Yomiuri Shimbun, was founded in 1874. The Yomiuri reached 12.77 million (figure: Audit Bureau of Circulation- Japan) combining morning and evening editions for the first half 2014, and is credited with having the largest newspaper circulation in the world. In comparison, the top U.S. newspaper, the Wall Street Journal circulated 2.38 million copies in 2013 (Alliance for Audit Media); this number includes 0.9 million digital editions. Since the population in Japan is 126.9 million and the U.S.’s is 321.4 million (The U.S. Central Intelligence Agency, 2015 est.), you can infer how much a dairy newspaper influences Japan. 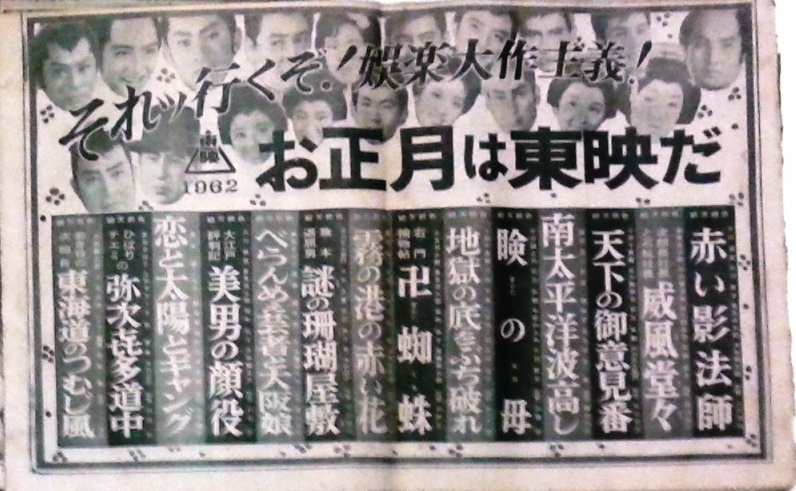 An advertisement from an unknown newspaper for Japanese film: Tōei film line-ups, from Dec 1961. “Let’s go! The doctrine of only-entertaining films! Your New Year must be with Toei”

If you visit Japan and use public transportation during rush hour, you will witness a number of businesspersons reading newspapers on trains, buses, and on the subway during their commute. It is an ordinary scene in a Japanese morning.

In the 1960’s and 70’s, newspapers in Japan developed dramatically. In the midst of the Japanese Post-War Economic Miracle, people sought and craved a better lifestyle. For this reason, newspapers soon became a major part of people’s daily life. The competition among national papers was brisk. The 1960’s was also called cinema’s golden era; the culture of film advertisement in newspapers came into full bloom as an effect of this era. 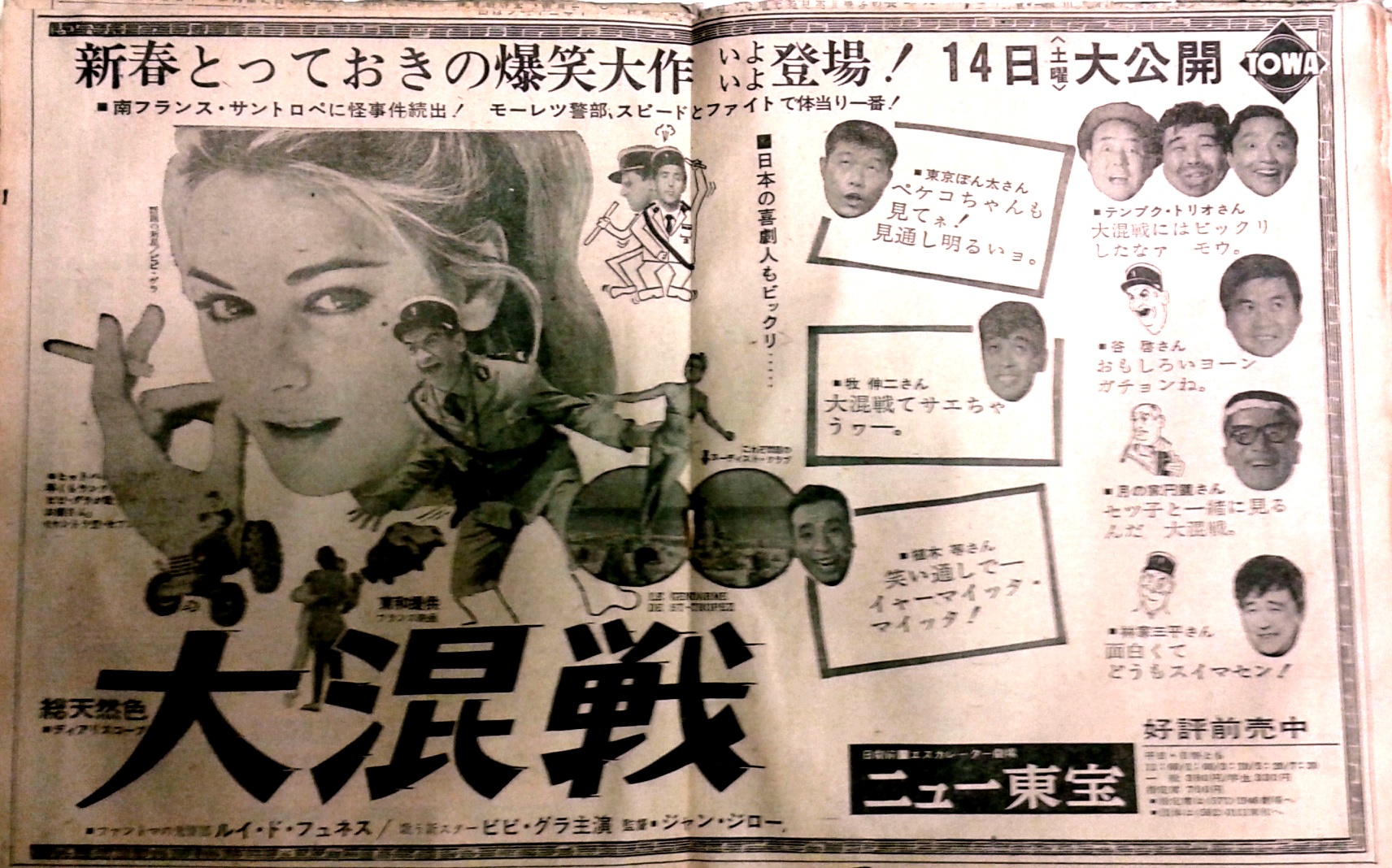 An advertisement from an unknown newspaper for a French comedy film from January 1967, alongside Japanese comedians’ comments, their photos, and their one-line jokes. “This film stunned all Japanese comedians…” Le gendarme de Saint-Tropez/The Troops of St. Tropez, directed by Jean Girault

The Makino Collection includes a number of newspapers, including the film advertisements from the 1960’s in neat scrapbooks, the golden era of cinema in Japan and newspaper as a medium itself. They are extremely precious, and highly worth looking at. Not many people collect this very ephemeral object, since it requires time and effort to preserve them properly. Therefore, you will greatly appreciate this specific form of film advertising within the Makino Collection.