A powerful logo on some pieces of ephemera immediately caught my attention. The logo, “アートシアター (Āto shiatā/Art Theatre)” or “atg” in its impressive design, stands for Art Theatre Guild (ATG), a film distribution company, founded in 1961. The company built up the foundation of today’s avant-garde film distribution in Japan, and literally made it a home for art films of that period. ATG’s activities made the Japanese people one of the few audiences in the world who intensely appreciated films from outside their own production countries.

In 1928, Tōwa Shōji (later Tōwa Eiga/Tōhō Tōwa) was established by Nagamasa Kawakita in order to import quality foreign films to Japan. He became a well-known pioneer and entrepreneur of international film, as well as an importer/distributor in Japan. He and his wife, Kashiko Kawakita, strived to bring foreign films into Japan. The first film they imported was a German film, Leontine Sagan‘s Girls in Uniform/Mädchen in Uniform (1931).

Kashiko formed Nihon Ārt Shiata Undō no Kai (literally, Japan Art Theatre Movement Party), aiming to establish theaters for showing art films. Art Theatre Guild (ATG) was established shortly thereafter in 1961 as an independent film theater/art house for the purpose of producing and distributing innovative, quality avant-garde art and non-commercial hidden films both inside and outside Japan, the kind of film that was not shown at major film theaters. This independent film company and its distributed films left a great impact on the Japanese film industry. (Interesting fact: ATG’s title and logo designs were made by the filmmaker Jῡzō Itami (1933-1997), who is known for his much acclaimed work, Tampopo, and was also an industrial designer.)

The major Japanese film studio, Tōhō, advocated for the ATG mission and sponsored them as a main investor, also offering their theaters as an experimental screening place for art films, including Nichigeki Bunka Gekijō, a film theater, which later became an ATG specialized “Art Theatre”. 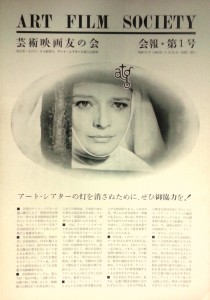 We have long suffered from sadness and sorrow that highly received art films in the world were not imported to Japan, and that we have missed such a great opportunity to appreciate masterpieces. The Art Theater is a precious experimental theater [for art films] that will grant our wish.

(From the cover of the Polish film Mother Joan of the Angels, directed by Jerzy Kawalerowicz, the first ATG film distribution: Art Film Society no.1, ATG members’ bulletin issued by Nichigeki Bunka Gekijō, 1962)

ATG published a film magazine alongside their film distribution. These serial magazines, which functioned as a kind of film program, expanded the regular content of film programs at the time, including film critique and highlighting a film scenario, among many other contents. In these film magazines, prominent film critics such as Nagaharu Yodogawa and Tadao Satō authored a series of articles.

Seeing is believing; please have a look at some of the ATG film line-ups promoted on the ephemera of the company’s earlier years (1961-1967), including both Japanese and international films. ATG’s fliers and programs completely reflected the goal of their film distribution, bringing quality art films to the public. Distributed with each new film, they were not uniform in any way: the shape, color, and contents were unique — and gorgeous. If you come upon these film fliers and programs from ATG, they might strike you as ephemera from an art event.

ATG’s line-up of distributed films and filmmakers, their forms of film promotion, and their method of educating their audience were unconventional at the time. Amid the flourishing of Western blockbuster films, their films began to be well-received among audiences, and art films were well-recognized within Japanese film society. At the same time, ATG brought a new kind of film ephemera to the world, as much of their film line-up brought a new wave to the Japanese film industry.

It is said that ATG’s activities can be roughly divided into three stages. After the earlier period (1961 – 1967) of promoting art films inside and outside Japan, ATG’s activity shifted to the second period (1967-1979), assisting low-budget independent films with half of the production costs. In this period, according to Kuzui Kinshirō, film producer/General Manager at one of the main ATG theatres, Art Theatre Shinjuku, “ATG got rid of foreign films. They staked their fate on Japanese films and tried to find a way forward” (1977). ATG’s quota of Western films during this time was much reduced from the first period. After the box office failure of independent films, ATG’s third period (1979-1992) was weaker, and the company finally stopped all activity.

This film company has inspired a huge movement bringing hidden noncommercial masterpieces and minor avant-garde filmmakers to light, and its achievements are still highly acclaimed. To showcase ATG’s uniqueness, in 2012 through 2013, the New York Museum of Modern Art and the Japan Foundation held the first large-scale film screening/exhibition of ATG in the United States: Art Theater Guild and Japanese Underground Cinema, 1960–1986, in conjunction with a gallery exhibition, Tokyo 1955–1970: A New Avant-Garde. This ATG special event later traveled to the Harvard Film Archives and UC Berkeley Art Museum and Pacific Film Archives. The films drew lots of attention not only from connoisseurs but also regular moviegoers.

ATG no longer exists. However, the ephemera in the Makino Collection vividly exhibit what it once was. The films that ATG brought to the world will never stop attracting audiences even decades from now.