Among the many collections of personal papers held at The Burke, there is a small cache of materials belonging to Biblical geographer Lewis Bayles Paton and his first wife, Suvia Davison Paton. The Patons traveled throughout the Middle East in the early 20th century and Lewis led the American School for Oriental Study and Research in Palestine (based in Jerusalem) from 1903-1904. I was particularly interested in the documents written by Suvia Davison Paton, as they are mostly personal correspondence and diaries from her travels in Europe and the Middle East. Such travel accounts are invaluable in helping historians reconstruct Americans’ experiences abroad over 100 years ago but they are also poignant since they record how places change over time and how they remain the same despite the passage of many decades. Below are some anecdotes from the letters and diaries of Lewis and Suvia that really resonated with me. They offer a window into the lives of intrepid theologians and travelers in the early 20th century. 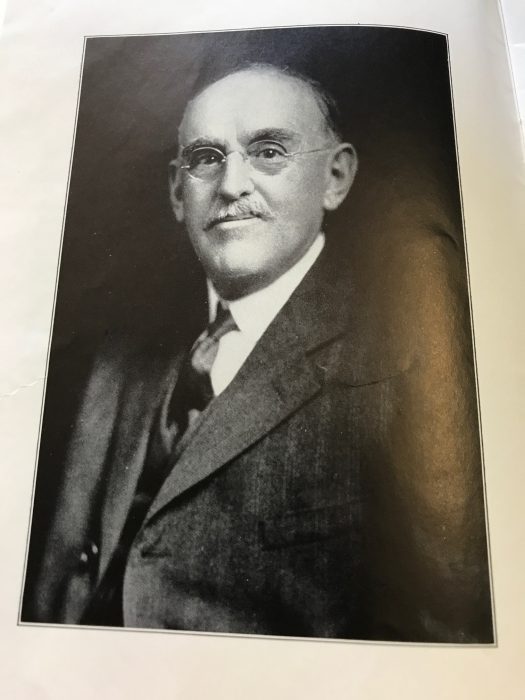 Suvia’s description of a June 1890 visit to the Blue Grotto at Italy’s island of Capri is remarkably similar to the experience of a 21st century traveler on the island. Suvia and her husband visited Capri from Naples, traveling by ferry the 26 miles from the mainland to the island. “We were taken to the blue grotto first & left the steamer in row boats to enter the grotto as it is only 3 ft. high at the entrance. Everyone was obliged to get down in the bottom of the boat as we passed through the grotto but the grotto is 40 or 50 ft. high in the centre. A dozen boats were in it at the same time as all the passengers entered the cave & only 3 are allowed in one boat beside the boatman.”

Some years later, in the early 20th century, while they visited Venice, Italy, Lewis and Suvia attended Sunday morning mass at the Scotch Presbyterian church and she describes a quaint, intimate service: “About 40 people were present. The Scotch minister and his wife are earnest people & very pleasant. Afterwards there was a communion service to which we were all invited. 25 remained. The minister passed the one silver goblet of wine & a small plate of bread. It was a simple but impressive service which we all enjoyed. It reminded us of the gathering of the disciples in an upper chamber.”

When Lewis and Suvia journeyed to the Middle East in June 1903 so Lewis could continue his studies and lead the American School for Oriental Study and Research in Palestine, they landed first in Beirut. Geopolitics have changed significantly since the Patons’ arrival, as both Lewis and Suvia describe Beirut as being a city in Syria. Lebanon didn’t even exist as an independent nation! The Patons spent time in Damascus, Beirut, Smyrna, Palestine, and Egypt, visiting ancient sites like Jericho, the Sea of Galilee, and the Cedars of Lebanon. 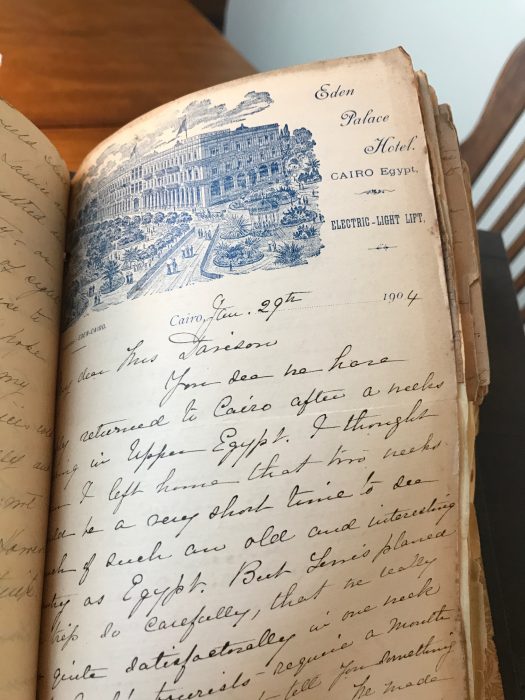 A letter from Lewis to his mother-in-law from Cairo in January 1904. Their hotel boasted electricity and an elevator! 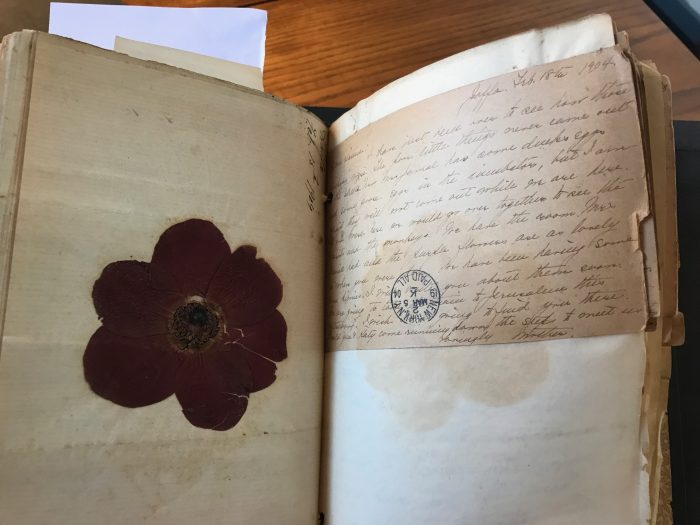 A flower collected and pressed by Suvia in Haifa in February 1904.

According to Lewis’ Report of the Director, 1903-04, written for the Managing Committee of the American School of Archaeology in Palestine (which included representatives from both Union Theological Seminary and Columbia University), his own studies were “devoted chiefly to the topography of ancient Jerusalem. I investigated all the archaeological remains that were accessible, and obtained a large collection of excellent photographs. …At the request of the Trustees of Hartford Theological Seminary [where Paton taught] I took advantage of my residence in Jerusalem and my trips to other parts of the country to make a quite complete collection of objects illustrating the life of the Bedawins and of the Fellahin. This collection is now on exhibition in the Museum of Hartford Theological Seminary, where it is open to the inspection of the public.” One wonders where these artifacts are today!

Lewis and Suvia led a very full life during their time in Jerusalem, participating in archaeological excavations and socializing with other scholars and diplomats residing in the region in this period. Tragedy struck in March 1904 when Suvia fell off the horse she was riding near Amman, Jordan and died shortly after, never regaining consciousness. Lewis touchingly records the incident in his report to the Managing Committee:

“Late in the spring, just before the end of the School year, we planned a tour in company of Dr. Masterman of Jerusalem, to make a more thorough study of ‘Araq el-Amir, then to visit Amman, Jerash, Pella, the Decapolis, and to return by way of Beisan and Nablus. We had gone as far as Amman, and were just starting on the road to Jerash. It was a cool, cloudy morning, and we were riding slowly over a level, grassy spot, when suddenly, without any warning, and without uttering a cry, Mrs. Paton fell from her horse. Her head struck on a sharp stone, and she never regained consciousness. We were able to move her to the Amman station on the new pilgrimage railway from Damascus to Mecca, and to take her in a train to Damascus. She died on the train within two hours of Damascus, and I was obliged to bury her body in Damascus. She was the constant companion of my travels, and whatever success may have attended the work of the School during the past winter is due to her enthusiasm and brave willingness to put up with the inconveniences of life in Palestine.”

It must have been so shocking and so awful for everyone involved, particularly Lewis, to have lost his beloved young wife suddenly and unexpectedly. Their young daughter had already gone back to the United States several months earlier but one feels, even more than a century later, so much sympathy for the family at such a devastating loss. The Paton collection at The Burke includes several carefully snipped and pasted obituaries and newspaper articles documenting Suvia’s death. 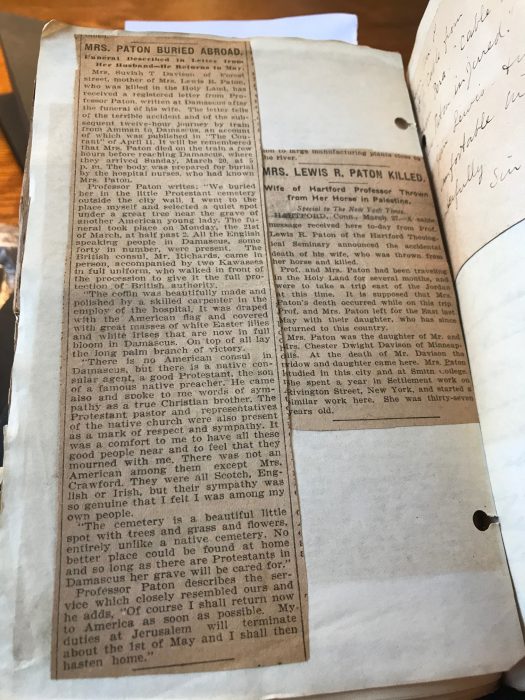 Lewis Bayles Paton went on to marry two more times before his death in 1932 and he enjoyed a successful career teaching and writing on diverse theological subjects. Anyone interested in Biblical geography, Western perceptions of the Middle East in the early 20th century, or personal travel accounts from a pair of adventurous Americans, should look to the Paton papers for illumination.

N.B.: The following post was written by Bo Reynolds, a recent M.Div. graduate from Union and current archives assistant processing the papers of Norman and Margaret Eddy with the generous financial support of the Eddy family. Read more to learn about Bo’s spring working with this collection at the Burke! And congratulations to Bo and the rest of Union’s Class of 2017!

Since November 2016 I’ve been working as an intern in the Burke Library, specifically hired to process the Norman and Peg Eddy papers. The collection is a large one, with their photos, journals, correspondence, and personal archives filling 86 banker’s boxes which, when lined up side to side, extend over 118 linear feet. Norman and Margaret (Peg) were both Union alumni, members of the class of 1951, and dedicated their lives to ministering in East Harlem, initially through involvement with the East Harlem Protestant Parish and continuing with the different ministries and churches which were the heirs of EHPP’s spiritual legacy. Norman and Peg’s family, particularly their daughter Martha Eddy, continue to be actively involved with the collection as they work on compiling a biographical narrative of their parent’s faith and service.

Peg and Norman, May 30, 1951, shortly after their graduation from Union. UTS1: Norman and Margaret Eddy Papers, The Burke Library at Union Theological Seminary, Columbia University in the City of New York

I have a greater grasp on Norman’s life than I do Peg’s by virtue of his many varied autobiographical efforts and his meticulous preservation of his journals, essays, work-related materials, and correspondence dating back into his year spent as an exchange student at The Stowe School in 1937-1938 (where he became acquainted with Christopher Robin, son of AA Milne, author of Winnie the Pooh). Norman later studied at Yale, while Peg studied at Smith. Norman completed his course of study at Yale early, leading the class effort to acquire their degrees ahead of schedule in order to be able to serve in the war effort; he volunteered for the American Field Service as an ambulance driver. 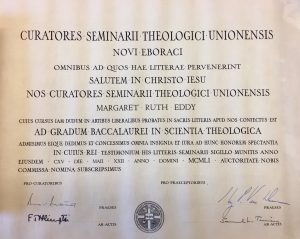 spiritual vision: His was in the Syrian desert, hers at a light house in Nantucket. They both sensed that the Holy Spirit was at work broadly within the world, drawing people of faith and goodwill into cooperative efforts to address social ills; they both entered Union Theological Seminary in 1948, married in 1950, and graduated and were ordained in Congregationalist churches in 1951. They had become individually aware of the ministry efforts in East Harlem by the East Harlem Protestant Parish during their time at UTS and became co-pastors of the 100th street storefront church for the first five years of their ministries.

Norman and Peg lived and worked in East Harlem for the entirety of their ministries, with a deep commitment not only to their parishioners, but to the neighborhood itself and its citizens. I am not studying archival science; I came to Union Theological Seminary in order to prepare myself for parish ministry in the Episcopal Church. As I spend time organizing, preserving, and reading the materials left behind by Norman and Peg Eddy, I am continually inspired by the work and faith of the Eddy family. Their energy seems boundless as they tackled school reform, local elections, the formation of a credit union, the construction of two new church buildings, a committee to assist those addicted to Narcotics, global travel, interfaith work, and numerous sermons and essays. Their love for their neighborhood and their neighbors is immediately evident the amount of support, tangible and intangible, that they gave through reference letters for first-generation college students, advocacy and pastoral support for the incarcerated, anonymous donations to families in need, housing and shelter for those who had none; the list goes on. 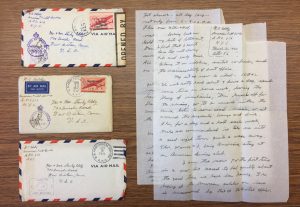 Some of Norman’s letters from WWII (January, April, June 1943). UTS1: Norman and Margaret Eddy Papers, the Burke Library at Union Theological Seminary, Columbia University in the City of New York.

I am mindful, however, not to stray into writing hagiography. Their life’s work came with great personal cost at times and there are many instances of setback, heartbreak, and frustration present in their letters and journals. For me, though, the Eddys represent a life of true solidarity with those that they served. They lived in the community alongside their parishioners and made the cares and struggles of East Harlem their own. I read and handle their materials with deep gratitude for their race well-run and for the opportunity to encounter their ministries and stories in such a deeply personal manner. As I graduate and move on from Union towards a life of ordained ministry, I will remember the example and faith of Norman and Peg Eddy as I seek to walk in solidarity with people of faith and goodwill in service to ‘the least of these’.