“I’ve never had the experience of writing to anyone in the army before. I suppose you’ve never written to anyone in jail before, so I guess we’re even.”  George Houser, July 17, 1941

George Houser and Roger Shinn first met as students at Union Theological Seminary, living across the hall from each other on the fifth floor of the dorms. The two young men, both sons of pastors, bonded in their early years of graduate school, frequently stopping by each other’s rooms for long conversations and playing on the same basketball team. As World War II escalated, they together began to question the role of Christians in matters of war and peace, and co-wrote an editorial in The Union Review about their correspondence with Canon Raven, a British pacifist. They shared admiration for Raven’s expression of his pacifism, and wrote together in the spring of 1940 that “in the ultimate analysis, the Christian must stand for the way of the Cross, and the problem of war is the place for our age to take the stand.” 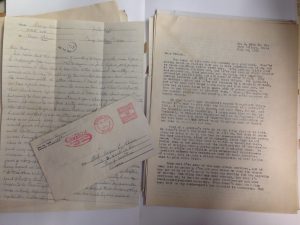 Ultimately, however, the two friends took quite different stands. Houser decided that it was his duty as a Christian to reject war and consequently refused, along with seven other students at Union, to register for the draft. He was subsequently arrested and served a year at Danbury Federal Prison instead of completing his degree at Union. Shinn not only registered for the draft, but waived the exemption he could have taken as a theological student. Rather than continue on with his doctoral studies after graduating from Union, he began basic training for the Army. Throughout Houser’s imprisonment and Shinn’s training, the pair maintained a steady correspondence. The conversations that had once taken place in their fifth-floor dorm rooms now occurred in letters as they continued to wrestle with their respective positions. Shinn held onto copies of the letters he typed to Houser, along with Houser’s handwritten responses from prison:

“I’ve been sending out Christmas cards this week. The two-cent stamps which I got at the post office have pictures of big guns on them and the words ‘National Defense.’ It seemed a terrible irony to be putting those stamps on Christmas cards… Reconciliation is so much more wonderful than fighting. I just don’t see how it can be accomplished until some other forces are crushed.”
– Shinn’s letter to Houser, Dec  22, 1940

“In the abstract-that is, in principle-you and I agree pretty much. But the more I think about the world situation, the more I feel that I would have to become a complete defeatist and cynic in order to support one side or the other in the war… The cycle has to be broken somewhere, and I think one of the important points at which to break it is at the point of the method of war.”
– Houser’s reply to Shinn, Dec 26, 1940.

Even as their differing positions took them further and further from each other, Shinn and Houser diligently reminded each other of the shared aspects of their convictions. The tone of their letters remained light even as they disagreed, with friendly banter and frequent apologies for not having the time to write more. As Shinn’s number came up in the draft he wrestled with whether or not he should join the Army or take advantage of his exemption as his mentors, Reinhold Niebuhr and Henry Sloane Coffin, advised. When he decided that, given his support for the war he felt compelled to serve in it, Houser was one of the first people he told. Houser wrote back disagreeing with his friend but supporting his decision to accept the consequences of supporting the war.

“To me it is impossible for a person to accept comfort and luxury for himself while others are suffering and deprived. This is an eternal criticism of the faculty of Union Seminary as far as I am concerned. How Reiny [Reinhold Niebuhr] can do it is more than I can see. The danger of his position is just that of not ceasing to compromise. Of course I expect nothing different from Uncle Henry [Henry Sloane Coffin]. So I think from this angle, your choice is right…”
– George Houser, Feb 20, 1940

Neither friend shied from challenging  the other to change his mind. As Shinn prepared to go to war and Houser realized that he would not be able to return to Union, their letters tell their sadness about how their paths, and those of their community at seminary, had diverged. This sadness and the strength of their differing convictions only made their theological and ethical debates more urgent.

“…It is not like a year ago, when we could brush past our differences by simply saying of the other fellow, ‘he’s sincere,’ or ‘he’s a good fellow.’ When you actually believe thoroughly that the other man, if his policies were carried out, would plunge the world into turmoil and chaos, or remove any possibility of historical justice, then the differences cannot be reconciled breezily. Unity, then, must lie in a faith more profound than the church has usually preached.”
– Roger Shinn, July 4, 1941 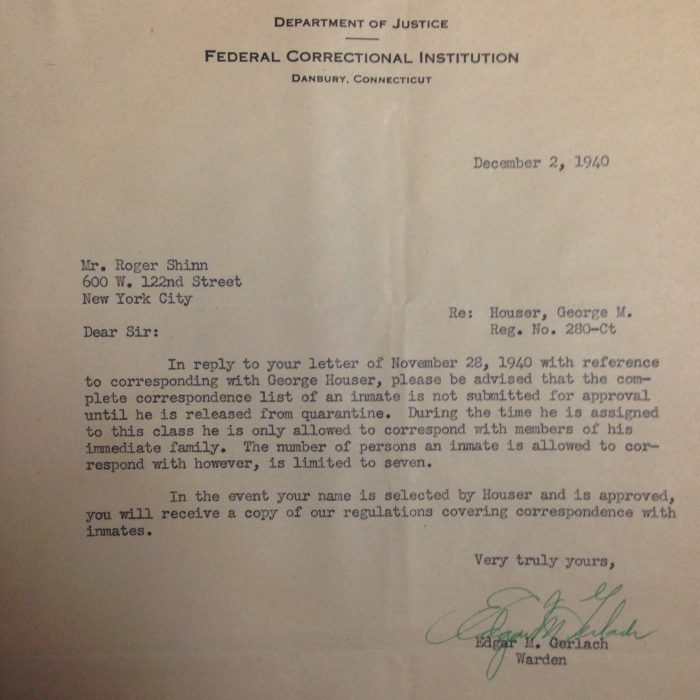 A letter from the warden of the Danbury, Connecticut prison where George Houser was incarcerated, notifying Roger Shinn that he is not authorized to correspond with Houser.

After 1941, the correspondence between the two men appears to stop. No more letters to or from Houser appear in the Shinn collection. Their lives continued to head in different, though related, directions. Houser moved to Chicago to work for the Fellowship of Reconciliation, a pacifist anti-war organization, and then turned his attention to civil rights issues within the United States. He helped to found the Congress for Racial Equality in 1942 and participated in the original Freedom Ride before devoting the rest of his career to abolishing apartheid and colonial rule in Africa. 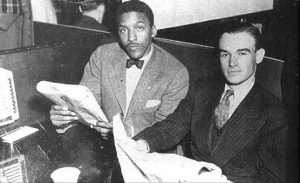 Shinn, meanwhile, served in World War II and was held as a prisoner of war. Upon his return, he completed his doctorate at Columbia and enjoyed a long career at Union as a faculty member, dean of instruction and, briefly, acting president. His participation in later political activities at Union is particularly notable in light of his earlier friendship with Houser. When Union students again refused to register for the draft during the Vietnam War, Roger was one of the faculty members who wrote a letter supporting them. He also was among members of the Union community who published a statement regarding apartheid in South Africa in 1967, and worked through the 1980s to divest the Seminary’s endowment of shares in companies profiting from apartheid. Although the former hallmates chose different ways of living into their convictions as Christians, it seems that throughout their lives they continued to “agree pretty much.”

Today is our inaugural stressbuster where we will be offering up coloring books and sweet treats!  The coloring book was created using images of items within our amazing special collections.  For those who are unable to come and who want to follow along at home we wanted to share the pages as well as a PDF of the entire coloring book here on our blog.  Feel free to print out and color in from wherever! 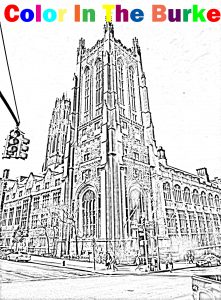 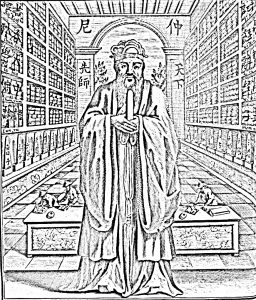 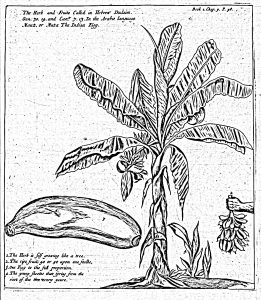 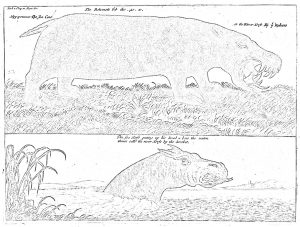 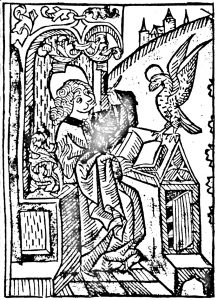 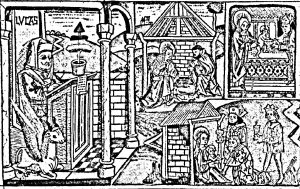 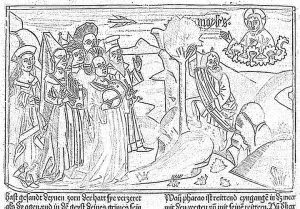 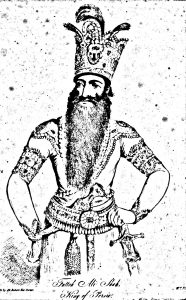 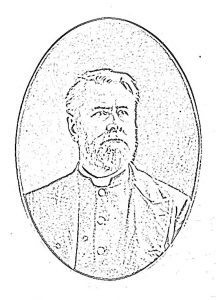 In honor of the Burke’s first “coloring book,” created for a stress buster event the library is hosting for Union Theological students next week, I thought it would be nice to show off this sweet children’s coloring book from ca. 1920: 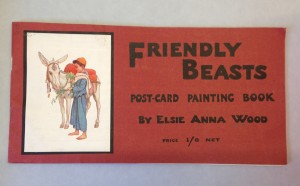 Each page offers a new image (x3) to be painted in with the way it should be painted in attached.  The image below shows what the backs of the pages look like.  Children could paint these in, then tear along the perforated edges to mail off as a post card. 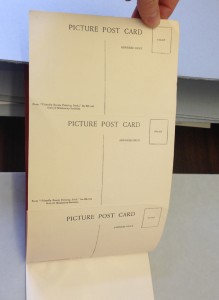 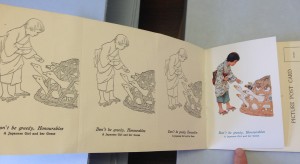 My favorite aspect of this book are the instructions given at the end,”Read this before Painting the Pictures”: 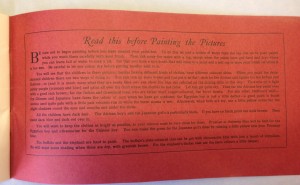 Before going into great detail about how each of the different skin tones should be painted, it instructs the child to “Be sure not to begin painting before you have cleaned your paint-box.  To do this let just a trickle of water from the tap run on to your paints while you wash them carefully with your brush.  Then dab away the water with a rag, except when the paints have got hard and dry – these you can leave full of water to soak a bit.”  Just to give you the reader a little perspective below is an image of my daughter’s paints.

This was not quite the neat image of a paint box conjured when reading those instructions!

This children’s coloring book is part of the Mission Research Library pamphlets held by the Burke Library, many of which are fully digitized and available on the Internet Archive.

Creation of the Burke coloring book referenced in the very beginning was inspired by the inaugural #ColorOurCollections week (February 1-5) started this year by The New York Academy of Science Library.

Since the beginning of 2016, I have been working to finish up some processing projects in the archives. In particular, I have taken over the initial processing of the papers from former Union alumna and Professor Ann Belford Ulanov. These papers start with her work from her student years at Radcliffe College and end as faculty at Union Theological Seminary. A much larger portion of the collection covers Dr. Ulanov’s career within the Psych and Religion Department at Union as well as the manuscripts she produced. 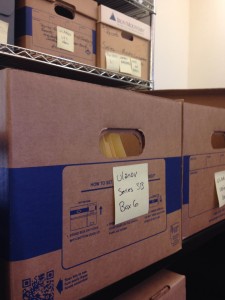 Although it is always such a wonderful feeling to finish up a project, continuing to process another person’s work can at times be difficult. Sometimes you have an outline of what to expect and others you will just have to dive right in and see for yourself. For this collection, a fair amount has already been processed and what I have been doing is tackling sub-series, piece by piece, to make sure that what it contains does not belong elsewhere. This has been my first collection where I am using my judgment in such a way and it has been very educational.

Of course archivists cannot really read while doing this initial level of processing. I just have to peruse enough to figure out what each piece is and put it with similar items in large folders. Yet still, I love that I get a sense of who a person is by their papers. What kind of correspondence did they keep? What voice did they use with students, peers, and members of the community? What mementos did they keep years later? How did they organize it all?

With the portion Dr. Ulanov’s papers that I have been working through, I have been able to get an interesting portrait of who she was during her time here. It spans decades and I even saw hints of old arguments that are still alive on campus today. As I write this, I am winding down to the last box out of 7 in the last sub-series to be accounted for. There is still quite a ways to go, but I feel getting it all done will leave me with a lovely sense of accomplishment.