I took one class on Syriac while I was a student at Union and I was immediately in love.  It combined the structure of a semitic language with seriously fascinating theology and had the added bonus of being relatively obscure. If there’s anything I love, it’s languages few people have any use for. Imagine my delight when I started working at Burke and realized we had a collection of Syriac manuscripts that were uncataloged.  That was almost 4 years ago. Now, thanks to a supportive director, enthusiastic co-workers (both at Burke and Butler), and my need for a final project at library school, we’re finally able to start working on them. 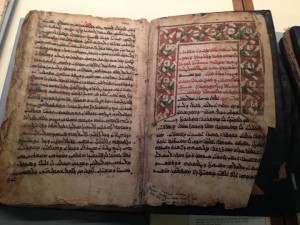 About the collection: Burke has 48 manuscripts, ranging from single page fragments to a large, red leather-bound volume with hundreds of pages. Most of them were acquired in the late 19th century, many specifically produced for Union.  Writings like these were most often acquired from monasteries, since early religious texts were almost always produced by monastic scribes.  Monasteries were generally unwilling to sell their own originals but collectors could purchase copies.  There are a number of print catalogs describing these manuscripts, most notably Goshen-Gottstein’s  Syriac Manuscripts in the Harvard College Library, in which Union’s items are included as an appendix. Most of the manuscripts come from Urmia, Iran, which is evidenced in the heavy use of eastern scripts. There are also a few manuscripts written on what almost looks like loose-leaf paper. At first glance these look like they might not be of much interest, but in fact a few of them may be among the only extant versions of the originals from which they were copied. 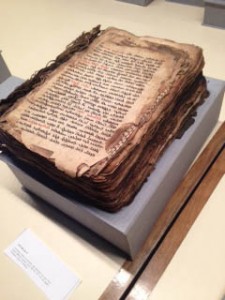 About the project: The goal is to make these items findable for researchers who are interested but either do not have access to, or are unaware of, the print catalogs.  Each of the 48 manuscripts will have its own record in CLIO with the most complete description possible.  We will include much of the information from the Goshen-Gottstein catalog but will need to make some changes. Many of the titles assigned in that catalog do not reflect the titles that are on the items themselves and none of them are in Syriac. Our priority is to reflect as much as possible the way the item describes itself, rather than deciding what we think it should be.  This process actually one of the reasons cataloging has become my main area of interest.  Assuming the authority to decide how to describe an item can be a fairly straightforward process with modern print books: record whatever title it presents, the names of any contributing people/organizations, date, size, etc.  The introduction of standardized identifiers like ISBN’s also creates a level of certainty that the book I have is the same as the book you have.  With manuscripts, its a different story. With manuscripts in non-roman characters that read right-to-left and deal with religious materials, it can be a different universe.  There are issues with where, exactly, the title is to be found, how it is recorded, how to identify an author, scribe or other important contributor.  Dating is an adventure in itself.  Many of these manuscripts are dated on the Seleucid calendar and so need to have the original date recorded, along with a date converted to the Gregorian calendar.  As far as any of us can tell, this project will be the first time a Western library has cataloged materials using Syriac characters. In the past most titles were either created in English or transliterated. The transliteration table for Syriac was only approved by the Library of Congress in 2012 and our main cataloging program (OCLC) only added support for the Syriac fonts in 2014. This means that we will have a unique opportunity to represent these materials in their own language, in their own scripts, using their own terms. Other descriptive elements will be in English, including subject headings so the items will be findable for anyone.  In addition, we will likely include a transliterated title to add another way to locate the materials.  The ability to let items speak for themselves is perhaps more important than ever in an age where self-identification is what people have come to expect. It is also easier than ever given the (relative) flexibility of newer cataloging tools. 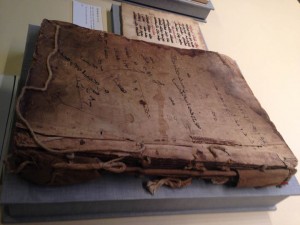 About cataloging: Cataloging has changed a great deal in the past few years and the movement toward ever-interconnected searches has created flexibility in some areas and rigidity in others. The need to confirm the same-ness of people, places, titles, etc. means that standards terms have to be established so that different libraries can be sure of whether or not they have the same items. There is a lot of completely dry literature on this (I have seen email chains go on for days about the punctuation at the end of an author field, seriously) but for me the interesting part is the authority to establish those names. For example, one of the scribes associated with our manuscripts is recorded as “Ruel” and “Ribal.”  We will have to decide which of these spellings will become the formal way in which any manuscripts copied by this person are attributed, and which will be added in other parts of the record as “variants.” Anytime we want to include a reference to Urmia, we will need to also include a reference to “Urūmīyah (Iran),” since that name is already established by the Library of Congress as the form to use.  It is certainly a small exercise in authority, but when you’re talking about western catalogers dealing with non-western scripts, these decisions matter. Not only do they dictate how these items will be connected to others like them, they say a lot about how those catalogers perceive the items they have in hand and the larger culture from which they come. For example, early catalogs of Syriac manuscripts tend to refer to eastern scripts as “Nestorian.”  The term is a loaded one since it has its roots in the split between early Christians over the relationship between Christ’s humanity and divinity.  “Nestorian” is a term that came to be applied to one side, was not an identity that they chose for themselves, and was often used in the context of heresy. The term was expanded to describe the script of manuscripts produced in the regions where these Christians lived, and the name sort of stuck.  So, early collectors with relatively little knowledge or regard for how the producers of these works would care to be identified continued using the term.  We will not be using the term “Nestorian” in our descriptions. For now, the term “Madnḥāyā,” or “eastern” will be used, since it more accurately represents the geographic region that produced a particular script.  All of this is really just a long way to say that, however stiff and clunky you may think the catalog is, know that we are always trying to make it better and more reflective of what these things are and how best to find them.
The project is slated to be completed by the end of Spring 2015 (assuming I want to graduate, and I do).  In the meantime, enjoy the pictures and check out the print catalogs!