The Thompson Collection — 77 printed works as well as 9 manuscripts acquired in 1923 as a gift from philanthropist Mary Clark Thompson — comprises a small but important section of the Burke Library’s special collections, containing several of its most celebrated printed Bibles. These include the 1611 King James Version, the 1661 Algonguian Bible (sometimes called the “Eliot Indian Bible”), and the Hebrew and Greek testaments owned and annotated by poet Elizabeth Barrett Browning.

The Thompson Collection includes a copy of the first book printed in the Ethiopic: the Psalterium Aethiopicum. (The work is also known as the Psalterium David et cantica aliqua in lingua Chaldea, reflecting the erroneous belief on the part of its sponsor and publisher that Ge’ez — ancient Ethiopic, now used primarily as a liturgical language — was related to the near eastern language Chaldean.) In order to print the work, the Ge’ez type had to be designed and cut, an important moment in the history of printing technology. King’s College London has digitized their copy of this work as an online exhibit well worth further exploration.

The Burke Library also holds 5 Ethiopic manuscripts, dating from the 18th to the 20th centuries. Ethiopic Manuscript 5 was partially digitized, showing here both an illumination of Christ as the Lamb of God as well as its maḫdär, a leather satchel used for transport. 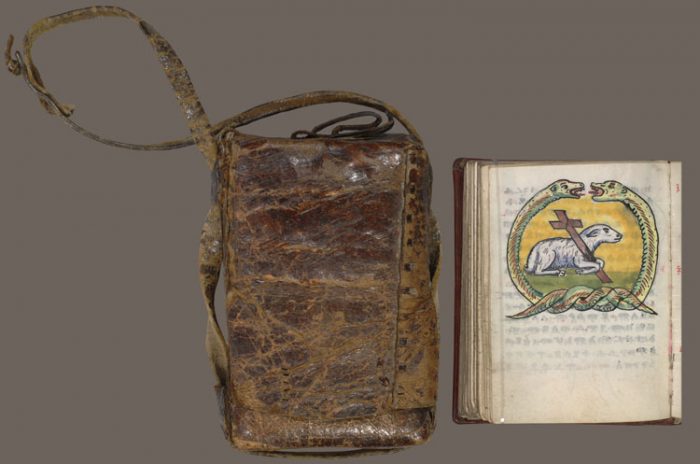 A passage from the 2005 Columbia University Libraries exhibition of which it was a part provides further some context:

This collection of Ethiopian magical prayers includes those that can be used against demons for each day of the week, and prayers for overcoming enemies. It also includes “images,” an “image” being a hymn in honor of a saint in which the different members of his or her body are addressed in successive stages. The book is bound in wooden boards covered in reddish tooled leather in which crosses have been worked. The leather carrying case was used to facilitate easy and safe transport. The manuscript’s elegant script is enhanced by two kinds of decoration: abstract, linear motifs that highlight textual transitions and figural representations. This is a fine example of an African-Christian culture to which the African-American community has, from earliest days, looked as a source and model.